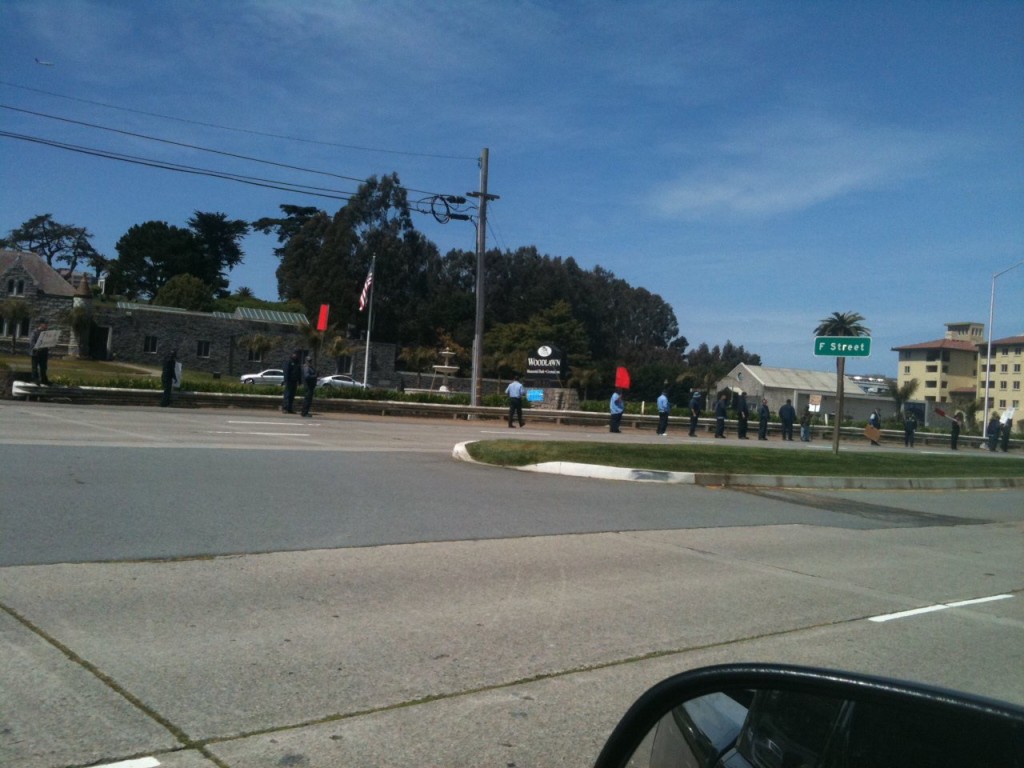 Locked out employees picket at Woodland Cemetery as out of state corporation works to reduce wages.
Photo Courtesy of Phil Fioresi Sr.

“12 workers from Local 256 have been locked out of work at the Woodlawn Cemetery by the owning company Service Corporation International in Texas. This company wants to reduce wages by $2 when the current wage is $17-23. Some of these workers have been with Woodlawn for decades. So when you drive by give these guys a Honk in support!” reports Phil Fioresi Sr.

After we shared this our Facebook Page, there were many comments about the idea of striking in this economy as well as out of town corporations coming in and making cut backs. Here are a few shared comments from our Facebook Page

Dino Fontana: Strikes never turn out well in this economy… Too many out of work people willing to scab!

Ray Galarza: Please report more of the facts on this “story” before suggesting that we all support these workers. This economy f**king sucks and we can all honk about that but to flat out support a strike is just stupid imho (in my humble opinion). If it was me and the choice was take $2 less or have no job, the answer is stupid simple for me; I’ll take the $2 less in this economy! My kids can’t eat on pride.

Antonio Gomez works to add some levity to the conversation: Yeah, people can scab, but remember, these workers know where AND how to dispose of bodies!! j/k people!

Karen McEvoy:  Thanks Antonio, and my husband is one of the ones that can dispose of a body. Lol (laughing out loud)

Angela DeBenedetto replies to the jest: I can too

Antonio Xavier Gomez continues: Okay .Seriously. Has Woodlawn Corporate seen a drop in deaths/customers? Have THEY lowered their prices to reflect the economic downturn? Has Corporate also lowered their pay, benefits dividends? Have they seen an opportunity to make more money at the expense of workers? I see only one answer to their move.

Angela De Benedetto: We’ve a lot of South City folk employed here in Colma and when big conglomerates come in and trim wages while bumping up their bottom line, SOMETHING needs to done. Like everything else, cemetery prices have increased, management would’ve done better to cut staffing rather than reduce wages. I understand that desperate times call for desperate measures but the union that protected them years ago isn’t doing squat for them now. I would think Woodlawn’s large Asian customer base won’t be affected by having to pass by striking workers.

Antonio Xavier Gomez: Which Woodlawn is also capable of offering to their customers. Why must they profit from cutbacks to the working stiffs? (as opposed to the “stiff” stiffs)

Karen McEvoy: Woodlawn is racking in big bucks on the burials for Asians as they spare no expense when it come to their burials. I am sure corp. in San Jose and Texas has not made any cuts. I worked for Woodlawn for a year over 10 years ago and they are cheap Bas**ards. Also for what they charge the customer for a cremation and what the cost is to them as they do it on site is a very large markup it well covers the employees cost of labor and all the office overhead and profit.

Everything South City does a little digging and shares this:  ‘During 2010 Service Corporation International paid cash dividends totaling $40.0 million & accrued $9.6 million for dividends paid on January 14, 2011. Year of 2009 cash dividends totaled $40.2 million. The Chairman of the Board, Mr. Robert Waltrip rec’d basic compensation of $3,988,820 with options $ 8,694,603 which put the value at $15,109,510 This is according to their 2010 Annual Report. Robert’s son Blair is also a Board Member and has been an independent investor, primarily engaged in overseeing family and trust investments and he currently holds $17,685,600 in exercised options. There appears to be 26 members on the Board of Directors with each receiving ‘generous’ compensation’

David Valencia: Corporation this, corporation that. I know they can be evil but you also have to remember; corporations create jobs for people, government suppresses them.

Juan Bustos: However, they want to pay Texas wages and charge, you the consumer, California prices. Remember, why gas prices are they way they are? Look at the end of year corporate earnings and then tell me how the government is suppressing them. I stand corrected if I’m wrong -but not likely.

Laura Lee Grimes: Wish I was there to honk! All for the workers.

Whitney Connors-Pasion: Aw!!! That’s sad!!! They take care of my Mommy and my “brother” Michael!!!!

David Valencia responds: You miss understood me Juan. The government is suppressing the people. While corporations can be evil they create jobs, but the government favors the business world to line their pockets in exchange for hardly any regulation.