By The Belli Family

Specialist Jonathan Belli is a member of the Army National Guard 235th Combat Engineers in Petaluma. The unit deployed to Afghanistan in February 2009. They were based in Orgun-e, in the south east region in the mountains near Pakistan. Jon’s main duties were as the 50-Cal gunner on a Huskie, and doing some medical assistance. As Combat Engineers their unit did route clearance, clearing the roads of IED’s.

In June he received a head wound due to an explosion and received a Purple Heart. While on a mission in the early morning hours of July 19, 2009 the Battalion was ambushed in a valley. While engaging the enemy Jon was shot in the chest, not realizing the severity of his wound he continued to fire his two weapons, reloading several times. He continued shooting until he ran out of ammunition and went down from the turret of the vehicle to have someone give him more. He then became very weak and realized how badly he was shot. At the same time the vehicle was hit by an RPG, causing him to fall back hitting his head and blacking out shortly. Jon reached his hand under his vest and realized the severity of his wound. With the other soldiers engaged with the enemy he had to tend to his injury on his own, using compression bandages and pressure. Another soldier climbed up into the turret to continue firing at the enemy. The gun was stuck and Jon had to give him instructions on how to fix it. The battle continued for at least another 20-30 minutes until the convoy was out of the area before the medical helicopters were able to better tend to him then take him back to the base.

From his base he was lifted to Bagram Air Force Base to receive medical care. The bullet that struck him went through his lung, missing his heart by millimeters and shattered several of his ribs. The doctors had to remove approximately ½ of his left lung. From Afghanistan he was sent to Germany for two days then was transported to Walter Reed Medical Center in Washington D.C. On the flight over his other lung collapsed causing more difficulties for him. Jon was in the hospital for almost three weeks, and then was on out-patient care until the end of October. After his release from Walter Reed he came back to California where he is still under medical care at the San Francisco VA Hospital and is attached to the Wounded Warrior program in Sacramento.

Jon is still recuperating from his wounds. His ribs are still healing, two were shattered two were broken, and part of one was removed. The effects of PTSD continue to bother him. Fortunately, the care he is receiving from his medical team is helping him. Currently he is waiting for the Army to determine his future status with them. He would like to be placed back with his unit the 239th Engineer’s. 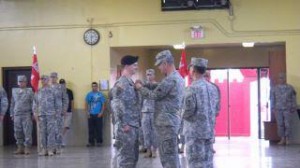 Just recently he was presented a Bronze Star with Valor for his service. He has also received two Purple Hearts and was recommended for the Silver Star. Upon learning of his heroism both his home of South San Francisco, his high school and Senator Jackie Speier presented him with Declarations regarding his heroism.