April is Earthquake Preparedness Month – Are You Prepared? 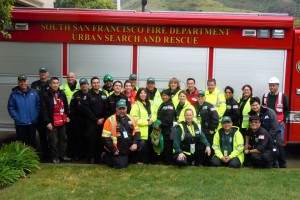 South San Francisco Fire Department began the Community Emergency Response Training program back in 1994 under the direction of then Fire Chief Andrew Stark. City staffer Susan Kennedy did most of the training along with our firefighters and they ran a great program.  Students of the very first class included Council member Pedro Gonzalez and his wife Eldie along with 20 other residents. At that time the program was called N.E.R.T., Neighborhood Emergency Response. Kennedy held weekly classes for new training and monthly refreshers for graduates of this program along with many drills allowing C.E.R.T. to utilize skills learned.  In 1997 Chief Stark made a change to Pacifica Fire Department and Russ Lee became our Fire Chief after 18 years as our Assistant Fire Chief. He remained committed to our C.E.R.T. training and the number of graduates from this program rose to over 200.

From those 200 C.E.R.T. graduates, five smaller neighborhood groups were formed reflecting the areas to the closest fire stations. These smaller groups began to meet so they could build up a cache of emergency tools that could be shared in their area if a disaster struck and they also continued training led by our Fire Department.

Budget restraints caused this program to lose funding and it was dropped by our city although many of the neighborhood groups continued to meet up helping others with planning and preparing for emergencies.  Team 5, named because of their close proximity to Fire Station 65 off of Hillside Blvd., is the longest running South City team and has retained many of the original members including Sonny Koya and Ham operators Joann and Ron Swanson.  They continued to meet with several other members to share information and to educate new neighbors on the basic preparedness plans.

F.E.M.A. After 9/11 F.E.M.A. saw the need to fund this program and due to our city’s excellent grant writers, our C.E.R.T. was reborn under the direction of current Fire Chief Phil White.  In 2007 the new C.E.R.T. program began with Fire Captains Bryan Saenz and John Grimaldi before it was passed over to Battalion Chief Chris Campagna. Currently Ken Anderson Sr. is the SSFFD C.E.R.T. Coordinator in addition to his other duties of BLS (Basic Life Support) Supervisor, Health and Safety Division, and AHA (American Heart Association) Training Center Coordinator. The training is now listed in our Parks and Recreation Leisure Guide brochure with the cost of $20 for residents and $80 non-resident fees. 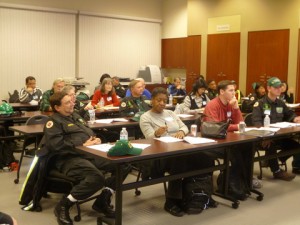 At the heart of this program is the empowerment of our residents to know what to do to safely navigate disasters through preparation and planning.  The training is done over a seven week period consisting of five 3 hours sessions and two 8 hours sessions and includes:

Upon completion of this training, graduates are encouraged to become part of our C.E.R.T. Team and meet monthly to hone skills and gain new ones.

Currently over 400 residents have taken this course with about 100 active team members that work to meet monthly. While the primary goal is dedicated to emergency preparedness our members also volunteer in our community.  Members have stepped up to assist with the S.S.F. Community Preservation Task Force in neighborhood clean ups and for traffic control for the ongoing E-Waste collections. C.E.R.T. members helped serve pancake breakfasts on the morning of our Day in the Park and manned a booth as an outreach to the community, participating in fire extinguisher drills with the F.D. and helping out as needed. Our team was activated during the severe storms of January 2008 and was assigned to go to each licensed day care and senior care residences to be sure all needs were being met. Since 2008 our C.E.R.T. has represented at the annual San Mateo County Disaster Preparedness Day held at the San Mateo County Fairgrounds in September and showcased the many ways our program has benefited our city. C.E.R.T. members can also be found at many other fairs and events within our city as they strive to get the word out to all, be prepared. 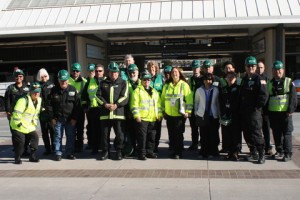 2009 was a busy year and found our active members in uniform and participating with the county outreach, Silver Dragon, an exercise aimed to see how many households could be reached in the event of a pandemic and medicines were needed to be delivered.  Our first year saw 10 members reach 700 homes in an hour, dropping off literature to each home. We continue to be involved in this annual event and this past March had over 20 members participating.   Ten of our members joined 200 members in the Sacramento and Clovis C.E.R.T. area drill which included three major scenarios; crashed car, collapsed pole/wires and the building behind it, and a train wreck. Valuable skills were picked up and shared with our whole team upon their return.

After last year’s tsunami in Japan, our C.E.R.T. reached out to 300 people to help them become informed on emergency preparedness up at the ELKS Lodge Fundraiser for victims. Each year you can count on members helping out with our fire department’s holiday toy drive and other programs aimed to help our community.  Members also continue education online via the F.E.M.A. classes offered.

Jackie Largomasino, event chair for this past Chevy’s fund raiser, is looking for other ways to help fill in C.E.R.T. expenses that have been eliminated by the budget restraints. Thanks to Chevy’s and to all those that showed up on the 19thfor helping us raise over $200. The dining room was filled that evening with many supporters including hubby 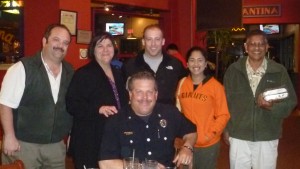 Within our active team we have 18 ‘Ham Operators’ whom are committed to emergency communications. The name ‘ham’ is an informal term referring to ‘amateur radio operator’ and the origin of the word ‘ham’ is not officially known.  The three levels of ham licensing are Technician Class, General Class Ham, and Extra Class Ham and F.C.C. testing is done at each level. It is interesting to note that this December amateur radio operator and station licensing by the U.S. Government will be 100 years old.

Founding C.E.R.T. members, Joann and Ron Swanson, had their Ham Licenses before becoming involved in the C.E.R.T. program. In July 2008, with the addition of Diana Serchia, a Coast Guard Auxiliary member, more interest was shown in this method of communications and the practice ‘Learn One, Do One, Teach One’ became the mantra as more C.E.R.T. members studied, took classes and passed F.C.C. licensing.  In January SSF C.E.R.T. Ham Operators put up the radio tower for high frequency radio at E.O.C. (Emergency Operations Center) at Station 61 on Canal. This required measuring coax and running it through the wall of the E.O.C. and down to the radio, attaching it to the tower, and securing it so that it is safe when the tower is raised and lowered.  Our ham operators now do a weekly relay with other ham operators throughout our county as well as help other members prepare for the F.C.C. licensing tests.

How To Prepare For Emergencies

There is no substitute for the actual training yet there are certain things neighbors can do to plan and prepare for emergencies.  The gas explosion in San Bruno really brought it home; disasters can, and do, strike at any time. Here are a few suggestions to get you started:

Remember we live in earthquake country and we must be prepared.  Ranking as a higher concern with the USGS is the potential ArKStorm scenario of major flooding as it occurs in California every 100 years.  Folks are encouraged to think of a few ‘escape’ plans in the event of any emergency and practice it regularly with your household. 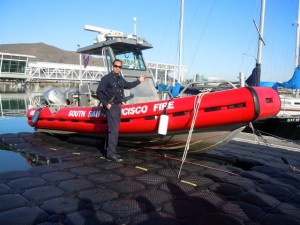