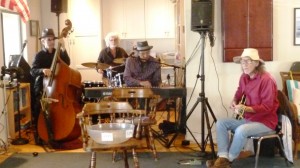 Blackman on piano Dorsey on Drums, Nathan on Bass, guitar player sitting in

Got the Blues in Brisbane

Sierra Point Yacht Club in Brisbane boasts some serious rhythm and blues on Sunday afternoons, played by Macy Blackman and the Mighty Fines.  Our area is very fortunate to be able to showcase such talent, one look at their calendar and you know they are in high demand and for good reason.

Leadman Macy Blackman is a transplant from the East Coast moving out west in 2000 to teach at U.C. Berkeley. Blackman teases and pleases the crowds with his New Orleans style as he tickles the ivories and belts out the blues. He not only masters the keys, he also teaches and is a master piano technician. It’s in his blood and you can hear it through your toes. 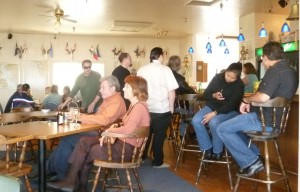 Joining Blackman on drums since 2003 is Jack Dorsey, another East Coast transplant that has made San Francisco his home since the ‘60s. Dorsey is known for his recording work internationally as well as a teacher in many of our Symphony programs in San Francisco and the East Bay.

The standup bass couldn’t get any sweeter when Bing Nathan plucks her strings, she sings.  A graduate of Oberlin Conservatory, Nathan is well versed in all genres from country swing to bebop to classical R&B. He also has his own group, The New Bing Thing.

Ken “Snakebite” Jacobs and Nancy Wright round it out with some major sax wailing according to regulars, although they were not playing the Sunday we stopped in. They will be back next Sunday April 22nd. Blackman is known to have other musicians sit in and enjoy a few tunes as he did this past week.

The Sierra Point Yacht Club is a picture perfect place to meet up with friends on a Sunday afternoon on the water. Reasonable priced drinks and appetizers available for people of all ages.  More information on Macy Blackman and the Mighty Fines contact (415) 515-4184.