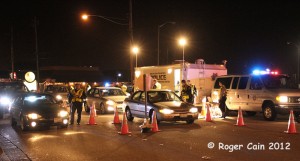 “Quick stop, turn around!” I yelled to my husband while we were driving down South Spruce two years ago. “There is a SWAT in progress; we don’t need to be anywhere near here”. In front of us was a large operation with flood lights and roads blocked off and enough police for me to know this was not a place for ‘looky-lous’ or residents just passing by.

Before we could make a turn, a cop hand signaled us into a que lined by orange cones and under extreme lighting. There were more police in that one location than I have ever seen before.  Cars were stopped in front of us and we watched as cops stopped and talked to each driver.  What was happening, I wondered nervously?

As we moved up in line, an officer approached the driver’s side and asked Dave for his license and while checking that out, he further inquired, “Have you had anything to drink today?” My husband replied no and he was given a note and waved through the line.

It took all of five minutes yet I was upset over what seemed to be an invasion of our rights, to be stopped without cause and asked to present I.D. and to answer what seemed a tricky question. “Have you had anything to drink today?”  Well of course he had; coffee, water, juice, yet there was that tapping at his mind, knowing this was probably a D.U.I. checkpoint and the best answer was a no.  To see such a production and to think about the cost to our city seemed an outrage as well. It seemed overkill and I wondered how much information was gathered and how it was really used.

Was this an opportunity to look for safety issues with the cars? To keep track of residents? To seek out those here illegally?  Was this another way to be aware of any gang activity? Yes, I know the note said D.U.I. yet I wondered what other information was being collected.

FROM THE OTHER SIDE OF THE LIGHTS

This past Saturday night I was once again under the lights on South Spruce Avenue, yet this time reporting on the D.U.I. checkpoint that was in progress under South San Francisco Police Department.  I greatly appreciated this opportunity to see things from another vantage point which led to another opinion of this practice. With me was Roger Cain, our professional South City photographer. 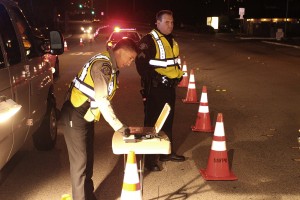 Lieutenant Keith Wall was the man in charge of this operation which included 20 officers, 3 Explorers, and 2 dispatchers dedicated to this event.  Lt. Wall is also our Department’s chief grant writer and his hard work brought our city $173,000 in grants from the California Office of Traffic Safety (OTS) and National Highway Safety Administration (NHTSA).  Of these monies, $120,000 is being used strictly for overtime to keep our police saturating the streets to conduct traffic enforcement activities, including D.U.I. and License check points.  This was the first one and there will be two more this year.

Lt. Wall explained the purpose this night was solely to weed out any impaired drivers and those without licenses because statistics show those drivers have the highest incident of accidents and injury accidents.  He also was very strict that his officers detain drivers for the shortest amount of time and it appeared cars quickly and smoothly passed by. Licenses are now run through a strip scanner to determine if they are legitimate and not suspended.  No other information is gathered and no additional notes were taken.  I also learned that they were not checking for registration and proof of insurance as I previously believed. 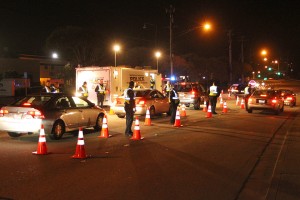 Officers line up so they can quickly process the drivers and get them going once again. The Command Center is seen in the background.

During the time I was there, four cars were taken over by officers; three had unlicensed drivers and one driver may have been under the influence.  The drivers and passengers were politely escorted to the parking lot for further inquiry as an officer drove the car into the lot.  New state law now allows an impaired or unlicensed driver to call a licensed driver to pick up the car rather than having it towed.  Most passengers were already on their phones before they even left the vehicle and most were picked up quickly.

Gerry Duenas of SBAC Tow located at 965 San Mateo Drive, San Bruno explained that there were three towing companies on hand, each with two trucks. Officers rotate each company as towing needs arise.  Towing services are also shared with Courtesy Tow 980 Montgomery San Bruno and Bob’s Tow on Linden.  Since the new law has been in effect, towing services have been down yet the drivers are often kept busy all night.  Some nights and locations will receive only 300 drivers and other nights as high as 1200. Impound costs are generally $60 per day with extra after hour charges for pickup with towing charges ranging $200-250. A new automatic counter set out by our police department will now monitor the amount of cars that pass.

Seeing things from the other side of the lights made me realize that each and every officer had a specific duty to perform and the smooth operation depended on each one working together.  To reach Lt. Wall’s goal of having our neighbors in line for less than two minutes requires team work.  Officers line the two lanes talking to the drivers while other officers run the license to the computer to be scanned.  When a driver needs to be removed from a vehicle, more officers are needed to remove the car from the que and to further question the driver. Other officers were busy doing reports and some were training our Explorers, our police officers of tomorrow.

The SSFPD Command Center was also on hand which allows continual communication with our department via RIMS program which also can share information with neighboring cities. While it didn’t appear this was needed on this evening, having it available for teaching purposes is highly important as we saw with its usage during the San Bruno gas explosion.  While keeping impaired and unlicensed drivers off the road is the main goal, this was also a great exercise in teamwork and using equipment that might not be used on a day to day schedule. As I watched passengers exit their cars I realized the need for the high lighting, as well as for the officer’s safety as they crossed the roadway, and for those in the parking lot area.

Seeing the faces of those that passed by I recognized the anxiety and impatience in many.  Yet having been invited to watch this from the other side I saw how friendly and polite our officers are and how committed they are to keeping our roads safe. There was no hidden agenda after all. 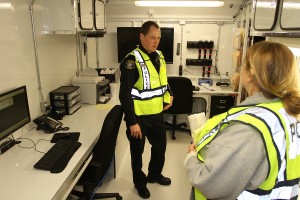 I kept thinking of Lt. Wall’s comment about the high stats of accidents caused by impaired drivers and the cost of keeping just one of them off the road. Is it really worth the cost? Then I reflected on our photographer Roger and his experience, up front and personal.  His stepson, Dallas Norman Jones, was 20 years old when he was killed by a drunk driver on Thanksgiving weekend of 1997 in Michigan. His killer? He had been convicted three times for DUI, in the states of Colorado and Michigan. Maybe if that drunk driver had been here in South City with our active programs Dallas would still be here today, and I have to ask; what is the cost of a life?