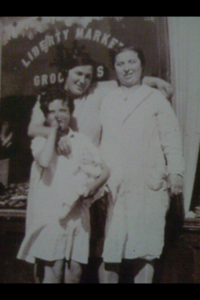 Memories from a South City native

South San Francisco was a home for me long before I was even born. My family moved to South City back in the 1920’s and bought up an area of property and buildings. They eventually started businesses and built their homes on the land. To this day the Bottini family is well known among the older residents in South San Francisco. One of my favorite parts about South City (as it’s been dubbed by it’s residents) is the older residents who could give you history of not just the city, but the people, the atmosphere, the gossip, and the life of the families and neighborhoods.

For a city with a population of over 60,000 people it has somehow managed to keep it’s small town feel for over 100 years. Most families have lived in South City for generations, however one may also meet families who moved into town when the East end of Grand Avenue gave South San Francisco it’s infamous name “The Industrial City”, and even more recently, families who moved to town when the biotech industry moved in and took over Oyster Point.

When I go back to my childhood memories, South City was about long days and cold windy weather, beautiful sunsets with all too many telephone and cable wires hung in every direction; bike rides down Spruce, Grand and Linden, and hikes up Sign Hill. I would have lemonade stands in front of my house, bike races down our one-way street, and rolling races down the grass of my yard. South City was a safe haven for me. 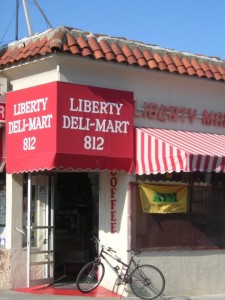 The neighborhood I grew up in was not only the same neighborhood, but also the same house that my grandmother was raised in. There were four homes on the street, which stood in a square of two on each side across from each other, which had had families living in them for at least two generations. The women of the homes were from my mother’s generation. Nearly every day after school I could bet that my mother and the three other women would be outside on the sidewalk in front of one of our homes and gossiping about life and their daily events, or more interestingly, our odd neighbors.

We lived on one of the windiest streets in the city, meaning that on windy nights it would feel as if we were standing in a wind tunnel. On stormy nights the gutters would overflow with rain water and cover the edges of our sidewalks, making sure that the next night we’d see families of raccoons trying to find their way back home after being flooded out of the sewer passages.

Growing up in South City I didn’t realize just how cold and windy it was. I didn’t notice the chill in the air or the grayness of our sky until I started to venture outside of the city limits. I had often visited Millbrae with my mom, but one day I accompanied my boyfriend to a family event in San Mateo. It was a beautiful sunny day with only a slight breeze that held not even a hint of a chill. We had spent most of our day outdoors on their trampoline or eating barbeque on their patio. On the way home I wore my tank top, with my every day hoodie sweatshirt in my lap. As we neared SFO I could feel a chill coming in from the vents of the car, and it looked as if we were about to drive into a wall of gray. I looked behind us, at the freeway we had just driven and the city we were leaving behind, only to see bright blue skies and a beautiful sun.

Cities further south of us may have had nicer weather, but we had our perks as well. Depending on the time of day, one can still drive down Spruce Avenue and smell fresh baked bread emitting from the Oroweat factory or the thick scent of sweet chocolate floating around the See’s Candy factory. Take a drive down to Oyster Point and enjoy the sound of the bay hitting the rocks while you fish, or find some of the more secluded areas where there is sand at the waters edge, and enjoy a splash in the (although dirty and freezing cold) water with friends or dogs!

Another thing that didn’t ever faze me as unusual in South City was the airplanes. When individual neighborhoods had their windows replaced by the city due to excessive rattling caused by the low flying airplanes, it made perfect sense to me. However, on September 12, 2001, I went to see my boyfriend on his lunch hour. He was sitting outside of his work on El Camino Real and mentioned that it was the first time in nearly two years that he’d sat there and not seen one airplane go by. We sat there together, and it was eerily silent as we looked at the clear blue sky with no cloud, let alone airplane, in sight.

South City has changed plenty over the years in many ways, but I assume that all cities do. In the years that my great-grandparents lived in the city it was predominately occupied by Italians and immigrant families trying to start new lives with young children. In the years that my grandparents lived there, it was post WWII and being Italian wasn’t always something you wanted to point out, as we are all Americans. By the time my mother was growing up, South San Francisco was full of hippies or boys being ready to ship off to Vietnam. My generation got to enjoy most of our families knowing each other, and having safe streets to walk. Now, however, it saddens my heart to say that South City barely resembles the city my great-grandparents knew so well. East Side South City is dealing with high amounts of gang activity, multiple shootings, and one year alone saw five murders. West Side South City has nearly disowned its Eastern half and denies ever having knowledge that the city was so “bad”.

In December of 2010 I drove down the street where my family had bought all that land so many years ago, the street where I grew up, where I had my first scraped knee, where I experienced the 1989 earthquake, and where I laid eyes on my husband for the first time… and I felt like a stranger. I felt as though I belonged there about as much as someone from out of state, and that I had no claim to the area. The deli my family had owned bore neon liquor signs and a metal grate over the window where they stored their alcohol, the hardware store having been turned into a laundromat. Even more sad still was when I drove past 8th lane only to see a mass amount of Saint candles burning brightly by a telephone pole in the alley way – a memorial to three young men who were gunned down in their own neighborhood for who knows what, maybe for simply living in the wrong area.

It’s amazing how somewhere that people have such fond memories can turn into such a cold and unfamiliar place. When I drive into South City now a day, the gray clouds and cold weather seem fitting. All of my family has passed away and therefore none of us reside there. I recently sold the last of the property that my great-grandparents bought some 90 years ago. The school system has deteriorated into something I can’t imagine sending my own children to, and I feel less than safe sitting in the parking lot of my families old deli. All I can do now is hope that in the next 100 years, if not sooner, South San Francisco will change just as drastically, but for the better.

3 comments for “Memories from a South City native”