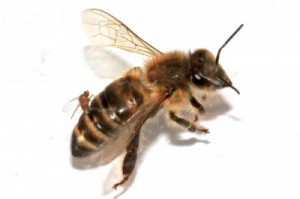 The apocephalus borealis fly attaches to the honey bee rendering them into a zombee state whereby they abandon their hives at night, and die.

Living in the shadows of Colma we often hear stories of Zombee’s and offer a chuckle or two. But now there is a real concern that Zombies’ do in-deed exist and maybe closer to us than the graveyards. A relatively new phenomenon has been discovered that involves our local honeybees and turns them into zombee’s causing them to abandon their hives and wander toward the lights at night at which time they die.

For many years now scientists have been working to solve the mystery of the demise of honeybee colonies across North America. ‘Colony Collapse Disorder’ or CCD has been attributed to multiple factors including pesticides, pathogens; such as fungus and viruses, as well as parasites which may have caused the zombie like behavior. The current studies of the parasite Apocephalus borealis fly reflects the latest concern in California and possibly in South Dakota and local studies will help determine the scope of the problem.  It was previously documented that these flies have had an impact on bumblebees and paper wasps throughout North America and with closer scrutiny we will see what affect they have on our local honeybees.

The Apocephalus borealis is a very small female fly that parasitizes (attaches to) honey bees abdomens and inserts its eggs into the bee’s abdomen. As the larvae develop, they attack the bee’s brains and the bees become disoriented. Most bee hives will settle down around 5:00pm or 6:00pm however once these bees are infected by the ‘Zombie Fly’ they leave their hives at night  and display unusual behavior  such as being attracted to light and in time they will die. After about seven days the mature larvae emerge from the area between the bees head and the thorax, killing off the bees, which reduces the bee population while increasing the fly population.

To date the presence of fly larvae in up to 18% of active foragers makes this a likely contributor to the honey bee hives decline. Scientists are also using tiny RFID tags on some of the bees to determine when they leave their hives and when they return which will also help in learning more of their strange behavior.

Pesticides are also considered a factor

Pesticides by their very nature are created to kill off insects by physically, chemically or biologically interfering with their metabolism or normal behavior.  While most pesticides are a mixture of synthetically created chemicals, some are also ‘natural’ such as pyrethrum (Chrysanthemum), garlic, tea-tree oil and eucalyptus oil and can be problematic for many. The use of synthetic pesticides in the US began in the 1930s and today farmers in America spend approximately $4.1 billion on pesticides of a major role in natural science and many of the changes studied in the past 50 years.  However the recent move by the Environment Protection Agency to reject the suspension of registration for the pesticide clothianidin stating it does not pose an “imminent hazard” was very disappointing to beekeepers and environmentalists that had filed the petition earlier this year.  There have been many questions regarding the proper testing and studies on this pesticide that is manufactured by BAYER and we know this discussion will come back into the main news media in the near future. Many chemicals such as DDT and Dursban were outlawed by the EPA (1997 and 2000 respectably) and are still manufactured here in the United States to be exported to other countries. These contaminants do not know man made boundaries and can be traced in our air, water and imported products, such as the food we eat.

The recent move by the Environment Protection Agency to reject the suspension of registration for the highly suspected pesticide clothianidin stating it does not pose an “imminent hazard” was very disappointing to beekeepers and environmentalists that had filed the petition earlier this year.  There have been many questions regarding the proper testing and studies on this pesticide that is manufactured by BAYER and we know this discussion will come back into the main news media in the near future.

Why we should care about the health of the honey bees

The honey bee arrived on the San Francisco Peninsula shortly after the California Gold Rush began in 1849 and is the only known insect that produces food eaten by humans, honey.  Bees are also responsible for the pollination of 70% of our flowering plants and provide tens of billions of dollars to our state’s economy including ‘the indirect value of honey bee pollination (meat, dairy products, vegetables, hay, etc.), honey bees are responsible for nearly half of California’s agricultural production (cash receipts for farm marketing), which is currently valued above $32.0 billion. ” (Source: UC-Davis) These busy little bees also help produce the food for wild animals.

Beekeepers have reported an average decline in hive population by 30% each year since 2006, and 2007 was reported to be the lowest hive population in 23 years. However the past few years have witnessed resurgence; some beekeepers contribute that factor to knowing how to protect hives and by splitting hives to create more. It is a delicate balance that is being played out and beekeepers and scientists are keenly observing the changes.

Since the honey bee accounts for approximately one-third of our food production, finding ways to preserve them and reduce Colony Collapse Disorder is more important that what the average person would consider.  It is amazing to think that these small little creatures are responsible for so much of our food supply.

What you can do to help with Zombees

Be aware of the flying insects in your area and look to see if you have an increase of bees flying around in the evening or heading to your porch light. These could be signs that Zombees are in your midst and your help with the local study is highly encouraged.  Carefully collecting any bees you may find in the morning under your porch light or street light can be beneficial. (No matter if a bee is alive or dead, it is always best to use tweezers or a forceps tool to pick them up rather than bare hands.)  The Zoobee website also suggests putting honeybees you collect into a container and observe them periodically. ‘Infected honey bees give rise to brown pill-like fly pupae in about a week and to adult flies a few weeks later.’

To find more information on joining this study go to the website at: https://www.zombeewatch.org or write to them at:

If you are interested in beekeeping we have a local Beekeepers Guild that meets the first Thursday of the month at the Congregational Church of Belmont, 751 Alameda de las Pulgas, Belmont. An informal discussion group for Beginner’s Corner and Bee Naturals starts at 7PM and at 7:30pm the formal meeting begins. More information contact 650-593-4547 or www.sanmateobee.org/

You have me convenced. Because a bee kepeer will usually take free bees. Canvas coveralls,ruber boots, heavy leather gloves, and screen wire head and face cover. Get some wasp and bee killer. Comes in a can,shoots 30 foot. Go out at night. Aim with a pen light flash light and spray them. Have a sprinkler going in your yard to stand under and wash them of if they atack. Turn of the pen light if they do. Bees will atack at night. It is just they return to the hive in short order. See if you can rent a good bee suit some were. Wish I was in the area. I would help you. I got stung over 500 times once. My back itched for 10 min.