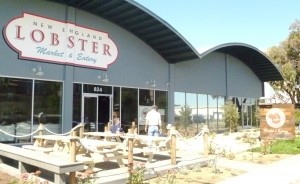 After twenty five years in South San Francisco, New England Lobster will be moving back to its original home of Burlingame, but bigger and better.  New England Lobster Market and Eatery is slated to open by October for a full service restaurant with their retail shop having opened September 13th.  Wholesale distribution will also be moving to the Burlingame location; however the Food Trailer we’ve come to enjoy will continue to feed us lunch daily Tuesday through Saturday at 170 Mitchell Avenue in South City for some time to come.

The new General Manager, Andy Howse, invited me for a behind the scenes tour of the facility located at 824 Cowan Road in Burlingame, which is a stone’s throw from the Bay Trail on Bayshore Boulevard, a block south of the Westin Hotel.  The restaurant features outdoor seating for 30 people and indoor dining for 40 more. In addition a beautifully designed room off the dining area will host many private functions and offers local businesses new choices for meetings.

The menu has been extended to include seafood platters, salads, and desserts as well as the much loved sandwiches and rolls. A kids menu has been created allowing this fun place to accommodate families as well. (See menu below)  Attention to detail is evident throughout with the theme of east coast cape cod beach life, forcing you to slow down and unwind a bit.

Marc Worrall, the owner and creator, joined us to share a bit of history. “The boat up there is from the oldest fishing port in the United States,” he said as he pointed towards the high ceiling in the dining area, “We had it trucked over from Gloucester, Massachusetts. We really want to give an authentic feel of a fishing community. The lighthouse next to the boat is from Nova Scotia.”  New England Lobsters depend on the waters of Maine and Canada to provide them with over 8,000 pounds of lobster that are flown over night a few times a week. “The lobsters you see today were in the Atlantic Ocean a day ago. They are prepared and packaged in such a way they remain alive and healthy when they reach us.” 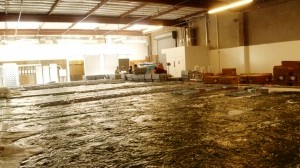 Most impressive was the 50,000 gallon water tank that holds up to 70,000 pounds of lobsters and the delicate filtration system that maintains a 45* temperature as employees monitor the PH balance and specific bacteria. “Crustaceans don’t have lungs,” explains Howse, “they breathe through their ‘skin’ or shells. After they are caught in traps, they are packaged with paper that has been drenched in salt water and encompassed in iced gel packs, boxed and flown to San Francisco International Airport.” 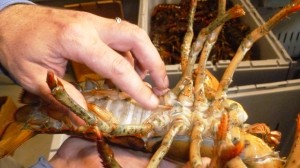 Primo shows the female lobsters will at times have eggs, which is considered a delicacy and referred to as ‘Roe’ or lobster caviar

Primo, one of the employees explained how the lobsters were identified, graded, weighed and separated for distribution.  “Sometimes the females will have eggs, and this is considered a delicacy called ‘roe’ or ‘lobster caviar” he explained while showing me the underbelly of a lobster. “You will find the eggs here, under the tail section of a female lobster. “

There was also a smaller tank to house live crabs when the season opens. “My background is more in the fishing industry, a fish monger of sorts,” Howse laughs, “But actually NOAA (National Oceanic and Atmospheric Administration) pretty much dictates when the seasons open for us, as well as for the whole of the fishing industry.”  Howse’s background has made him quite the expert on the safe handling and transport of seafood which is governed by the Association of Food and Drug Officials. “The rules and regulations are very strict, which is important. No one wants to buy or sell seafood that hasn’t been properly stored.” 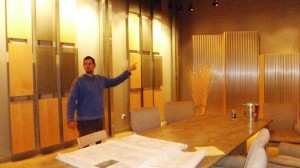 The office and warehouse space with new state of the art walk in freezers are a setup from their old digs on Mitchell Avenue in South City.  This will allow more efficient production for their distribution as well as their retail products and now their restaurant.  With a current number of 25 employees, they look to hire on more help as the business continues to grow.  You would think a facility in the midst of such a huge transition would show a bit of chaos or frenzy yet everyone seemed focused on doing their job with a relaxed smile and a bit of excitement for opening day.  This attitude reflects the style of the owner Worrall who has had this dream for awhile. “Each time I visit the east coast, I gain more ideas and the timing seemed right.”  Worrall said in his calm laid back manner. “We really look forward to expanding our business with this restaurant. This is just another step to satisfy our customers.”

In addition to lobsters, live and cooked, the retail store sells shrimp, clams, mussels, and scallops and will end ship to your family and friends for a very reasonable charge. You can order online or stop by during these hours:  Monday – Thursday: 6am-2pm, Friday: 6am-4pm and Saturday: 6am-4pm.  To contact them: Tel: 650-873-9000 Fax: 650-873-9002    http://newenglandlobster.net

The Lunch Trailer serves up Lobster Rolls, Crab Rolls, and Lobster Corn Chowder Tuesdays through Saturdays 11am-3pm and will continue at the 170 Mitchell Avenue SSF location for the time being. 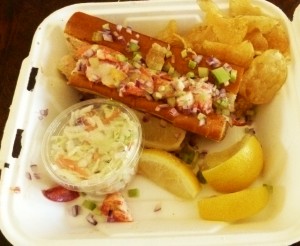 Lobster Rolls are among the favorites at NE Lobster

[…] send it to Tanzania, Africa, where they will be put to very good use. Worrall, whose family owns New England Lobster, came across the empty container – 10 feet wide, 20 feet long and 8 feet high – when the […]