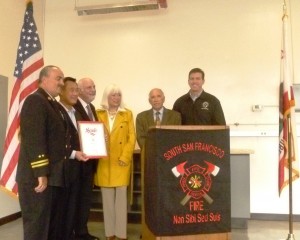 When so many other cities are closing Fire Stations, the City of South San Francisco was proud to show off the new renovations at Fire Station 63, which is located on Arroyo Drive adjacent to the South San Francisco Police Department and Municipal Services Building, on Tuesday November 20th.  This location has been home to the emergency departments since the 1980’s after the closing of the large discount store, The Value Giant. Previously this station had been located on the frontage road of El Camino Real, up from Joann’s Restaurant.

The nickname for this facility, the ‘Bunker’ was well deserved given the low ceilings of this station and the renovations were sorely needed to retrofit this facility to today’s earthquake standards, while increasing room in the apparatus bay to house the rescue and fire engines.  The living quarters also saw some upgrades during this remodel.  South San Francisco has five stations with this station 63 among the busiest answering over 2400 rescue calls a year and the response time from this station is three to four minutes.

“This was a long time coming” Battalion Chief Chris Campagna said as he spoke to the standing room only group Tuesday morning. “We look forward to putting this station back in service.”  The crowd was then invited to tour the renovated facility.

The monies for this project were realized through a hard earned grant awarded by FEMA in December 2009, as over 7500 cities applied and only 100 were given this opportunity to receive aid from the American Recovery and Reinvestment Act Assistance to Firefighters Station Construction Program (ARRA).  Construction was started in November 2011 and by mid December fire personnel  will be moving back in. 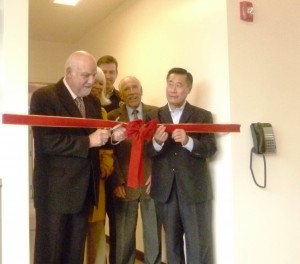 SSF Mayor Rich Garbarino, along with other councilmembers and CA Senator Yee during the Ribbon Cutting Ceremony

Senator Leland Yee was on hand to present Certification of Recognition from the California State Senate and to assist in the ribbon cutting along with Mayor Garbarino, Vice Mayor Gonzalez, Councilmember Matsumoto and Council Member/California State Assemblyman Elect Kevin Mullin.   Fire Marshall Luis Da Silva, one of the project manages, graciously gave kudos to all involved in making this vision become a reality with special acknowledgement to Terry White and the Department of Public Works, Doug Hollis and the IT Department, fellow project manager Robert Hahn of Engineering, and to Fire Administration.

Fire Chief Philip White has been very progressive to ensure the protection of the city where population nearly doubles during the work day.  Chief White has seen the creation of the Training Towers, EOC, SSF Fire Boat, and the buildup of the citizen voluntary emergency response team, CERT, among other accomplishments. South San Francisco Fire was recently credited for their part in hosting the Red Command, the Fire Branch of the Urban Shield, a Bay Area multi-agency annual drill that covered twelve real life scenarios with over 500 individuals participating. 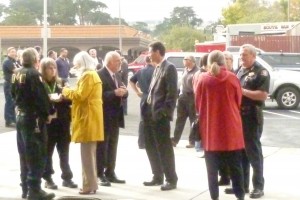 Very good job ESC! Your website will be a success.