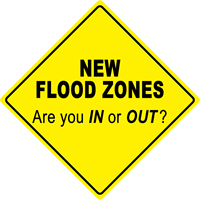 FEMA has issued new flood maps – do they impact you?

Many homeowners have received recent notification from FEMA (Federal Emergency Management Administration) stating they are now living in an area that may be a risk for flooding.  The notice alerts homeowners to the fact they must now purchase flood insurance and their mortgage lender is now required to have proof of this landholders flood insurance.

FEMA released the current updated flood hazard map on October 16, 2012, which is known as FIRM, Flood Insurance Rate Map with one of the areas shown on the FIRM called a SFHA, Special Flood Hazard Area.  The USGS (United State Geological Survey) explains ‘The US  decided to use the 1-percent annual exceedance probability (AEP) flood as the basis for the National Flood Insurance Program. The 1-percent AEP flood was thought to be a fair balance between protecting the public and overly stringent regulation. Because the 1-percent AEP flood has a 1 in 100 chance of being equaled or exceeded in any 1 year, and it has an average recurrence interval of 100 years, it often is referred to as the 100 year flood.’ The flood hazard and risk information presented on the FIRMs is the result of engineering studies that are performed by engineering companies, other Federal agencies, or communities, which are reviewed for compliance with FEMA guidelines and approved by FEMA.

Many residents have questioned this new mapping and their requirement to now pay for flood insurance. FEMA has 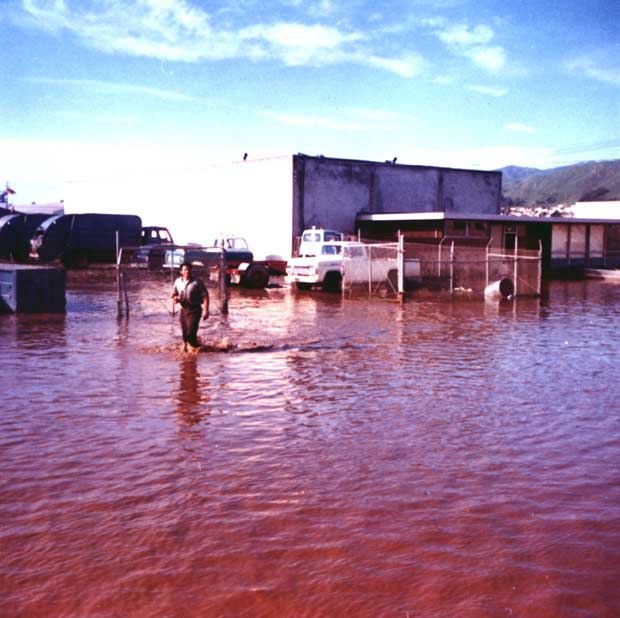 acknowledged that there may be some land parcels that are above the BFE, Base Flood Elevation and have set about a process to address this concern.  FEMA states “Because of the limited extent of the elevated area and the limitations of the map scale, it may not have been possible for FEMA to show this area as being outside the SFHA and so these areas have been incorrectly included in the SFHA on the FIRM.”

To engage in this process, known as Letter of Map Amendment, or LOMA and Letter of Map Revision Based on Fill, or LOMR-F, a person who owns or rents property may submit mapping and survey information to FEMA requesting that they issue documentation removing the property or structure from the Special Flood Hazard Area (SFHA).  The applicant most probably will need to hire a Licensed Land Surveyor or Registered Professional Engineer to prepare an Elevation Certificate for the property. After FEMA receives all the information necessary it will review the request and generally make a determination in 4-6 weeks.

Flood hazard mapping became a major project of FEMA in response to assisting communities with building plans and to help the insurance industry better predict potential areas of concern and how to rate premiums for those in high risk areas. This also helps individuals who want to avoid moving into an area that is at risk of flooding.

FEMA steps in with financial aid when major flooding occurs across the United States and works to control costs as well as provide guidelines and requirements for the safety of those living in flood prone areas. As we witness storms and levee breaks in other parts of the country this is a reminder to remember our area is also prone to flooding.  Much of the central valley is below sea level and much of the water is controlled via levees that are still being identified throughout the region. Those of us that live on the peninsula also have areas that are below sea level in addition to close proximity of major creeks such as the Colma Creek, San Bruno Creek and the San Francisquito Creek which see regular flooding. San Mateo County Public Works is the designated agency for local concerns. (see side note)

Mark Nagales, aide to Senator Jackie Speier, has said the Senator’s office has received many calls on this new requirement and they are working to find answers and ways to help those that have received letters stating they are in a flood hazard location and required to purchase additional insurance. For more information contact Senator Jackie Speier’s office at (650) 342-0300 or FEMA Map Information exchange at 1-877-FEMA MAP (1-877-336-2627). 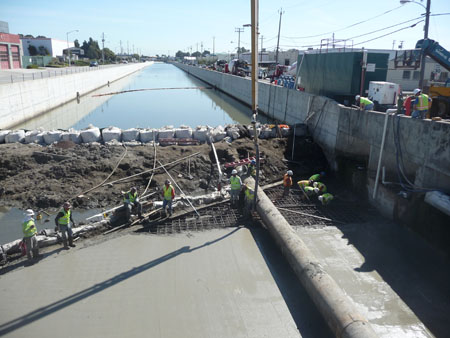 Colma Creek
The Colma Creek Flood Control Zone was created in 1964 to construct flood control facilities in Colma Creek to alleviate flooding in the City of South San Francisco. Originally the project extended from Mission Road in South San Francisco approximately three miles to San Francisco Bay. Several channel improvements were constructed and four bridges replaced before Proposition 13 curtailed the project’s funding source (property taxes) in 1978. The plan to improve the Colma Creek Flood Control Channel was re-vitalized in the mid 1990’s by the financing of improvements by the BART Airport Extension Project and a financial contribution from the State Department of Transportation (CALTRANS) for drainage improvements in El Camino Real in Colma and Daly City. The scope of the project was extended upstream from Mission Road to the vicinity of “A” Street in Daly City.

The BART and CalTrans projects were combined with bond financing in the amount of $15.7 million to provide funding for additional flood control facilities within the expanded project limits. Culvert improvements have been made in Old Mission Road and El Camino Real and the South Airport Boulevard Bridge has been replaced.  A collaborative project with the Peninsula Joint Powers Board to replace the Mainline Railroad Bridge over Colma Creek was completed in 2004.  A project that includes channel improvements from Spruce Avenue to San Mateo Avenue and the raising of the San Mateo Avenue Bridge is near completion.  The Colma Creek Food Control Zone has issued additional bonds to finance and complete the remainder of the planned projects.

Construction between Spruce and San Mateo Avenues on Colma Creek resulted in the filling of half an acre of salt marsh wetlands within the original earthen channel of Colma creek. Federal and State permits for the current construction require that the District mitigate for these lost wetlands. Therefore the District is constructing 1.5 acres of salt marsh wetlands and 2.0 acres of “native” upland habitat. This project, known as the Colma Creek Flood Control Habitat Mitigation Project, is located along the mouth of Colma Creek where it enters San Francisco Bay, below Utah Avenue. When complete, this habitat is expected to be used by the endangered California Clapper Rail, which has been observed in the area.

San Bruno Creek
The San Bruno Creek Flood Control Zone was established in 1967 to finance the construction of channel and culvert improvements in the lower reach of San Bruno Creek.  The Zone also contributed to the financing of drainage improvements in the City of San Bruno below El Camino Real.  The Zone finances the maintenance of the channels and contracts with the City of San Bruno for pump station maintenance.  The Zone recently removed accumulated silt and vegetation from the open channel area known as “Cupid Row” located between the CalTrain tracks and U.S. 101. Complex Federal and State permits are required to maintain this channel as the area is habitat for the California Red Legged Frog and the San Francisco Garter Snake, both listed as Federal Endangered Species.

I live in San Mateo County at 506 Upton St, Redwood City which is not in the city limits. I live next to a creek that carries water from Emerald Lake to the bay. We have always been told that this is a flood control creek. My reason for writing to you is that my neighbor has built things in the creek that will affect the flow of the creek and probably cause flooding. I strongly believe that if nothing is done to remove these items from the creek and there is even a normal rainy season, let alone an El Niño, there will be flooding.
Thank you and I look forward to your response,
Mark

Hi Mark,
It sounds like you best course of action would be to contact San Mateo County Dept of Public Works. If they cannot help you directly, they will have the resources available to refer you to and have this checked out further. The SMC DPW contact would be as below.
Wishing you good luck during this El Nino season.
-Ed
Administrative/Main Office
Phone: (650) 363-4100 Fax: (650) 361-8220
Location