Everything South City is an online community group where people share what’s up in South City in real time. This is a recap of some of the recent posts.  Join in on the conversation at www.EverythingSouthCity.com or find us on Facebook . 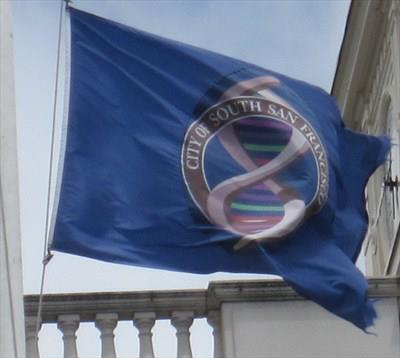 South San Francisco adopted our own flag in September 2004

*ESC held a GAME ON to see who knew who was our Mayor and many answers came in with Jose Martinez being the first to identify Mayor Pedro Gonzalez. Other great guesses included our former Mayor Rich Garbarino. Reorganization of our City Council has taken place for the year 2013. Most creative answer was from Estevan Huerta ‘We should elect Angel Pagan since he will be staying in SF for four more years!!’

*That post brought up a good question by Angela Cordero “I’ve been gone from SSF for awhile now…when did she get her own flag??” There were many good guesses with Greg Mediati giving 2004 as his answer. This date was confirmed by our City Clerk Krista Martinelli with a copy of the resolution being signed by our then council in September 2004.

* HEY FUNDRAISERS – Heads up; Many business set their budgets by January so be sure to look at your calendars to note when your events might be held. Then contact those in our community that you might ask to consider your needs so they can hopefully help your group at that time. Many last minute needs cannot be accommodated so be prepared. Also be sure to support all those businesses that give to your groups and get your groups to do likewise! SUPPORT LOCAL BUSINESSES!

* ESC would like to congratulate Kevin Mullin  today as he was sworn in to the California State Assembly and has been appointed Assistant Speaker Pro Tempore. He will be on the leadership team of Speaker John Perez and representing District 22 in San Mateo County.  Keep up the good work Kevin! 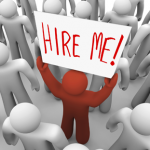 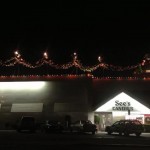 Home for the holidays.
Photo courtesy of Angela De Benedetto.

*We always have excitement over the holiday decorations and Angela De Benedetto Picture of See’s Candies at night did not disappoint and over 300 people agreed!

*Recent coyote sightings have been made by Friends of Sign Hill and folks from ESC also weighed in:  April Chorba shares another coyote sighting on Sign Hill, along with a recent one off of Hillside and another on El Camino Real. Owners of small pets should be advised. 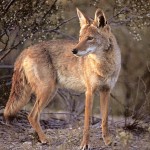 Coyotes are wild animals and should be treated as such. Enjoy them from a distance and do not feed them.

‘Watch out if you plan to go hiking on the sign. Coyote spotted and have heard several them howling at night. Sounds so eerrie. Sayra Lainez, Renee Chan and Deseio Gutierrez like this.

Karen Davenport We live in Daly City. and my sister-in-law encountered one in the field of the elementary school across from her home, while walking her dog. It just stared at her, but did nothing. We hear them over at the Olympic Club almost every night.

Renee Gomes My friend told me that they were also seen at the dog park.

Bonnie Tognetti We had foxes when we lived outside Washington DC and we have coyotes here in the Santa Cruz Mts. If either is seen in the daytime Beware of rabies–these guys are night hunters and come out at dusk to hunt. Also they will kill cats and small dogs so don’t let your pets out alone especially at night. Just a couple of warnings from a former So. City kid.

Ian Brown I had one that regularly visited our backyard for about a month. Haven’t seen it since it started raining though. (We’re just south of Goldilocks in SB)

Everything South City We just had another ESC friend Sarah Minsky share:
‘Saw a coyote in Orange park. Be careful all, but remember…they are more afraid of us than we are of them!!’

*Early December rains brought concern over flooding with this report coming in:

Jacqueline Laínez shares: “Significant flooding on bayshore & sister city almost in front of Brazilian cafe. Looks like 2 or 3 inches of water across 2 southbound lanes on bayshore. Be very careful & slow down folks.”

*The weather storms caused ESC to share this information with our friends: 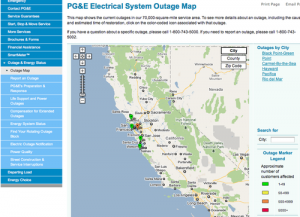 This is an example of what the PGE Electrical Outage Map would look like.

Heavy winds are causing power outages in the southern peninsula. Here is a good resource -PG&E Electrical System Outage Map to bookmark.
If you have a question about a specific outage, or if you need to report an outage, please call 1-800-743-5002.

*A lot of reminiscing when Wendy Sinclair-Smith asked:
“Speaking of super weather, does anyone remember the South City flood of 1972 (?) when it flooded so bad you had to use a row boat to get across town? There was a record high tide and a record rain fall and the creek backed up. Does anyone remember or have pictures?”

Ellen Minucciani Don’t have pictures, but remember it was garbage day and Circle Court flooded and there was garbage all over the place.

Angelique Presidente Nope, I wasn’t even a twinkle but I remember when we got snow, my 14 yr old was real little

Stanley Williams Did they scream global warming then?

Ana R. Garcia-Alvarado Wonder if the 30 yr. anniversary is the reason many if us are getting Flood Ins. Notices from our Lenders… Had 3 calls on it today and 2 yesterday.. I’ll find out tomorrow from FEMA and let you all know.

Marcie Mitchell I stayed home from school and my dad and others in the ‘hood helped shovel out the neighbors houses – we’re on Dellbrook and the ditch behind our houses filled with mud from a broken reservoir on SB Mtn. We have pics but I’d have to dig them out.

Michael Jaurigui The only thing i recognize there is the mountain

Mark Nagales Congresswoman Speier’s office also received several calls from residents about the flood insurance notices. We are talking to FEMA and should know by Friday.

Everything South City Ana R. Garcia-Alvarado FEMA came out with new flood maps a while back which is causing insurance companies to re-evalue areas.

Joyce Messing I remember the kids thought it was so much fun! it was a warm storm and the whole neighborhood was down at the corner of spruce and mayfair wading around in 2 ft or more of water, the canal complete ly over flowed. 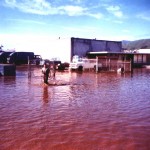 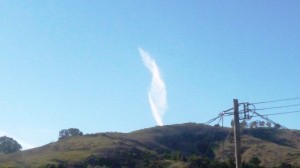 *Over 50 of our ESC friends liked and commented on an unusual cloud formation seen from  the north side of Sign Hill. Many agreed it looked like the DNA Helix or the Eternal Flame Sculpture at Orange Memorial Park.

*We also had excitement over our beloved 49ers and enjoying photos of our Sign Hill dressed in Red!

As published in the Peninsula Progress (Dec 5-29th edition)