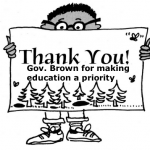 Increase in educational funding is needed

Today California’s Governor Brown published the 2013-2014 Budget and the summary can be viewed here FULL BUDGET SUMMARY.  The budget shows an increase in monies allocated to our educational system which has been sorely needed. Here is a general breakdown provided by the Associated Press.

How the money is spent:

$145 billion total budget, which includes $40.9 billion in special funds dedicated to a particular purpose and $7.2 billion in bond funding.

$56.2 billion for K-12 schools and community colleges, $2.7 billion more than in the current fiscal year.

$11.1 billion for higher education, a 13.6 percent increase. It includes $250 million more for each the UC and CSU systems.

$28.3 billion for Health and Human Services.

$2.5 billion for natural resources and environmental protection, about the same as the current year.

$645 million for housing, and business and consumer services, a nearly 200 percent increase.

$207 million for transportation, a 13 percent increase.

Where the money comes from: