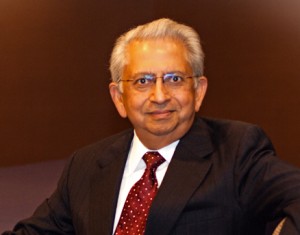 Thirteen people applied for a newly vacated seat on the five-member South San Francisco City Council, and city Planning Commissioner Pradeep Gupta was picked by the board members after an interview process.

The seat opened up when Councilman Kevin Mullin was elected in November to the California state Assembly.

Gupta will serve until November 2013, when a special election will be held for the remaining two years of Mullin’s unexpired term.

The council in a special meeting decided that, instead of leaving the seat vacant for 11 months or naming a person to the council for the three-year term, it would make the one-year appointment.

Gupta, who had to resign from the planning commission, where he served for three years, including one year as chairman, told India-West that he expects to run for reelection in November.

He said he expects at least one and as many as three four-year board posts to open up in November, so he will have an option of running for the two years remaining on Mullin’s term or for one of the other four-year seats.

Gupta, who was sworn in Dec. 31, retired as an electrical engineer about 10 years ago. He has more than 30 years of experience in the electric power industry, including 11 years at Electric Power Research Institute, eight years at Southern California Edison Co. and 10 years as a consultant on international utilities.

The Indian American former planning commission member has a B.S.E.E. from IIT-Madras (“I was in the pioneering batch of 1964”) and master’s and Ph.D. degrees in electrical engineering from Purdue University.

Asked by India-West why he won over the other 12 candidates, including many with powerful political backers, Gupta, who grew up in New Delhi, said that he believes his engineering background and experience played a role. As far as he knows, he said, he is the “first engineer to serve on a council in San Mateo County.”

I can’t get into their heads,” he said of the council members, “but I think they (also liked) my experience in the planning commission. The hearings were video recorded and televised. Council members could look at these hearings and see me in action. I think they were impressed at how I handled situations in a calm and analytical manner.”

One key issue he will have to address on the council, he said, is a loss of state funding due to Gov. Jerry Brown’s decision to discontinue downtown redevelopment agency programs in California.

“Cities have to pay back a number of dues to the state. In South San Francisco that means a reduction of cash flows. The economic slowdown is an immediate problem. We want to keep (essential) city services,” he said.

Reducing crime and policing gang activities are other major issues. “We want to make the downtown walking-friendly, with small-scale retail stores,” the Indian American council member said. “We want a downtown that is really dynamic.”