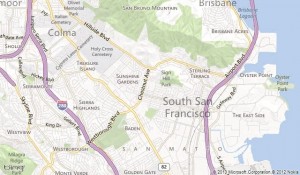 Jerry Hull, a former South Citian, found our Facebook page and the following conversation took place.  It’s great to see that we really are still a small city after all.
I grew up in West Winston Manner. I went to Sierra Vista Elementary School. I lived on Mansfield Dr. I loved my childhood memories, playing baseball on the Seals, Pal Captains, the Giants, Buri Buri Food & Liquor, LOL but we just called ourselves Buri Buri. I played from peewee, midgets & Ponies league while my Uncle Greg coached. Loved tailgating to Candlestick Park. I loved playing in the hills behind Dundee & Clay Park. We built forts, played war & just goofed off. It was truly my best childhood years. I lived on Railroad & Spruce too. We used to watch the drive inn all the time. Too bad I don’t know or talk to anyone from my childhood since I moved & then joined the Marine Corps. I miss you South City. Skateboarding down Longford, sliding down the letters on cardboard sleds, man I could go on. I am glad I found this page.

Karen Johanson Jerry, in addition to Everything South City, you might want to check out the “You knew you grew up in South San Francisco when. . .” and “South San Francisco – My Hometown” pages. . .lots of great memories are shared.

Sharon Albera Jerry, is your Mom Cindy? I think I remember you. You were a little older than my kids.

Cindy Artau Holmes HI Sharon, This is Cindy (artau) I am trying to remember you refresh my memory lol sent you a friends request

Ronald Fuentes My best friend growing up Andy Andy Fresquez was on Railroad and Spruce, his brothers Bobby and Manuel too. Great years and a forgotten era to some. The drive in was cool as was most of south city. The state theatre was open and during the summer we went for double features for about 50 cents. We could go to the pharmacy and read comic books and get real cherry coke or malts. Great years and a time I wish our kids could live today then the crazy world we have today. Thank you for serving our country in the marines.

Pete Rios Jerry, I am from South City myself. I too served in the Marine Corps. I lived on Larch Ave between Irving and Highland and also on Miller Ave between Spruce and Magnolia. Semper Fi!

Vorisia Henderson Davis Love it Jerry- good memories- I grew up on Longford and remember kicking the ball over the fence at lunch so we could ‘explore’ the canyon behind the school to retrieve the ball! Amazing how often that ball went over the fence and the beauty & magic that was in that canyon (now condos

Pete Rios I went to Hillside Elementary School. I remember going to the liquor shop on Hillside and North Spruce across from Paradise Valley Park. I used to climb Sign Hill and slide down the letters on cardboard all the time. I remember seeing E.T. at the Spruce Drive-In.

A.C. Ruzcita thanks for reliving those memories on this page! Very cool!

Tim Dinsmore South City and Your Friends are never far away Jerry! One thing about South City and the surrounding areas… we really are a Family Community that cares about the ones we grew up with! Welcome back Brother!

Jerry Hull Sharon Albera, Yes my mom is Cindy. Here’s here profile Cindy Artau Holmes. I recognize some names on here. OMG, I never thought I’d get a response like this. This is why I miss South City. Love you guys.

Cindy Artau Holmes YES MANY GREAT MEMORIES AND I AM STILL IN TOUCH WITH A LOT OF CLASS MATES LOVE SO. CITY

Sharon Albera I grew up on Buxton. Our house was the one that gave out the comic books on Halloween. Then my husband and I bought a house on Mansfield. Two doors down from Rosa and Larry. We have twin girls. I went to school with your brother Greg.