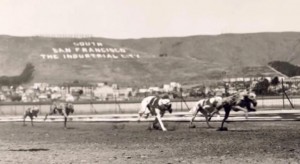 A little throw back here, from our local historian Rhod with his research:

The Baden Kennel Club (a greyhound racing track) opened in 1933. It helped many families who had lost work in the factories, but also brought controversy. Some residents were very concerned about the betting and criminal element associated with race tracks.

Competition and conflict also developed between the Kennel Club and the Tanforan and Bay Meadows horse racing tracks. There were several raids here by Daly City Constable Landini. In 1937, the state outlawed greyhound racing (mainly the result of the horse racing lobby), closing Baden Kennel Club.

My Grandfather, John J. Lane and his brother, Grover lived in San Francisco and both owned Greyhounds. They raced them at the Baden Kennel Club between 1933 and 1937. Sometime during that time, a representative from the Greyhound Bus Company came to the track and started talking to my grandfather. He said the bus company was looking for a dog that he could draw to put a picture on the side of all their buses. He really like my grandfather’s dog and asked if he could draw him. My grandfather said yes! So the name of the dog that is pictured on the side of all the Greyhound buses is “Danny Boy”! My grandfather never received any compensation, but was very proud of the fact that his dog would live on forever on all the Greyhound Buses!