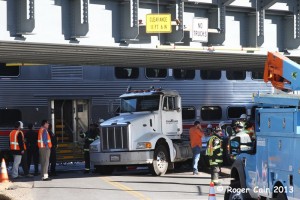 And the tractor sitting under the overpass, note the sign overhead that says “No Trucks”.

San Mateo County Sheriff’s office is investigating the accident that occurred at the San Bruno Caltrain station this afternoon. The big rig driver apparently did not see the “No Trucks” and “Clearance 11 feet 5 inches” signage until after he attempted to drive under the overpass.

Upon realizing there was not enough room for clearance to go forward, the driver saw he could not go in reverse either as there was a string of cars behind him. Being pinned in this location made his rig an easy target for the southbound Caltrain which struck the truck.

Fortunately there were no injuries reported and many see this as a good reminder for drivers to always leave space in front of your car at a crossing should you need to turn around in an emergency. 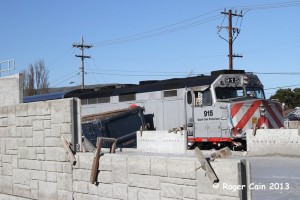 Our locally named locomotive (SSF 915) had an arm wrestling match with a tractor truck and trailer. It appears to be a draw, as neither one can move. As this is a southbound line this happened on, their routing the SB’s onto the northbound track temporarily to get around.