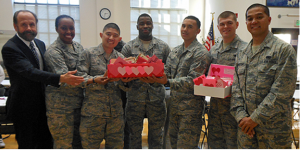 Four hundred handmade valentines created by South San Francisco seniors are on their way to members of the California Air National Guard 129th Rescue Wing who were recently deployed to Afghanistan and the Horn of Africa.

The seniors, staff members of South San Francisco Senior Services and volunteers made the valentines over several days. They put the finishing touches on their greeting cards on February 1 with Hill, other friends of the senior center and six members of the 129th Rescue Wing, who came to the senior center that day to receive the valentines and ensure their delivery to the deployed airmen.

About 165 members of 129th Rescue Wing were deployed in support of missions in Afghanistan and the Horn of Africa on January 25.

“I look forward to this event with South City seniors every year,” said Hill, D-San Mateo. “The prospect of brightening Valentine’s Day for troops who are overseas and far from their loved ones means a lot to everyone involved in this annual project.”

“We love being able to show our support and pride in the servicemen and women who are stationed abroad at this time of year,” said Laura Gigi, program coordinator at the Magnolia Center. “This project is fun and uplifting for all of us, and we’re delighted to be celebrating our fifth year of this activity with Jerry Hill.”

“When you’re down range or deployed, you often get attention at Christmas and Thanksgiving, but throughout the year there are holidays that you wish you could be back to celebrate,” Green said. “For people who may be homesick and away from their families and loved ones, having a valentines option is incredible. I know that the 165 people who are deployed will definitely appreciate it.“

South San Francisco School Board Trustee Judith Bush and Parks and Recreation Commissioner Richard Holt and his wife, Jeannette, also rolled up their sleeves to help with the crafts project.

Hill began the valentine crafts project with the South City seniors as a state assemblyman in 2009. The activity continued for each of his four years in the Assembly. This is his fifth year of participating in the seniors’ project; his first as a state senator.