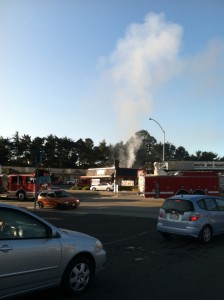 A fire was reported early this morning at Jack in the Box in the Winston Square at the corner of Hickey and El Camino Real.  Fire department responded and made quick work on the small blaze and no injuries were reported.  The restaurant re-opened a few hours later.

On our Facebook page we did have some fun speculation including Carol W’s post, “Ohhh no my teriyaki chicken bowl. Now I gotta drive all the way to Spruce. Did see caution tape on the doors though.” or Al’s “MY TACOS 0-0” , and Andrew’s “One of those people behaving badly drivers cutting through gets their revenge.”  Good to see them back in business so quickly, WTG!