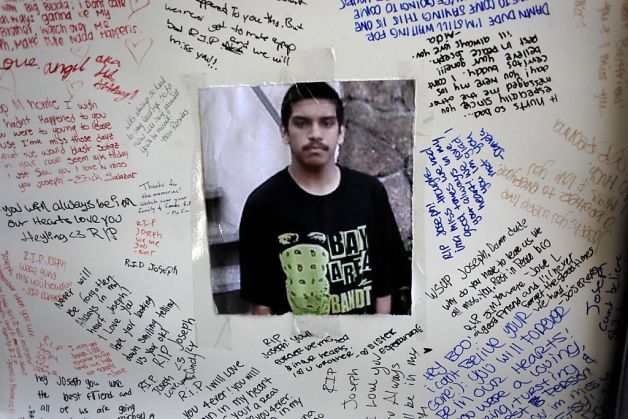 A poster to remember the 14-year-old at his South San Francisco, CA home, on Tueasday September 27, 2011, which was signed by family and friends during a memorial service over the weekend. Joseph Maharaj, was shot and killed near his home on September 18th.
Photo: Michael Macor, The Chronicle

The South San Francisco Police Department have updated the investigation on the murder of JOSEPH MAHARAJ which happened on Sunday Sept 18 2011 at 8:50pm on First Lane and there is now a $25,000.00 reward for the arrest and conviction of the person(s) responsible. We shared this information on our Facebook Page and many shared passionate posts which we will share here.
Everything South City continued: Whomever hit up that neighborhood is still out there – they took Maharaj’s life and injured Jesus Flores. Someone knows something and maybe with a financial incentive they will come forward. Do it because it is the right thing to do. Do it for the money. Just do it.
Iris Jara posted: Why hasn’t SSFPD updated the investigation on Ronald Figueroa which happened in March of 2010 ? My daughter is about to be 13 years old and is asking me why haven’t they caught the person who murdered her dad. Only because he had statutory rape because of a 2 year age difference on me when I conceived my daughter and cops look down on that without knowing the main reason as of why he was charged with that. SSFPD let Ronald Figueroa bleed to death and made him look like a rapist. Just to say that the main detective on his case finally questioned me, his daughter’s mom, on a fluke because he came across me through a different matter. I believe SSFPD is too quick to judge and that’s why people look down on them and won’t help because they are too busy looking down on our society and youngsters.

Aysha Haq posted: You said should talk about youngster since you do not know about the case and the kid. He was loved by all and everyone missing ever much. Your case has nothing to do with the murder of Joseph Maharaj so I really don’t understand why you are talking about an adult. This was a child and he was 14year old innocent and we all have been fighting for justice for him. Not unless you know about this case you should not post this like what you wrote. If you want something done then you need to fight the system like we are.

Fabian Mosqueda posted: If ANYBODY knows anything about any murder, SPEAK UP! It’s the right thing to do, this could be your child, brother, father, uncle, cousin, etc. etc.

Iris Jara posted: I was not knocking down on this murder case I was actually speaking on a separate one and giving an example of SSFPD lacking justice. If you took it the wrong way, that’s fine with me. I’ve lived in South City my whole life and know how their PD is and please don’t speak on what I should do because you don’t know what I have done. I’m speaking on SSFPD’s LACK OF JUSTICE, not on your case.

Everything South City responded to Iris Jara: This brings up so much unresolved stuff, my heart to yours for the unresolved murder and pain to your daughter (and you/family/friends). No one can imagine what she/you have/are going through. These are 2 different murders, yet murders nonetheless, that need to find justice to give some resolve to those left behind. Blessings on you and your daughter. We really need our community, our neighbors, to step forward and share what they know so PD can help us put this to rest (of some kind) {ksw}

Erick Salazar posted: Everything South City what are you trying to say “Do it for the money” people will only do it for that or because they want to change the community and want a safer place

Everything South City responded to Erick Salazar: I completely agree with you, ESC has said that over and over, do it because it is the right thing to do. Yet how long has it been and NO ONE has stepped up? NO ONE. So now SSFPD is offering $$ so maybe someone will be motivated by that. And if that is what it takes to get some justice for the senseless murder of Joseph and major injuries to Jesus – then do it for that. Whatever it takes, the person(s) responsible need to be outed. Period. Right? Their families deserve – NEED- to have this resolved. Our community needs this. I agree with you – it should be done because it is the right thing to do – but 17 months later – nothing. Let us hope that this $$ might be something that will bring the murder to light. Peace! {ksw}

Angelina Mariaa Cisneros posted: Honestly the case has been open for 17 months? And the cops haven’t done sh*t for this case. Joseph needs justice! This is another kid taken from us for what? Nothing, nothing at all. Joseph was loved by many! So just putting up the money award is nothing! Why don’t you put the reason why people should do this? For justice! And too take the people who killed him off the street! Honestly! SSFPD is wack and they need to the job!

Everything South City responded to Angelina Mariaa Cisneros:  You are completely right; people need to step up because it is the right thing to do, for justice. For Joseph, for Jesus. For their families. For our communities. But those that do know what went down are not coming forth – so maybe – just maybe that $$ sign will get someone to bring this to light and FINALLY justice can be served. Someone knows something – and they need to speak up – now. Get the word out – maybe someone will respond to a dollar sign. Because no one is stepping forth for a senseless murder of one of our own. Let’s get the word out there that this has NOT been forgotten and his murder is still being actively sought. By us ALL. {ksw}

Yesenia Benavides posted: What about the case of Jose Manuel Lopez who was murdered may 4th 2010 is SSFPD even worrying about that case? Smh (shaking my head) at SSFPD they are garbage

Aysha Haq posted: We all need to stop blame and everyone come together on this. The only reason that is Joseph Maharaj on is on everything South City is because we have been fighting for it. If you are out there fighting for justice then it will happen but do not go on this site and talk sh*t when we have been fighting with everything to get it here. STOP!!! This not the time.

We have contacted the media and every TV station to get the story out so I really do not understand why people are mad at the SSFPD posting this case since we are the only one out there fighting for justice.

Maybe if you all are fighting for justice then maybe you can get some media coverage. We have been fighting every day, time, & event and it took us a long time to get them to post the cases or any information about the other murder.

Murder is murder but no one knows better than I do what it takes. I do not just sit there and wait. We are doing peace walks, talk to media, and part of the coalition, national night out and other things to get the case resolved. You guys should stop complaining and do something about it. We have worked very hard and we call all TV show, Americans Most Wanted and other shows like that to get the word out.

I do understand that we all want JUSTICE but you should make an appointment go talk to the SSFPD like I do and work on getting justice. WE HAVE WORKED TO HARD TO GET THIS POSTED AND FOR ALL YOU OUT THERE THAT IS UPSET ABOUT THIS POSTING ARE WRONG. No one knows what it took us to get it here.

Please the community does not work together and there is people how do know what happened to everyone that is murdered but we need them to talk. IT should be about getting the community together to save the case not only SSFPD since they can only do what they can. WE as South City need to come together and ask for help from everyone in the city. I know it is hard but it will happen if we all work together instead of working against each other.

It should be noted that the South San Francisco Police Department had already put out notice of a $25,000 reward for the arrest and conviction of those responsible for the death of Ronald Figueroa, and also for the death of  Jose Manuel Lopez on May 13, 2010.  (Two rewards of $25,000 each)

your kid shouldn’t have been out that late at night… getting a hair cut… how dumb can you be thinking that hes getting a haircut at 9:30………. THINK ABOUT IT. No murder case is different, what’s different is how it was done… don’t think your case is better than others just because he was 14 out after dark…. I hope you do different for your daughter.