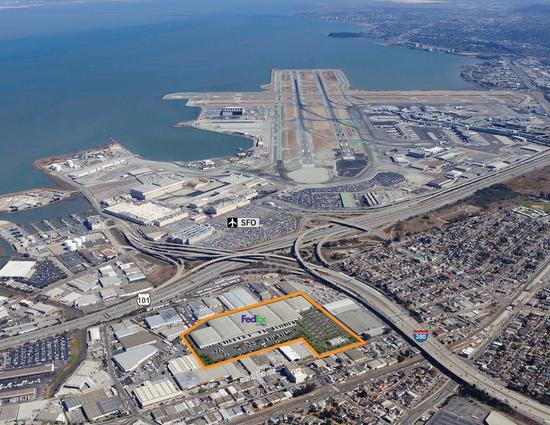 Everything South City is excited to see more growth in our city of various industries. With our close proximity to SFO and the San Francisco and Oakland ports, it’s good to see FedEx expand while looking to hire new employees next year.  Below was written by Blanca Torres
Blanca Torres
Reporter- San Francisco Business Times
Mar 26, 2013, 9:58am PDT

FedEx Ground is taking over the mostly-vacant SFO Logistics Center, where it could eventually house more than 500 employees.

The property sits on 26 acres less than a mile from San Francisco International Airport and formerly housed a warehouse and distribution center for the U.S. Postal Service.

“Our original business plan contemplated renovating the property into a multi-tenant business park,” said Jason Cranston, a broker with Cassidy Turley who represented the landlords along with Marshall Hydorn. “However, Orchard recognized the uniqueness of the property and helped transform our approach to focus on large logistics users.”

Angelo Gordon picked the site up in 2008 for $36.5 million and then brought on Orchard Partners in 2011 to revamp the site and lease it up. Negotiations with FedEx started more than a year ago, Cranston said. The company was represented by its national brokers Larry Teel and Kirk Bittel of Fischer & Co. and Brenton M. Wickam of Coldwell Banker Commercial in Burlingame.

As part of the FedEx lease, the landlords demolished 118,672 square feet of space to take the property down from 571,723 square feet to about 453,051 square feet and free up space for parking.

The federal Drug Enforcement Agency occupies about 34,000 square feet in the SFO Logistics Center. The property also has about 9,100 square feet of retail space available.

FedEx plans to occupy its space in May of 2014 after completing work on tenant improvements. It plans to hold a groundbreaking ceremony for the renovation on Wednesday.

During in the past decade, the $9.5 billion company pushed to sped up its delivery in the United States and doubled its volume to about 5.6 million packages per day.

More than 82 percent of packages land at their destinations in three days or less, more than 62 percent in two days or less and more than 24 percent by the next business day.

FedEx has about 59,000 employees nationwide and operates in more than 500 locations.

“Having the opportunity to work with FedEx Ground again has been a real pleasure, and I am especially appreciative to the City for its support and user-friendly attitude towards helping us make this deal,” said Tyler Higgins, managing partner of Orchard Partners.

Orchard Partners, founded in 2007, has been involved with more than of $1 billion worth of property transactions on the West Coast. Angelo Gordon is a private investment advisory firm founded in 1988 that manages approximately $25 billion in assets.