It is with a great sadness we have learned of the passing of Randy Royce, South City native, SSFHS c/o ’68 grad. Randy was raised on Magnolia with his parents and his brother Gary (Gary has his law office on Grand Ave).
Randy moved to San Carlos where he continued to be a mover and shaker and has left a legacy for us to remember and honor.
Our thoughts are with Randy’s wife Yvette and his sons Roger & Todd, and his extended family and friends.
Thank you Randy for making our world better for having been in it. You are missed. Blessings on you. 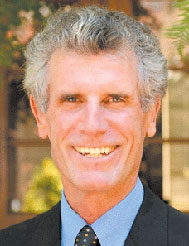 Former San Carlos mayor Randy Royce died of cancer Tuesday, leaving behind a legacy of longtime volunteerism, political bravery that contributed to the city’s pioneering outsourcing and an indefatigable spirit both on and off the dais.

Royce, 62, leaves behind his wife, Yvette, and grown sons, Roger and Todd. He died at home in hospice care after years of battling the cancer that eventually spread to his brain and led to a tumor around his spine that hindered his walking. But those who knew Royce and saw him in his last weeks said he was still quick with a smile and handshake, with the same positive attitude he carried through his civic activities, his financial career of 23 years with Hewlett-Packard and including acting chief financial officer of three startups in its Agilent division along with turns on the city’s Planning Commission and City Council.

“I really think the greatest thing he gave me was the chance to learn from him just as an adult and a man. Randy had probably the strongest backbone of anyone I ever met,” said friend and former fellow councilman Andy Klein.

When Royce was named the city’s 2011 Citizen of the Year, former mayor and neighbor Tom Davids commented at the awards ceremony that Royce’s neighborhood was special because he was known to set up computers or power wash houses for neighbors.

As word of his passing moved through San Carlos yesterday, and flags were lowered, others echoed that same theme of helping others. He coached AYSO soccer, served on the San Carlos Sister Cities Association and chaired the city’s 75th Anniversary Committee. He traveled to Pass Christian with the city’s relief effort in the wake of Hurricane Katrina to help rebuild the Mississippi town and volunteered for so many causes friends and colleagues yesterday conceded they likely couldn’t provide a full list.

“There’s almost not a group you can name in town that Randy Royce is not connected with,” said Assistant City Manager Brian Moura.

Every time one enters the San Carlos historical museum, Klein said, they see a plaque dedicated to Royce.

Despite being diagnosed with lung cancer, Royce ran for City Council in 2007 and was the top vote-getter. Four years later, he was defeated for re-election, a move that fellow councilmen like Ron Collins chalked up to his “political bravery” in promoting the outsourcing of city services like police and fire.

“He recognized the warning signs our city was approaching a fiscal crisis and was willing to stick his neck out and do the right thing even at the risk of his own popularity,” said Collins who ran on the same ballot.

The controversial actions during his mayoral tenure moved the city from a $3.5 million structural deficit to a budget surplus of more than $500,000 in just over a year and spurred other cities to consider outsourcing.

“He was the right man for the right job at the right time and I think that will be his legacy. He saw a problem and was willing to fix it and never regretted it,” Collins said.

“He was just as happy taking photos at Hometown Days as anything else,” Eaton said, referencing Royce’s turn as the unofficial city photographer.

As mayor, Royce also pushed Pacific Gas and Electric to conduct hydrostatic testing of natural gas lines after the deadly San Bruno explosion and fire. San Carlos then became one of the state’s first cities whose lines were tested this way and upgraded with automatic shut-off valves.

Royce was also remembered for his attitude, both in the face of cancer and political battles and throughout his life.

“I wish I could get his spirit and put it in me all the time,” said Mayor Bob Grassilli who estimated having known Royce for 10 to 12 years. “He always had this impish grin and smile. He had an indomitable spirit that just would not die.”

Grassilli said Royce’s legacy is certainly one of civil and political service but that he’d also want to be remembered as a good father and good husband.

Royce was also a good friend, those close to him said.

He founded a men’s lunch group with members meeting once a week at a different restaurant. In January, when they learned Royce’s immobility made his attendance impossible, the group moved lunch to his house instead, Collins said.

Tuesday afternoon was the weekly lunch date and they spoke of how it might not be long now, Collins said.

An hour later, Klein let the members know Royce had passed. The same day and hour as his beloved lunch group — a fitting time, Collins said.

At many years his junior, Klein said he grew up with the legend of Randy Royce rather than seeing him become the man he was. And once he had the chance to serve with Royce on the council?

“He was everything I expected him to be and more,” Klein said.

A memorial service for Royce is planned at the Hiller Aviation Museum. Further details are pending.