Everything South City has shared the report from our South San Francisco Police Department on our Facebook Page regarding a thief hitting our local businesses and stealing IPADs and IPHONES while distracting the personnel.

Heads up- IPAD/IPHONE Thief among us hitting local businesses SSFPD put out this warning so be sure to contact Det Garcia 877-8916 or email him at mike.garcia@ssf.net or PD at the anonymous # 952-2244.

If happening in real time always call 911 after you are in a safe place.

Since 2/27/2013 the City of South San Francisco has had numerous iPhone or iPad thefts. The suspect has been entering businesses posing as a customer and steals iPhones and iPads. The suspect will often engage employees in long conversations and will stay inside of the businesses for a long amount of time.

The suspect identifies himself as “Mike” or “Michael” and tells employees he has just inherited a large sum of money. When employees are distracted, the suspect steals the phone or iPad from the employee’s desk. The suspect has burglarized employees from a furniture business, dental office buildings and automotive dealerships.

The suspect is described as a White Male adult between 25-30 years of age, approximately 6′ 2″ to 6′ 4″ tall with a thin to medium build. The suspect had shaggy brown hair but has since shaved his head as of 3/25/2013. The suspect appears to like wearing a T-shirt with a prominent LRG brand logo on the front.

The suspect struck in South San Francisco FIVE times in the past two weeks and has stolen five (5) iPhones and one (1) iPad.
The same suspect has struck three (3) times in Burlingame since 2/27/2013. The suspect appears to strike during the daytime and on all days of the week, including weekends.

Anyone with information is asked to contact Detective Mike Garcia at (650) 877-8916 or by email at mike.garcia@ssf.net. 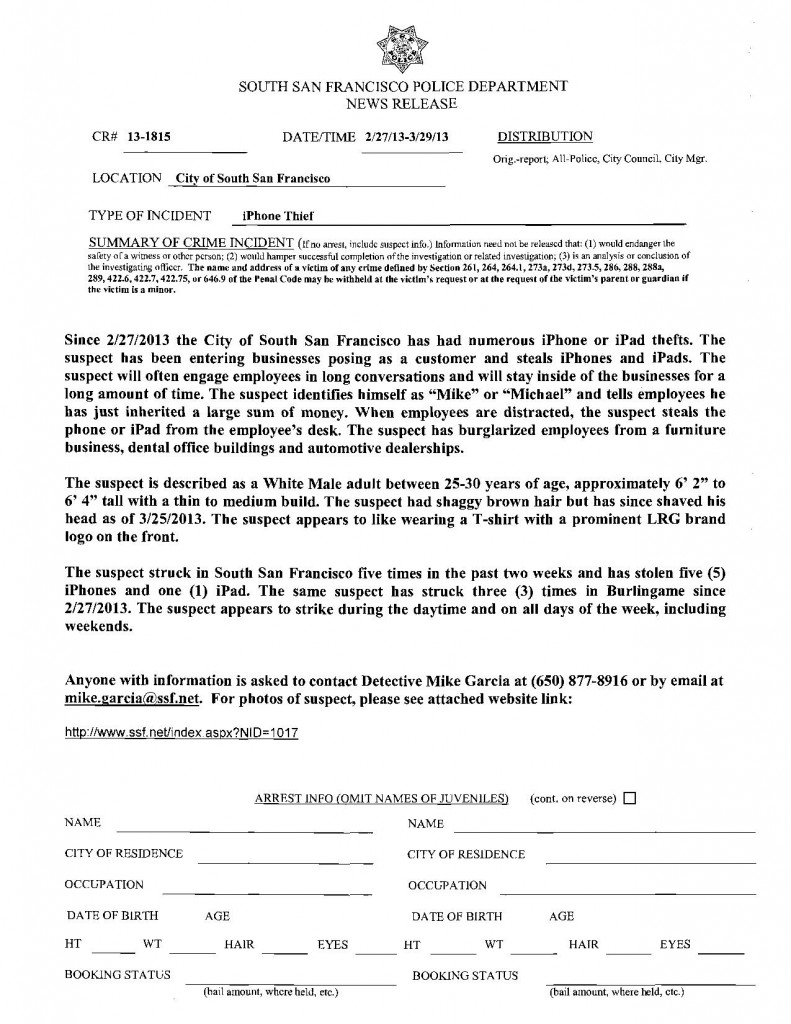 The pictured subject has been going in to businesses, distracting employees, and then stealing their iPhones or iPads. The subject is very patient and will wait for an extended period of time before committing the crime.

The subject has committed the same crimes in the Peninsula, Marin, and Sonoma Counties.