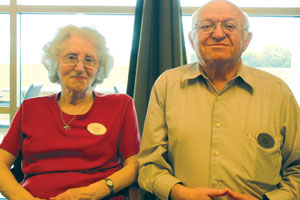 Rarely does a knock on the door invoke fear.

For Jewish people living in Europe when Hitler took power, a knock meant uncertainty. It could mean that family members would be taken never to be seen again. It was a noise most associated with fear. Today is Holocaust Remembrance Day. For those who survived, sharing their stories remains to be important.

Seventy-eight-year-old Al Kuhn explained that he once shared his experience with a group of 12- and 13-year-olds.

Sharing the experiences becomes particularly important for survivors who want to be sure that future generations understand the challenges experienced by those who lived through World War II. On Friday, three Jewish survivors — Al Kuhn, his wife of 46 years Liliane Kuhn, and Zdenka Levy shared their experiences. All live in Moldaw Residences in Palo Alto. While impacted by the same war, their stories are quite different. How they escaped and remained unharmed personally often came in unexpected ways. But each emphasized the importance of sharing history to be sure it’s never forgotten.

Al Kuhn grew up in a small German community. A knock on his family door changed everything. They were among local Jewish people who were rounded up in the middle of the night. Women and children were separated from the men, who were then imprisoned. Kuhn was able to return home where they witnessed soldiers destroying the town’s synagogue. He described how the religious building had hard benches, which had special feather-stuffed cushions. Those were thrown into the fire, said Kuhn who then saw feathers going into the sky. Those same feathers rained down on the community for days, he said.

His family decided to sacrifice everything for a way out. They had owned and run a general store — which slowly lost patronage. When a wealthy man was looking for cheap labor to run a farm he planned to start in Bolivia, Kuhn’s father told a lie to get his family the job. Kuhn’s mother traded their silver to get the dollars needed to purchase a ticket — currency Jewish people weren’t supposed to have at the time, he said. The family was then on its way.

On the trip, the family was allowed to bring some things with them — a sewing machine, some tools and the tuxedo Kuhn’s father wore on his wedding day. Today, he still has two of the 70-year-old dish towels embroidered with his mother’s initials.

The Kuhn family was essentially the last one to escape his village in Germany. Since then, those tracing what happened to residences have created lists of those who died. The names are familiar to Kuhn, who was just a little boy at the time. His family lived for 10 years in South America. It was in 1949 that his family was able to make it to the United States.

His wife, 75-year-old Liliane Kuhn, was born in Paris to German-born parents who had fled their homeland in 1933 when Hitler gained power. Her father joined the French Foreign Legion. Her mother, along with another woman, ended up walking about 300 miles from Paris to Lyon pushing young ones in a stroller. Along the way, a German soldier questioned the two women who were trying to escape but an officer insisted the ladies be allowed to pass. Once in Lyon, the mother with a young baby found an apartment in a fifth-floor walk-up. Their Christian neighbors offered to help hide Liliane Kuhn with their family who owned a farm in the mountains. The family essentially fostered the little girl for four years. Her parents would visit when they could and Liliane Kuhn found herself bonding with the family’s son, who acted as her older brother.

“At the end of the war, I was returned to my parents. I was very lucky,” said Liliane Kuhn, who has vivid memories of being taken to the farmhouse as an infant but none of being returned to her mother.

Kuhn recognizes how lucky her family was. Through the help of others, they remained safe. She remained in contact with the family that took her in over the years.

Looking back, Kuhn noted that, while in school, her history books never discussed either World War I or World War II — a period she must have learned about from her parents.

The couple ended up meeting on a blind date in New York. They only moved to California a few years ago but their son lives nearby in San Mateo.

Levy, 87, was born in Yugoslavia where she lived until 1941 when she was 15. Then, her comfortable life as a teenager came to an end, she said. Changes came on slowly but were noticeable. For example, Jewish people needed to wear a yellow star on their clothing. Levy, who often tells her story to school children, had a felt yellow star on hand that she made to give a visual. Once the star was on her clothes, Levy noticed friends she had her whole life treated her differently, hurriedly crossing the street to get away from her. She watched as Jewish families had land and possessions taken away and professionals were told they could no longer do their work.

Knocks started on nearby doors — a sign that someone in the family would most likely be taken. First, Levy watched her cousin leave to work in a labor camp, at least that was the explanation at the time. Years later, a mass grave was found on the edge of town. It was assumed those young men who were first taken were inside. In total, Levy lost 11 family members in the Holocaust.

Her immediate family dealt with many more knocks on the door. The next knock required that she, her mother and father go to a fairground. After a night, Levy’s brother came waving papers signed by the men working in the factory their father managed. The workers had signed a petition to give him special permission and the family returned home. Those left at the fairground were deported the next day and never heard from again, she said.

Special permission didn’t keep Levy’s father safe for long. Another knock at the door came and this time the militia wanted Levy’s father. He was sent to a brutal camp in Croatia. He did return to the family but, at 50, Levy recalled her father looking like a man of 90 with two black fingers and eyes that had seen horror.

The family relied on false documents in an attempt to escape to Italy. Levy and her brother attempted to get into the country first but were arrested. After 12 days in jail, the siblings were freed. Two months later, while in Italy, the family was again taken by Italian agents on a train for one and a half days to the southern part of the country to a concentration camp. Those staying at the camp quickly approached Levy and said the situation wasn’t that bad. She stayed there for 18 months before U.S. soldiers came to free the area.

In late 1943 or early 1944, Levy said they were relocated to empty villas. Through word of mouth, she learned that President Franklin D. Roosevelt would allow refugees to travel to the United States if they promised to return after the war was over. A 15-day boat trip later, there was crying and song when travelers saw the Statue of Liberty. Levy spent one and a half years at an old Army barracks in upstate New York.

At the war’s end in 1945, President Harry S. Truman signed a law to allow the refugees to stay. It was the first step for Levy to becoming a naturalized citizen. She eventually spent 28 years in San Mateo before moving to Palo Alto.

“It’s important for the younger generation to know that part of history, to hear first hand from a survivor,” said Levy. “I’m hoping they will remember the stories; how cruel the world is and look for peace.”

← JOBS! It must be Monday!
Breakfast at the ELKS helping disabled children in our community →