Jeff Galaviz grew up in San Bruno, attended local schools and played sports through out the county and well into his college years at Skyline College. Looking at career options, Galaviz chose the Marines and served two tours in Iraq. While stationed in Camp Pendleton, Galaviz married  the love of his life, long time girlfriend and San Mateo resident Melinda Fitzpatrick.  After his honorable discharge Galaviz chose to continue a career in the line of public service by becoming a police officer.  He and his wife Melinda soon became proud parents to a beautiful son in 2011. They were further blessed with a beautiful daughter in February 2013.

Their life was changed when Galaviz was diagnosed with testicular cancer. The City of Richmond, where Galaviz is a police officer, has notified them they will no longer be covering his medical insurance.  The current treatment consists of nine weeks of chemotherapy and although Galaviz would like to return to work immediately, he will be sidelined for six months. The cost of his medical insurance is $2,000 per month. Everything South City has partnered with the Galaviz Cancer Fight to help them meet their goal of $12,000 so they can focus on Jeff’s recovery and not on medical bills. Jeff is one of our family members so that makes this situation even more personal.

We invite everyone to the first fundraising events which will be held June 1st 8-Midnight at McGraw’s Bar & Grill 864 El Camino Real in Belmont and is open to the public. We will continue to add updates on Jeff’s condition and on our fundraising efforts.

Donations can also be sent to:

Thank you for any help you may be able to offer and for sharing this information with your circle of friends.

Thank you for your support. 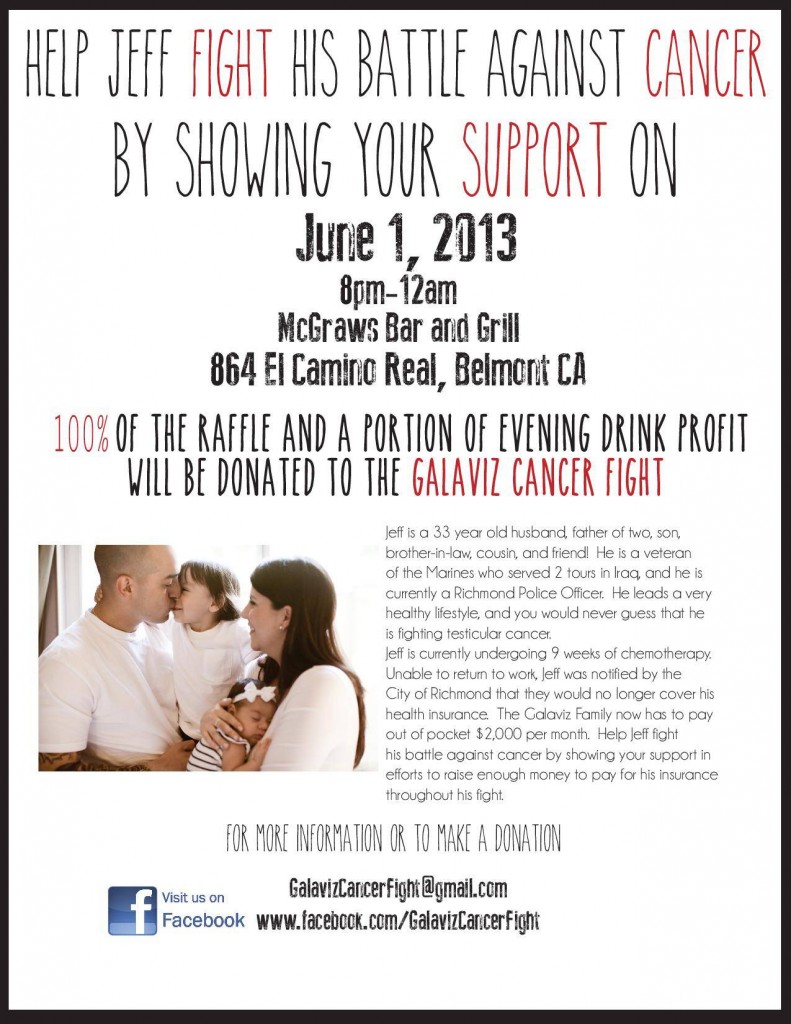