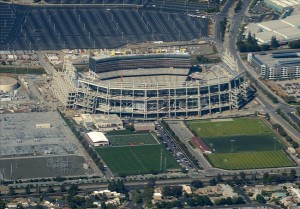 The San Francisco 49ers and Levi Strauss & Co held a press conference and pep rally on Wednesday to announce the company’s proposal for the Niners new stadium naming rights. The proposal will officially be presented to the Santa Clara Stadium Authority (SCSA) on May 9. The proposal is for a 20-year, $220 million naming rights agreement for the new place to be called “Levi’s Stadium.”

The SCSA oversees and approves the functions of the 49ers new stadium set to open in 2014. It’s a foregone conclusion the new stadium in Santa Clara will be called Levi’s Stadium and feature the company’s name throughout the stadium. One reason is because the 49ers basically run the SCSA. Plus, you don’t hold a press conference and pep rally to announce the proposal if you didn’t think it will get approved.

No matter what the new Santa Clara stadium is called, I will likely refer it as The South Stick (Santa Clara is in the South Bay) or New Candlestick Park, rather than the official name. If Levi’s Stadium is the name I guess it’s better than names Candlestick Park had in previous years, like Monster Park and 3Com Park. Since the team is moving 40 miles south of The City, it’s great to see a partnership with a San Francisco based company. Levi Strauss founded the company in 1853 to open a dry goods store for gold miners in San Francisco. 20 years later, the company started making the first denim blue jeans. 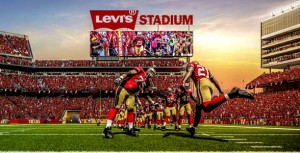 Here is a picture released by the 49ers of what the signage in the new stadium could look like:

Here is a picture released by the 49ers of what the signage in the new stadium could look like: