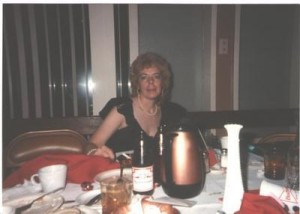 Delores Martinelli died unexpectedly in her home on May 1, in Delhi, California at the age of 65.

She was born on October 26, 1947 to James and Gladys Wilson, raised in South San Francisco and was the youngest of six. She graduated South City High School in 1965. She met the love of her life Ronald Martinelli at the age of 14. They were married on November 12, 1966. They bought a house in the Linda Mar area of Pacifica in 1970, where they raised their four children.

After raising her children she returned to college where she earned her degree in Cosmetology. Shortly after working in the industry, she opened her own salon, Family Styles, with her oldest daughter in Sharp Park. Delores and Ron retired in the Central Valley.

She was an amazing grandmother to her seven grandchildren who she adored and spoiled rotten.

Delores lived most of her adult life with Multiple Sclerosis.

@ Skyline Blvd., San Mateo, CA. Followed by a celebration of life reception at Crystal Springs Golf Course at 6650 Golf Course Dr, Burlingame, CA.In ieu of flowers the family requests a donation be made to the MS Society in honor of Delores. Go to http://main.nationalmssociety.org/goto/deloresmartinelli