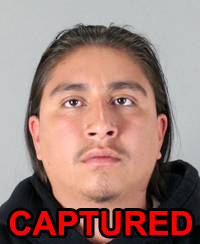 Ibarra aka Tweety was captured today by police

South San Francisco Police have announced they have apprehended Ivan IBARRA (aka: Tweety) today.  Earlier the police had alerted citizens via their website about the suspect at large. Ibarra, considered armed and dangerous, was wanted on a NO-BAIL arrest warrant for Attempted Homicide after eluding police on May 15 and again on May 21. Everything South City thanks all those who have shared this information and worked to keep our city safe.