Tuesday morning, as Melissa Ponelis Kohlmeister was putting her children in her car she noticed a coyote just walking up the street on Alta Mesa. Kohlmeister was able to get two great photos, one as the coyote approached her, and one as it continued down the street. We thank Melissa for sharing these great photos with us all. Below are some comments by other neighbors in town. 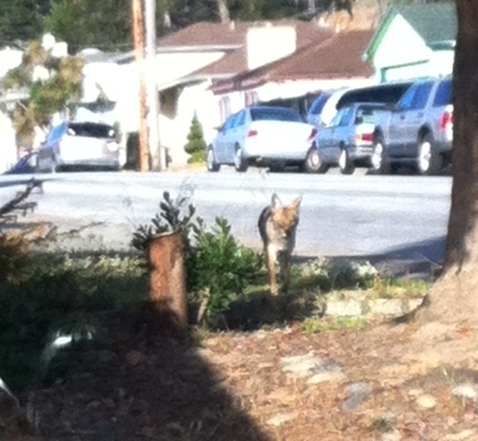 Paul Andreini keep your pets indoors. It’s looking for the food chain. Marie, They’ve actually been seen crossing the GGB from Marin County in the past years.

Keri Stark Great picture. They need to be respected and protected.

Everything South City Thanks Melissa Ponelis Kohlmeister check your email – we didn’t want to add your name w/o your permission. THANK YOU – AWESOME PHOTOS!!

Jim Chazer I find it amusing that so many people find them so cute. They’re adorable until they kill your kitty or bite some kid. The fact that they’re so I afraid of humans is NOT good.

Michele Ferrario Burbano We keep building and where are the wild animals suppose to go? Coyote’s are beautiful animals but they are wild so be safe.

Francesca Maggi is this a fox or a wolf ?

Paul Andreini We’re waiting for you to get back.

Muriel Pleasic Peninger they should all go to the golf course like the buck did way back in the seventies. until someone shot him. How awful that was.Please dont kill them people????

Jeannette Yesitsnineletters better a coyote than a teenager with a gun….

Keri Stark That is a little guy.. he looks harmless. So sad they don’t have the space they need.

Celina Gomes Sutton I saw one on Alta Loma @ Camaritas Ave. on my way to pick my son up from Little Hugs Preschool at 3pm! I guess they figure they were here first!

Vaughn Leslie Hyndman I agree it looks pretty small. But still, keep your cats inside!

Rob Cormican haha he ran down clay! right behind my self and a friend on the corner of Cliffdon , I thought he came from serra vista

Jen Busch I saw one up by ocean beach last night! Ran right in front of the car across the great highway.scared the crap outa me lol

Julie Formosa Are the coyotes going after peoples pets? Has there been any reports?

Everything South City None that we have heard about. Yet it is good to keep small pets indoors esp at nite. also do not keep pet food out n keep garbage cans closed tight. 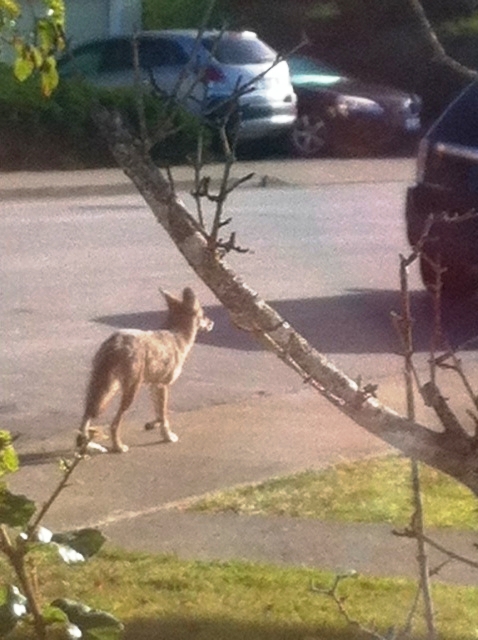 Anita Porpoise They are over the Peninsula, they come down from the hills/mtns looking for water and food. They will turn over your garbage cans and dine. But if you have small animals, they will naturally go for them if they are hungry. If you have a dog, you need to take more care. Dogs protect their property and are aggressive. Coyotes can protect themselves and probably win a dog fight.

Anita Porpoise There are raccoons and opossums also running a muck in South City.

Cathy Mueller I know that house!!!!!

Vanessa Pacheco We had a raccoon at my house a couple of weeks ago (on Grand). It feels like I’m living in Tahoe again.

Patricia Baker I think I would rather deal with a coyote than a raccoon. Those South City raccoons are pretty bold and aggressive (plus they once beat up on our cat).

Keri Stark again…these animals were here first! they belong here and we don’t!

Keri Stark and yes there is also a coyote that lives in SF on Beranl Heights. there is a documentary on PBS about him. he doesn’t bother ANYONE!

Sandra Perez-Vargas I hope this little one stays safe.

Janel M Chrestenson Pearson I hope people aren’t feeding these guys. If you feed them, they will stay in the neighborhoods.

Dan Dowdell Expanding population in SF also. I saw one by the beach 2 weeks ago and one by Twin Peaks.. 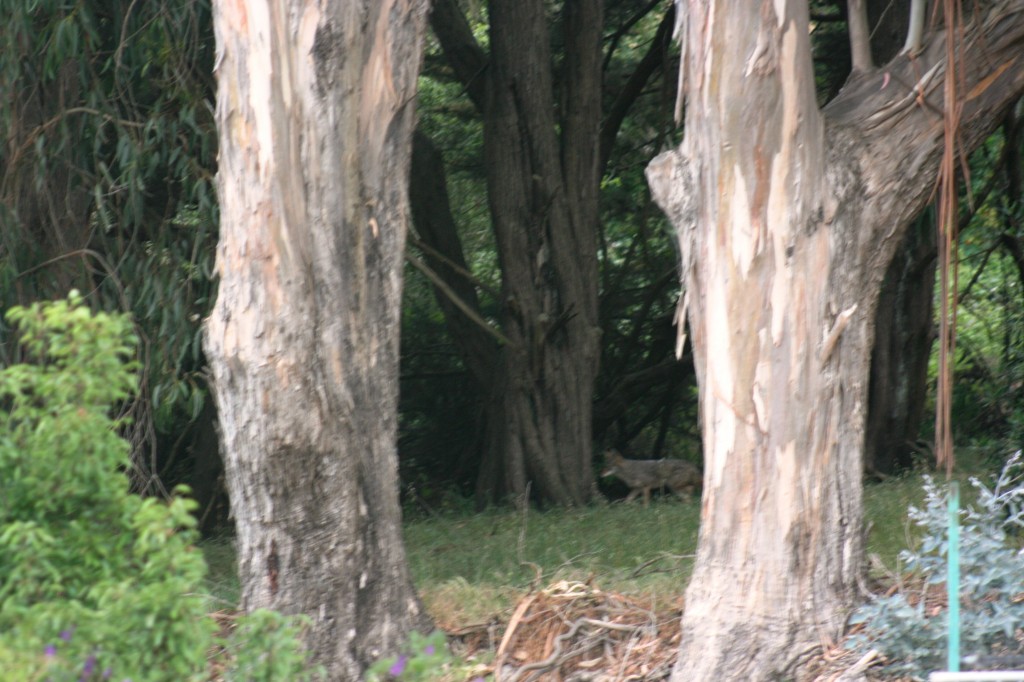 Roger Cain, South City Photographer and admin assistant on Everything South City, reported seeing his first coyote in South San Francisco on Sunday June 9th at the NE corner of Junipero Serra and Westborough at 5:15pm.  The day before, on Saturday, Karen Ridgeway-Viera posted she saw one that had been killed, laying out on the center divide.  Police dispatch had identified it as a dog in their report and had referred it to another agency, SPCA.

Ridgeway-Viera says, ‘I saw it yesterday at 9:30 Am at Juniper Serra and Westborough. I had made a left from Junipero Serra onto Westborough Blvd. towards El Camino and it was in the center divide. Unfortunately it was struck and killed!’

Justin Guzman I was wondering if they were still around. Heard a lot of them had gotten hit by cars

Justin Cresci There are all up at near Skyline, I hear them howling and hear them in the woods every time I come home from work at 1am

Everything South City @ Karen Ridgeway-Viera are you talking about the one I saw just one hour ago? Is there a dead one on the side of the road there now?

Cathy Twochisncat They should make a map with pinpoints to show the sightings. That way people with small dogs and other pets could avoid those areas.

Everything South City ESC has been doing an informal tracking.

Karen Ridgeway-Viera Yesterday at 9:30 Am at Juniper Serra and Westborough. Made a left from Juniper onto Westborough towards El Camino and one was in the center divide.

Karen Gerstle Romagnoli I saw in on Junipero Serra and Westborough a week ago Saturday morning. Poor thing must be terrified. They’re usually pretty harmless.

Everything South City this was today at 5:15 pm, maybe it was it’s mate looking for it?

Karen Ridgeway-Viera I wish there was a way to keep them safe up in the hills by Sister Cities or around Crystal Springs Resavour.

Crystal WolfLady We should make some Coyote Xing signs for people to be CAREFUL! We want our wildlife alive and well.

Sandie Ferrari I thought I saw one in Winston Manor – on Clay and Longford.

We had another neighbor share a few photos back on May 28th. The photos were taken off of Junipero Serra near the Daly City boundary. The coyote coloring blended in so well, it was incredible our reader was able to get a few photos. 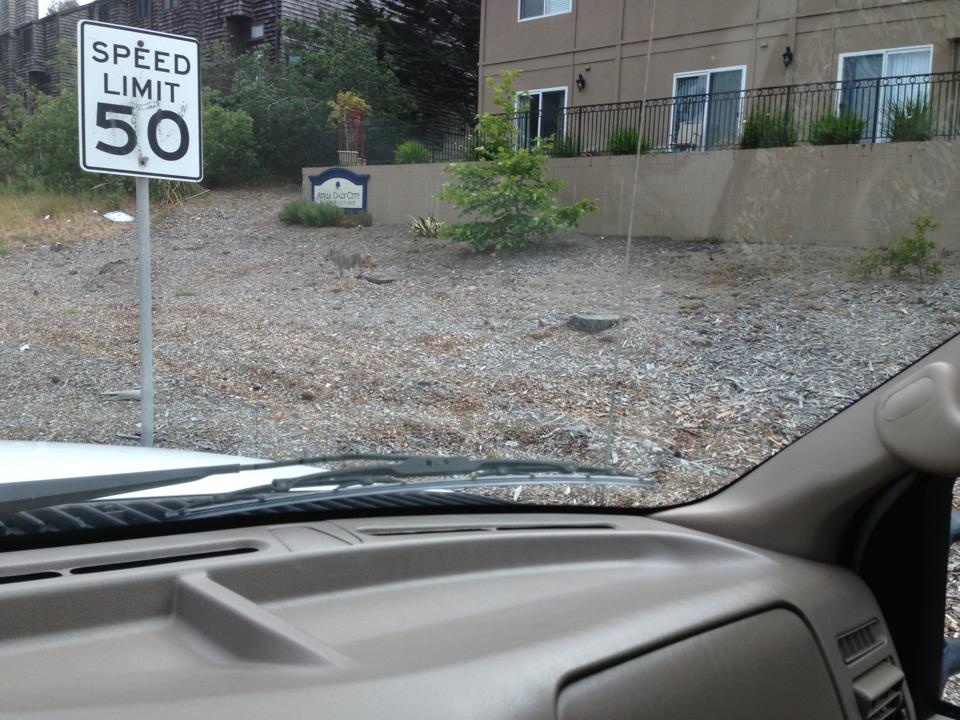 If you look close you can see the Coyote blending in with the background in this photo taken on May 28th.
Photo: D.O.

Everything South City It is below the sign, a pinch to the right…. blends in so well.

Moserod OSe below the apt? sign. very faint , the shadow is darker than the animal

Everything South City We should print this out and circle it – it is tough to see but yep he is there! Thanks Moserod OSe.

Keri Stark just saw a coyote, a good sized one crossing Juniperro Serra at Westborough! I am pretty sure it wasn’t a dog, he was traveling fast…but i was sad to see him around so many cars

Michelle Fontanosa-Yee Friends of mine saw an adult coyote quickly going by, a few months ago at El Camino and Arroyo in South San Francisco.

Everardo Salazar Very camouflaged but I see it!

Crystal WolfLady I think a band should write a Song about the So. City Coyotes “a coyote strolls by Gunthers…on the way to…” lol. Hey we are proud of our wildlife!

Alexis Dayers Caught a coyote walking down my street in Daly City, not too far from Westmoor High…they get around!