We have had quite an increase in coyote sightings the past few months and here are a few recent updates.

Charles Martorelli shared this photo and information:  “Just got back from my morning dog walk in west Winston Manor. I came across 2 coyotes on Dundee drive by Wicklow. They were eating a small animal in a front yard.” 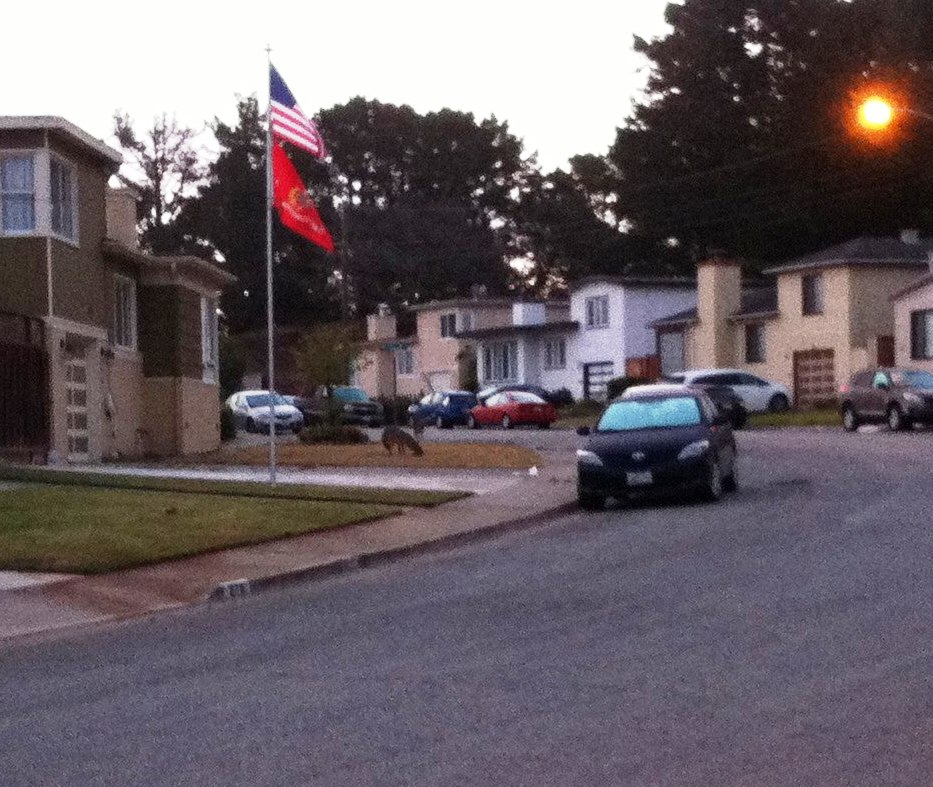 Sandie Ferrari Hope it was a gopher or two!!!

Courtney Tetreault Should keep cats inside at night

Maria Maldonado Barba Wow, that’s right up the street from me. Getting closer and closer to home.

Dan Anchick Seems the original home builders from the 40’s and 50’s didn’t eliminate all the native animals. Oh wait, maybe the coyotes were displaced by all the condos on Gellert or scared by the construction at Westbourough shopping center or even the re-zoning project near Chestnut. Or companies buying land around San Bruno mountain. Coyotes don’t line city council pockets.

Barbara Ann Hager Pierini that’s what happens when there’s houses built on as much land as possible..they have nowhere else to go. Keep the cats & Chihuahua’s inside & live with it.

Brian Cassidy My wife walks the dogs by that house in the mornings…. doubt the coyotes would mess with 2 pitbulls though

Dan Anchick Well, say goodbye to the coyotes. Non native humans of SSF & San Mateo county will be afraid of anything moving next to their bubble. I can hear the 911 calls to animal control now.

Dan Anchick ^Afraid of any creature.

Karen Gerstle Romagnoli I’d rather encounter a coyote than a pit-bull. They’re the ones that should be outlawed.

Dan Anchick I can’t wait till the true colors of coexistence shine through.

Julie Bettencourt Cliff I hope it’s just gophers, and not a beloved pet.

Maureen Oliver At around 9am this morning we saw a cats head on a lawn about a block away from Dundee . Keep small pets indoors !!

Julie Formosa I think it’s time to round up these coyotes and bring them to the countryside if they are going to be killing domestic animals in our neighborhood. Yikes, that’s horrible a cats head on a front lawn. That’s not ok.

Brian Cassidy Only a moron would make that comment about pitbulls

On June 21st Jessica Adkins shared this photo that her boyfriend took along with this information “Buri Buri had a little visitor yesterday morning. My boyfriend said it was even playing on the grass jumping around at around 7:30-8am” 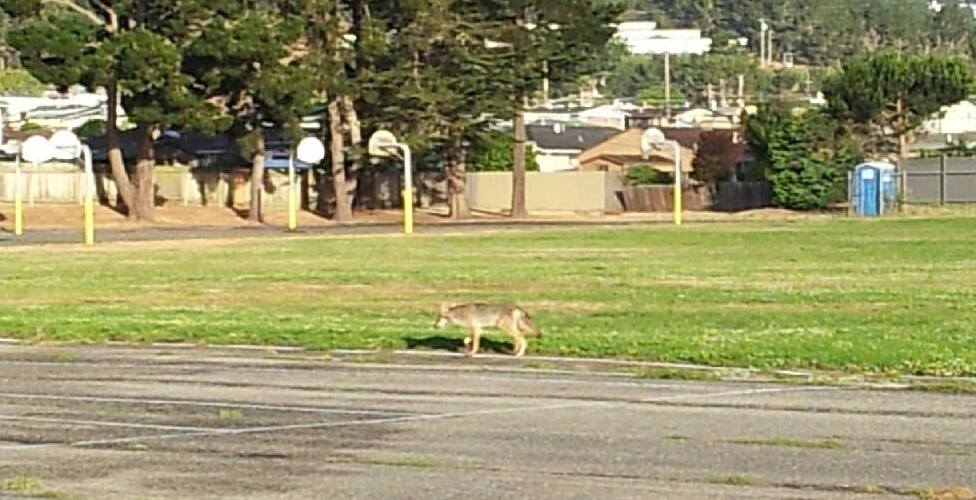 Keri Stark love it, would it be so cool if they could live amongst us like the raccoons do!?

Yolanda Buckley I agree with you.

Jeannette Yesitsnineletters I’d feel much safer seeing a coyote wandering in my neighborhood than anyone wearing baggy pants.

Antonio Xavier Gomez Must be a juvenile. N hungry. Somebody’s got to have a chihuahua,Yorky, Pekinese or cat they don’t want anymore ……..

Keri Stark I think they may be travelling more than we know and doing better than we think. from Montara to Skyline College, then down Westborough to the golf course…then up chestnut to SB Mountain…who knows…maybe they are roaming free-er than we think! they have come from Marin to SF so why not from Pacifica or more south to SF…

Ashley Hope That was their grass long before we built a school there. Sad we take over their land then freak out when we see them

Janel M Chrestenson Pearson I’ve never seen them wandering around town. They seem to be pretty cozy just hanging around.

Antonio Xavier Gomez They’re actually beautiful animals. Oh. And they will eat the growing raccoon population down, as well as the possums n skunks.

Michelle Brosna Ann Brosna mummy this is our backyard!

Karen McIvor All there area where they live is being taken away and either developed or cut down, I feel sorry for them they used to have more space on Sign Hill but now there are too many houses and also where The McClellan Orchid was.

Sharon Albera Why are they coming into residential lately. They never use to.

Ann Brosna Omega, this is my backyard….a bit too close for my cats/dogs. I see my fence….

Thanks to Todd Rael for this early morning share. “Our little coyote was up by Westborough park/ SSFFD station 64 this morning around 7:00” 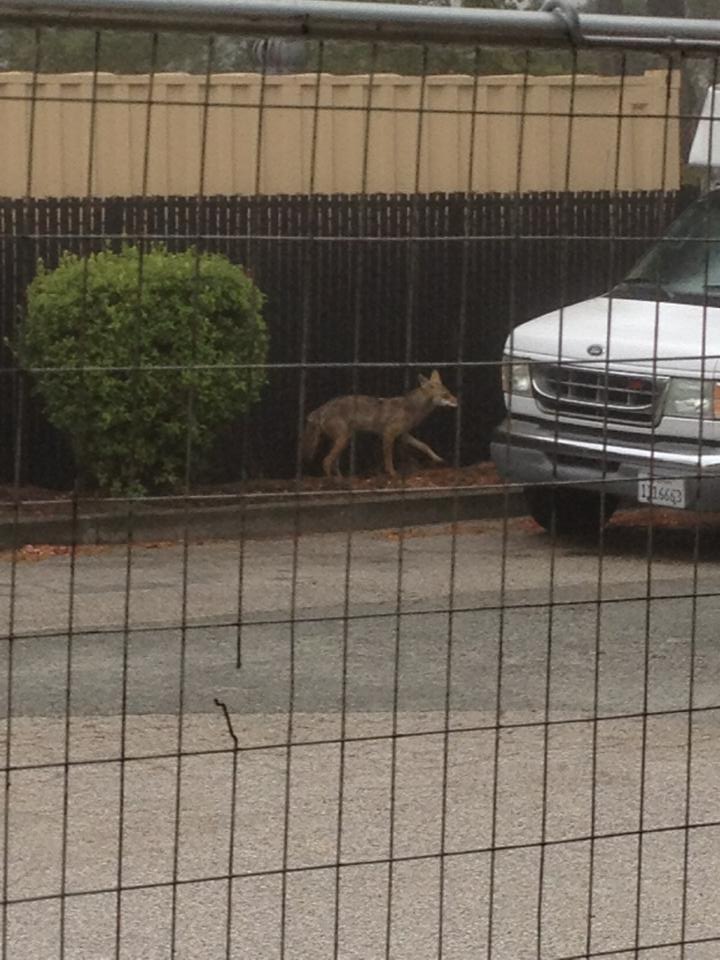 Cindy Langley Its not scary they are shy and hungry, they are the ones scared

Annette Moran What with all the wildlife in South City

Janet Remolona Blecha Hahaha. Thinking ‘Over the Hedge,’ the wildlife is probably wondering, “what’s with all the people in South City?!”

Raquel Quarneri I agree. It’s not scary it’s rather sad that they’re feeling so hungry n desperate they risk their lives to get food.

Sharon Kay Gustilo Meyer I thought I saw one walking on the north side of Sign Hill the other day.. it could have been a dog but I highly doubt it.

Clarence Kong hunting all the dogs that are missing.

Debi HdzHorny looks like the same place and coyote from over a week ago.

Michelle Milam-Alexis shared this “Coyote sighting just a few minutes ago. I was driving so couldn’t take a picture. He ran across 4 lanes of traffic on Westborough into the golf course.” Below are responses from our Facebook page:

Jim Chazer At some point a bunch of cats and small dogs are going to end up dead and all you people that think these coyotes are cute will have another think coming.

Anita Porpoise I worry about hitting them at night on Westborough…I’m the clown with the high beams on.

Crystal Trevino Why are there so many coyotes in SSF. When I lived there (60’s thru early 80’s) I don’t remember coyotes.

Patti Rodriguez-Daly That is so very scary……wow and Good Lord A Mighty!!!!!

Theresa Tetreault-Mathis Their population is growing. They’re really bad early in the AM on Juniperro Serra. Generally they’re more scared then we are BUT if they reach pack levels it will be another story.

Janel M Chrestenson Pearson Seems they may need to be relocated…

Mary Pack Are you sure he wasn’t teed off?

Lourdes Bolfango These are juvenile coyotes. Chances are their parent was the one killed early last month. Since they don’t have an elder to feed them in their den, they have had no choice but to find food on their own. They will move on or learn to hunt in the dark once they mature. Six is the average number of pups in a coyote litter. It ranges from 4-12 in one litter. If you’re a responsible companion pet owner/guardian, the safety of your pet is in your hands.

Janel M Chrestenson Pearson   FEEDING COYOTES WILL MAKE THEM BECOME DEPENDENT AND LESS WARY OF HUMANS. KEEP WILD THINGS WILD!
■DO NOT APPROACH OR TRY TO PET A COYOTE: THIS MAY PROVOKE THEM.
■FEED PETS INDOORS: OUTDOOR FEEDING ATTRACTS MANY WILD ANIMALS!
■SECURE YOUR GARBAGE: COYOTES, LIKE DOGS & RACCOONS WILL KNOCK OVER TRASH CANS OR TEAR OPEN TRASH BAGS.
■CLOSE OFF CRAWL SPACES UNDER PORCHES AND SHEDS: COYOTES USE SUCH AREAS FOR RESTING AND RAISING YOUNG.
■SECURE YOUR PETS: COYOTES VIEW PETS AS POTENTIAL FOOD ITEMS. PETS SHOULD NOT BE LEFT OUTDOORS UNATTENDED
■RABBIT HUTCHES SHOULD HAVE A SOLID BOTTOM. CHICKEN COOPS SHOULD BE CONSTRUCTED WITH THE WIRE BURIED AT LEAST ONE-FOOT UNDERGROUND AROUND THE PERIMETER OF THE COOP. DO NOT USE CHICKEN WIRE, A STRONGER GAUGE WIRE IS A NECESSITY IN PROTECTING YOUR SMALL ANIMALS.
■PICK FRUIT OFF TREES AS SOON AS IT RIPENS AND KEEP ROTTED FRUIT OFF THE GROUND.
■TRIM AND CLEAR NEAR GROUND LEVEL ANY SHRUBBERY THAT PROVIDES COVER FOR COYOTES OR PREY.
■ACTIVELY DISCOURAGE COYOTES WITH LOUD NOISES, FLASHING LIGHTS, RECORDED HUMAN VOICES SUCH AS A RADIO TALK SHOW, SCATTERED MOTH BALLS AND AMONIA-SOAKED RAGS.
■COYOTES ARE ATTRACTED TO AND CAN MATE WITH UNSPAYED OR UNNEUTERED DOGS. SPAY AND NEUTER YOUR DOGS.
■TRAPPING AND RELOCATING COYOTES IS INHUMANE AND ILLEGAL AND NOT A VIABLE ALTERNATIVE.
■EDUCATE YOUR NEIGHBORS: PASS THIS INFORMATION ALONG SINCE YOUR EFFORTS WILL BE FUTILE IF NEIGHBORS ARE PROVIDING FOOD AND SHELTER FOR COYOTES.

Sharon Albera @ James Chazer, that is exactly what I am afraid of. I will not even let my dog go out in the backyard at night because we have had to many sightings in West Winston Manor.

Vicky Vega shares ‘Coyote sighting this morning. Entrance to the 280 on Westborough. Yes, he got hit by the cars…..’
And Carole Brady-Duport shares this: Coyote sighting. Old Mission Road and Oak Street at 7:00 a.m.
We also rec’d another confirmation of the coyote that was hit up near Westborough. Thanks for the updates. -ESC

Jasmin Sutter So many coyote sightings lately, seems to be more then usual. sad that one was hit by a car.

Marie Carelli-Partney This makes me so sad!

Melissa Stieren Scott Are they building more houses in the hills where they live? I know in San Clemente where my cuz lives they have coyotes eating their cats and small dogs if left out, because they keep building more in the hills.