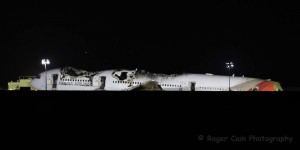 In light of Asiana Airlines Flight 214 crash upon landing at SFO, has this changed your thoughts/feelings about flying or about living under flight patterns? Here are some responses from our neighbors. Many agree flying out past the wreckage would most definitely have an eerie feeling, especially at night.

Janel M Chrestenson Pearson It only really bothers me when they come over so low that I can count the rivets. Then I worry.

Michelle Bissell Morgan Nope, and I will still fly

Mike Tambini No, when the man upstairs calls you no matter what you are doing then it’s time to go!

John Kevranian I like to know more about the pilot that will be flying the plane which I will be on!

Louie Zamboni I concur with Daniel Villa….Erik Cazares is a great pilot

Dan Anchick Fleet week is fun when fighters fly over my house.

Dan Anchick Just have to worry after the next one millionth landing at SFO.

Sharon Kay Gustilo Meyer Nothing has changed for me. I hear about more car accidents then I do with planes. Yes, I am still scared at take off and landing, but that will be no more than usual. Now if this kind of tragic event was more frequent (which I pray to God it doesn’t become so), then yes it would scare me. However, it looks like this was human error and thankfully, this kind of human error doesn’t happen all the time. Pilots get more training then drivers on the freeway. I get more anxiety on the freeway then I do in the air.

Donna Petersen Darling Nothing has changed for me I have plans forthis month and in September to fly. I don’t like to drive and don’t have the time to

Donna Petersen Darling spend traveling in a car. Look at the stats for auto accidents~

Randy Quok Flying is a lot safer than ground transportation.

Renee Gomes I would still fly. There are a lot more auto accidents and other type of accidents. So sad it had to happen.

Andrew Pink I have lived in San Mateo for 45 years. This is the first fatal accident at the airport. At this rate I will be 90 when the next one occurs. I will take my chances.

Bert Ramirez I graduated from South City in 68 and remember that in those days the take offs were MUCH louder!

Muriel Pleasic Peninger No. The only crash I remember is that little sesna going into the mud flats.That’s real good ithink. at least they can land in the mud if they don’t make the runway.

Annie MC The one comment that caught my attention was to wear your shoes (real shoes, not flip flops) during take off and landing. IN CASE of a crash, you will have protection on your feet! To climb over glass, metal shards, burning jet fuel, etc!

Kody Staubitz I think a good thing to do would be to post bios of the pilots connect to which flights they will be in command of and break down the pilots previous history/schooling etc. That way people can see whos hands they are really putting their lives in.

Betty Burciaga Erik Cazares graduated from SSFHS. From there he earned his aviation license at the top of his class.He became an air Marshall shortly after 9/11. He is a frequent patron of Maracas Bar and Grill in lovely down town Grand Ave. Erik is ranked 3rd worldwide on Fifa ’13 on the playstation network…..very dedicated man here.

Andrea Villa No….your chances of being in an automobile accident and being injured or killed are still more greater than an airplane crash.