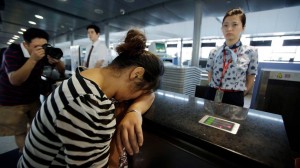 Do photos such as this bring value to the viewer or are they exploiting a person’s private moment of grief?

When is it reporting and when is it exploitation; that is the question we put before our readers along with this photo.  This picture has made the rounds through multiple media sites and it has had some upset that the media is so invasive. Yet others believe this is part of good reporting. Everything South City has learned this photo was actually taken in China and the woman grieving is a family member of a passenger on the fated Asiana Airlines Flight 214 that crash landed at SFO.

We further have learned that passengers and family have been taken in at the Crowne Plaza Hotel near the airport and we commend management and staff for taking extra precautions in shielding them from media and the public view.

Below are some of the comments from our neighbors and we ask you; Do you think the media, especially photographers, over step boundaries? Are pictures such as this one appropriate? Do they bring value to the viewer or are they exploiting a person’s private moment of grief?

Brian Cassidy never know… could end up being a Pulitzer

Jim Chazer Journalists serve their purpose at times. But this guy is a vulture. If I was there, I would have intervened.

Lesley Cassandras I just too much!

Angie Harris-Robinson I think she should have been left alone. It’s a very personal private moment. But I do understand that pictures like this help the viewer to “feel” the affect of what has happened.

Solo Taumoepeau the media has their objective to fulfill. to give news coverage to the masses. with that they need to understand that they have boundaries to keep. & being an abrasive journalist/photographer is a definite NO! Neglecting respect & integrity in their work just to make cash/fame the objective. This is why there is a stigma that they are all out to take the pullitzer shot.. but at what cost?

Colleen Marie Hendon Bless all affected and give them respect as you would want.

Shivaan Sharma THE media is overexposing this terrible event. THey just need to let the proper authorities handle the situation.

Dan Anchick Why would the mom or family member mourn at the ticket counter at the airport in front if the agent? The ticket agent they don’t help. Is this arrival area? Maybe this woman is mad cause flight is delayed. This could be set up.
I don’t think this person is at all a family member. I should go ask. Is this customs? News outlets got my head spinn’n

Paula Singer Yes, I think photographers overstep their bounds all the time…that’s how photo-journalism works. It is a little disgusting how vulture-like people become in these moments.

Mark Navarro They overstep thier boundaries big time,, but they have an audience that love to see others suffering..

Adrienne Soto Thats so sad all there thinking. About is a big pay check

Laura Alban Walsh Yes I do, and they need to leave these poor people alone.

Anita Porpoise Exploitation, it is for money and there are no limits.

Beth Wald Everything South City, how do you feel posting this picture?

Everything South City Hey Beth Wald – It was a tough call for sure. Personally it’s been difficult to watch media swarming folks at such a horrific time. We did not do it for $ or exploitation rather to get opinions from our neighbors. {ksw}

Angela De Benedetto It’s disgusting. Where’s the kind hand guiding her to a chair to sit? Where’s the person offering her some water? I think the woman behind the counter disturbs me the most of all. She is devoid of any emotion whatsoever.

Hector Anthony Tonarelli I’d would shove that camera up his

Michele Wilson As long as you have permission from the person you are photographing than all is well. Though from my experience, I’ve gotten reamed for doing so many a times ago. However, capturing a persons moment when they are not expecting it or are unaware that you are watching, can be breathtaking, and amazing, such as this photo.

Everardo Salazar They are exploiting a person’s private moment of grief!

Mark Thaler It’s disrespectful of one’s privacy, even if it’s not a “private” moment, at least let someone grieve to themselves until they’re able to regain their composure.

Nicki Lynn yes! it’s awful what happened but the way news crews are claiming they were the first on the scene and how they have better coverage than the next you’d think they were glad a tragedy has happened! i don’t mean it to sound that way, i’m a journalism major myself but lay off already! give these people a break. i am personally tired of getting breaking news updates about the most miniscule details of this crash. let’s move forward and let these people heal!!