HEY COYOTE and nature LOVERS! Check out this FREE film NEXT Thursday 7/11 starting at 6:30pm. Perfect timing as we continue to get more local reports of our 4 legged friends all around town. See you there!
Documentarian Melissa Peabody’s new film San Francisco: Still Wild at Heart will be shown on Thursday, July 11th, 6:30 pm at the South San Francisco Municipal Services Building (MSB), 33 Arroyo Drive. From South American parrots to coyotes, Peabody’s original footage depicts how coyotes and other  wild animals impact city ecosystems and how animals and humans are learning to co-exist in an urban environment.

Following the showing Peabody will talk about how making this film (and a shorter one specifically on coyotes) came about and what impact her film has made. Afterwards there will be a question and answer session with the documentarian.  Peabody is the executive producer and owner of Living World Films.  Her credits include Dolphins in Danger for Turner Broadcasting and an Animal Planet 13-part series Wyland’s Ocean World.

This free film showing (approximately one hour) is a collaborative program hosted by the South San Francisco Library and Parks & Recreation Departments.  The film will be shown in the Community Room of the MSB; no reservations will be taken.  For more information call (650) 829-3876. 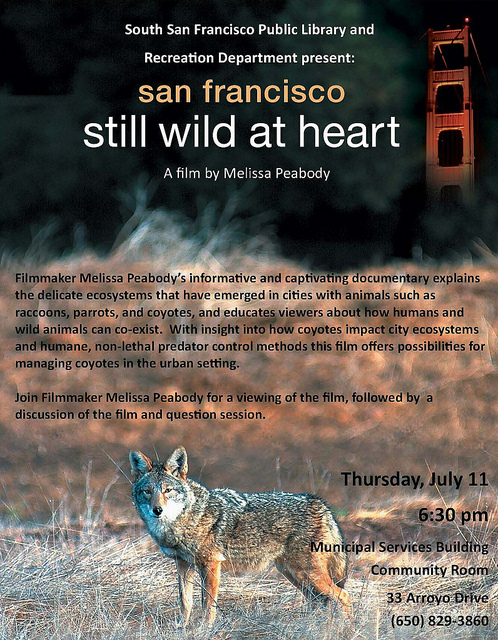