We’ve enjoyed some great pictures shared by our friends on our facebook page. Please feel free to share any that you may have. Lots of memories for us all! You can send them to EverythingSouthCity@gmail.com Thanks to everyone who does share!

We received many great photos from Robert Landucci as he shared “After my Father passed away I brought a lot of his stuff back here to Fresno. I found old Enterprise Journals my parents had saved because I was in them. I will post more here if you want.”

Jenny Ramsey My Mom saved some clippings of me from the Blue Knights and The Dance Club from high school. Here’s your 15 minutes of fame, so why not post them.

Everything South City to Robert Landucci Condolences on your Dad’s passing. We are so lucky our parents saved remnants of our childhood and of their life in South City. Yes, please do share, we all appreciate and benefit from it. We will use your shares on our website as well so they can be archived and kept for others to enjoy for a long time. Thank you.

Father Durkin and the Cottonwood Contingent 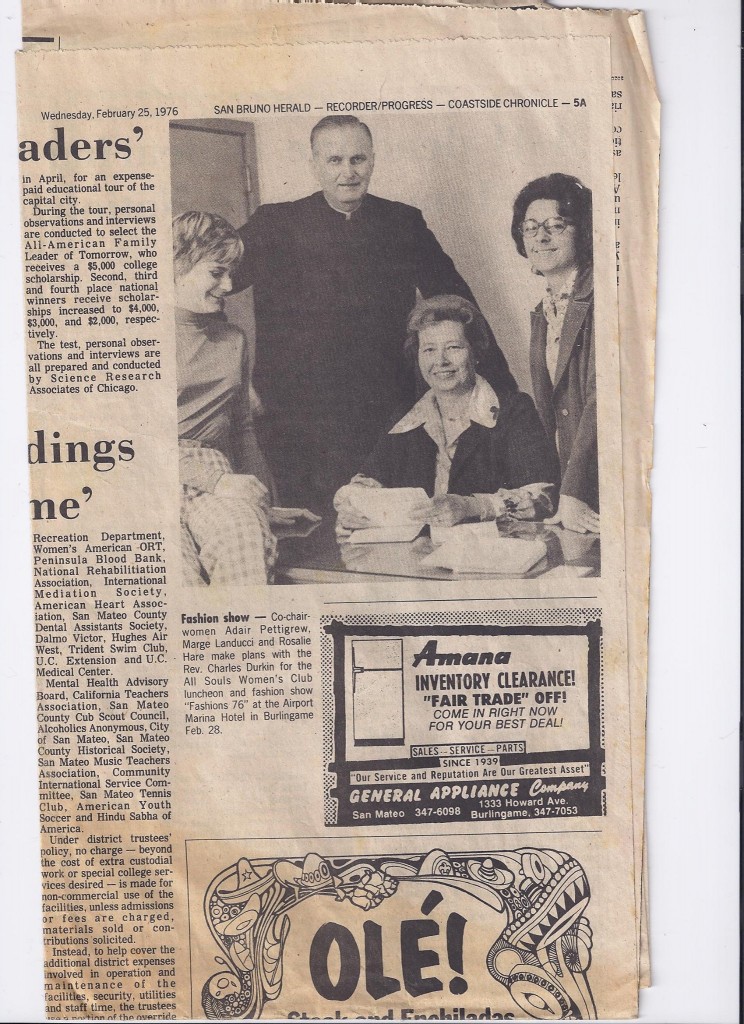 Father Durkin and the Cottonwood Contingent brought about this conversation:

Pam Christensen Fogliani I remember when this pic was taken with Father D, your Mom and Rosalie. Have so many fond memories of your Mom. We played canasta every Tuesday night. Me, your mom, Gerry M and Rosalie. So much fun. Thanks for posting.

Robert Landucci Wow! Hi Pam. She kept this in her scrapbook. I sent the original to Rosalie awhile back. I remember Canasta, she always looked forward to it. Interesting game. Good to hear from you. You look great. 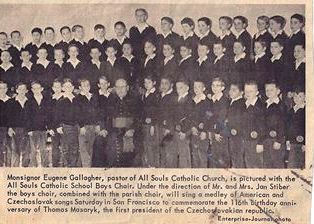 Who all remembers Monsignor Eugene Gallagher from All Souls?

Who remembers anyone in this line up?

Christopher Segura I attended All Souls in the 70’s so this is before my time. I think it was Father Durkin when I was there.

Theresa Di Falco Wow, I totally remember this!!! My brother, Mike is standing next to Joe Scott. They are the two unknowns next to Monsignor Galligher.

Fred Ponce Damn your getting old ….don’t you remember the gang that was in that picture ….Frank Caesar. Dave Galiotti al dunn kent Cunningham Kevin clap. Jim spingola. Dave Cox Kerry Brosnan marty cattaneo. And more. What about the girls. Back then I thought we had some of the best looking ladies. !!!!!!!

Frank L. Cassady The only thing I remember is Monsignor Tozzi. What a character he was. 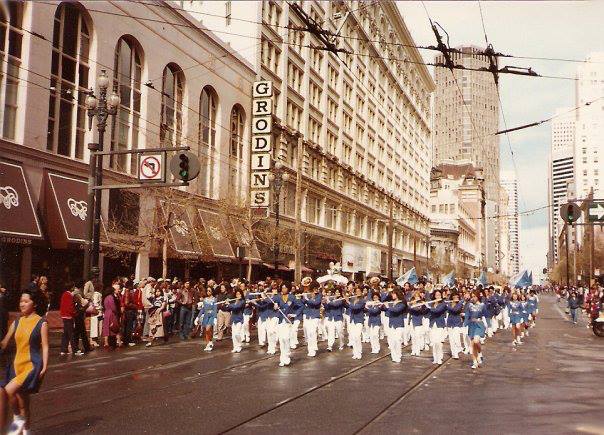 Robert Landucci What a great picture. Bought my first suit at Grodins.

Vicki Ottoboni I was in the class of 1982 Westborough marching band!!! Fun times!

More throw back Thursday as we remember our old Junior High School – Southwood! The school is now known as the Adult School on Southwood Drive.  Thanks to Eva Musante Castro for the share. Very cool, blast from the past! Mug that was sold the last year that Southwood Jr High existed. This photo brought about dozens of LIKES and comments below: 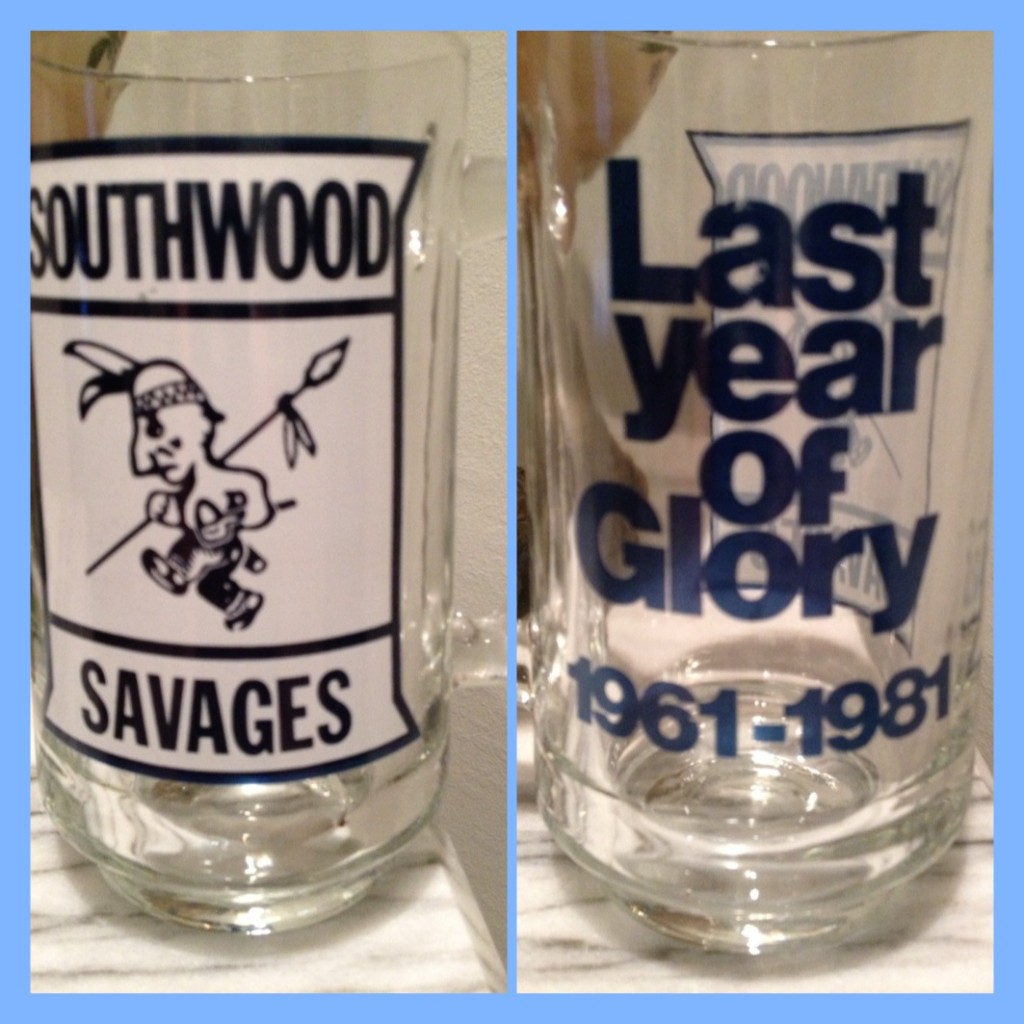 Everything South City Not to worry Jose Chavez,, good, bad, or indifferent, we all have a history. Welcome to South City’s!

Charles O’Neill-Desira BTW, everyone born in America is a native American.

Eva Musante to Castro Jose this is not meant to offend anyone, these pics, items, etc r just memories. I grow up in South City from 3rd grade til just a yr after high school n have so many GREAT memories living there n going to school at Los Cerritos, Southwood n South City. It was very sad to see Southwood close n we had been the last 8th grade class there, but the first 9th graders in high school… 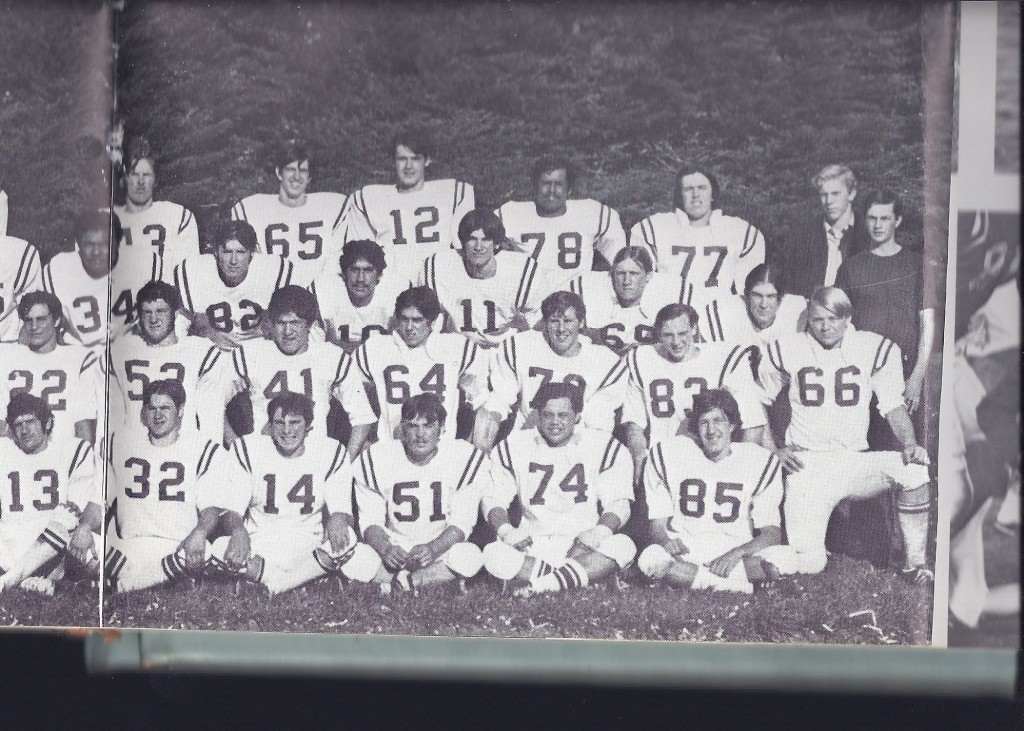 Jocelyn Cronin That is so awesome

Robert Landucci Do I look like Jeff Hughes Jocelyn? I don’t know who that is.

Jocelyn Cronin and sort of ;-))

Robert Landucci I just hope he was good looking J.

Robert Landucci To show you how politically incorrect we were back then, we called Steve NIP.

Robert Landucci The thing that stands out to me is how thin we all are. I umpire high school baseball down here and the kids at 18 outweigh us by 50 pounds. Did our parents not have money to feed us?

Cheryl McFall Hurney we played outside all day. we didn’t sit in front of ipads, computers and x boxes. big diff

Butch Woodman Bob where was this taken?

Robert Landucci Don’t mind my sister Cheryl everyone, she walks everyday and is older than me. You know Butch, I have been asked that question 3 times now. One of the younger guys on Coach B.B facebook page asked me where were the batting cages at O.P.? There were never batting cages at the park. I even asked Mr. Brian when Shaun and I were at his home 2 weeks ago. He did not know. I don’t remember, were these are home jersey’s or were the white jersey’s home. I am going to go out on a limb and say that the netting behind us are not batting cages.

Robert Landucci It sure looks like the Guy F. Atkinson building in the background. I think this picture was taken in the back of the park over by the tennis courts and the netting was for Tennis. Just a thought.

Jocelyn Cronin I recognized all them Brian but could not come up. Thanks

Brian McLean @Greg, South City didn’t have a girls baseball team like the one you played on at Terra Nova.

Greg Miles Too bad! they might of won more games than the boys.

Butch Woodman Bob, for some reason I think that pic was taken at Hillsdale High

Robert Landucci I trust you judgement on this, for no other reason than that I am at a loss.

Dino Fontana Hey Robert Landucci, I just emailed this photo to my co-worker Gene Montgomery, and he immediately started naming these guys.. lol

Robert Landucci I knew you were going to ask that. I was a Junior that year. Here it goes. Back row starting from your left. David Grimes, Gordon Miller, Butch Woodman, Me (I look better with no hair), Al Dunn, Ted Maynard, Dennis Collier (RIP), From the right side. Pat Carroll, Paul Bachtold, Rich Fonti, Steve Yamamoto, Jerry Anderson. Rocky Thaugerger, Gary Poli. He was a tough guy. Mr. Brian thought he would be a good player so he had him come out. He was Ok!

Robert Landucci Gene Montgomery was El Camino’s best players in 1975. Great guy, even better athlete. 1975, last game of the season, we are leading in the last inning when he starts off with a homerun to left, we all thought it was over but with runners on first and third someone bunted the ball in the air and we doubled the runner on first. Game over.

Robert Landucci Thanks for sharing that with him. I am going to post something later Dino. Send it over to Gene.

Theresa Di Falco I know a lot of guys. Bob was in my class.

Robert Landucci Hank Love was another great player Carla. A few years older than me but my Father coached him when he was a boy.

We also have the Historical Society Museum which may be a good home should anyone  ever want to part with their treasures.  Or go over and see all that is collected there and enjoy a good trip to yesteryear. They can be reached at smppa@comcast.net and this is from the website:
Chestnut Avenue Museum
80 Chestnut Avenue
South San Francisco, CA 94080
(650) 829-3825
Hours: Tues & Thurs 2 – 4 pm
Second & Fourth Sat 1 – 3 pm