The San Francisco-Oakland Bay Bridge will be closed in both directions Labor Day Weekend in order to take the original East Span out of service and to open the new East Span to traffic. The closure will begin Wednesday, August 28th at 8:00 PM and the new East Span is scheduled to open on Tuesday, September 3rd at 5:00 AM.

All arrival times are estimates.

ADDITIONAL INFO ON ALTERNATIVE ROUTES DURING BRIDGE CLOSURE FROM 511

If at all possible, avoid driving between the East Bay and San Francisco during the closure. Instead, take public transit, or try telecommuting. Several transit operators will provide enhanced or augmented services during the closure. Also, consider forming a carpool to take advantage of HOV lanes. 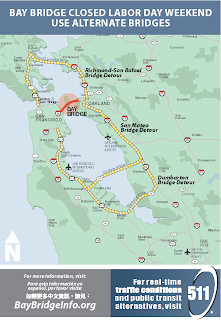 For those who must drive, get information on detour routes, current traffic conditions, bottlenecks and traffic delay information, I-80 access in San Francisco, and Treasure Island and Yerba Buena Island access, by clicking here.

During the 2013 Bay Bridge closure, a special Bike Shuttle service will be offered from Thursday, August 29th through Monday, September 2nd. Click here for more details.

What to Expect When Driving on the New Bridge

The new side-by-side bridge design will open up panoramic views of the San Francisco Bay and the East Bay hills. Motorists are urged to drive carefully, keep their eyes on the road, and let their passengers enjoy the picturesque ride.  Click on the images below to view drivethrough animations in the eastbound and westbound directions of the new Bay Bridge. (Please allow about 30 seconds for videos to load). 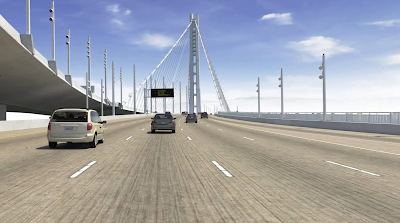 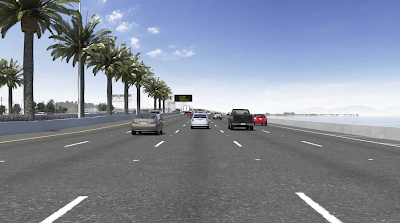