South San Francisco police department put out a media release stating Saturday August 3rd there would be more patrols out enforcing traffic laws particularly for motorcyclists. Their attention would also be on all drivers that might put motorcyclists in danger. The focus areas are chosen due to previous motorcycle accidents or known areas of concern. Everything South City asked our facebook readers what areas in town do they believe needs additional police attention and below is the conversation that took place.

SSFPD have their prime locations sussed out yet what would be your choice location(s) to help reduce bad driving or bad road design (parking lot entrances, signage needed, etc)

Brian Cassidy How about patrolling for crime and cleaning up the homeless that I’ve been seeing more of?

Michele Ferrario Burbano @ brian cassidy .We had a homeless vet outside of our salon for months. It took me 6 months to get him into the shelter for vets in RWC. He is now living in a low income housing in EPA. The cops need help they can only do so much the community needs to get involved.

Brian Cassidy Fair enough on the homeless… but we’d be better served with them patrolling around neighborhoods making their presence known and ending the day with no arrests rather than sitting on a corner waiting for speeders and writing 30 tickets, imo.

Michele Ferrario Burbano Agreed!! We need more cops on the Peninsula the population is growing and a lot more crimes.

Everything South City Brian Cassidy -this issue of homelessness recently came before our city council after a 1 yr Task Force had been set up to identify problems and potential solutions info HERE and city council minutes can be found HERE (just an fyi bc it is an important issue. Txs!)

Sharon Kay Gustilo Meyer Hillside near Terra Bay… but I actually think that they are out there right now.

Jim Chazer Hickey at El Camino!! So tired of idiots driving down Hickey in the left lane and then, where the two lanes become four lanes, think they should be in the second lane from the right. DUMB people. Must have been in 50 close calls.

William Berndt Flipping u turns on grand down town.

Victoria Neri-Chin Seems like everyone is in a rush to get to Costco from the 280 Hickey exit to El Camino Real. If you wanna come into our city to shop please don’t run me off the road or tailgate me. I live a block away from Costco but work in SF. Its stressful coming home

Janel M Chrestenson Pearson Avalon Drive, Valencia Drive and Ponderosa. Once school starts those moms get out of control. They don’t know what “STOP” on the red sign means. Tag a few and word will get out. They will get the message – I hope.

JoAnn Willis Shannon Dr. in West. School is starting next week and they race down Shannon to get to Mon. Ver. HELP

Greg Rogers All of the above

Charles Esqueda pd in so city should patrol maple ave 700 block they wiz through there and drive on the wrong side two lane street.

Owen Molloy How about Cypress or suzzie way Daaa!!

Bambi Flintrock Just proves SSF PD are bullies they dont like motorcycles and are trying to harass everyone that Loves to ride they are so stupid putting all your money in the wrong place ! 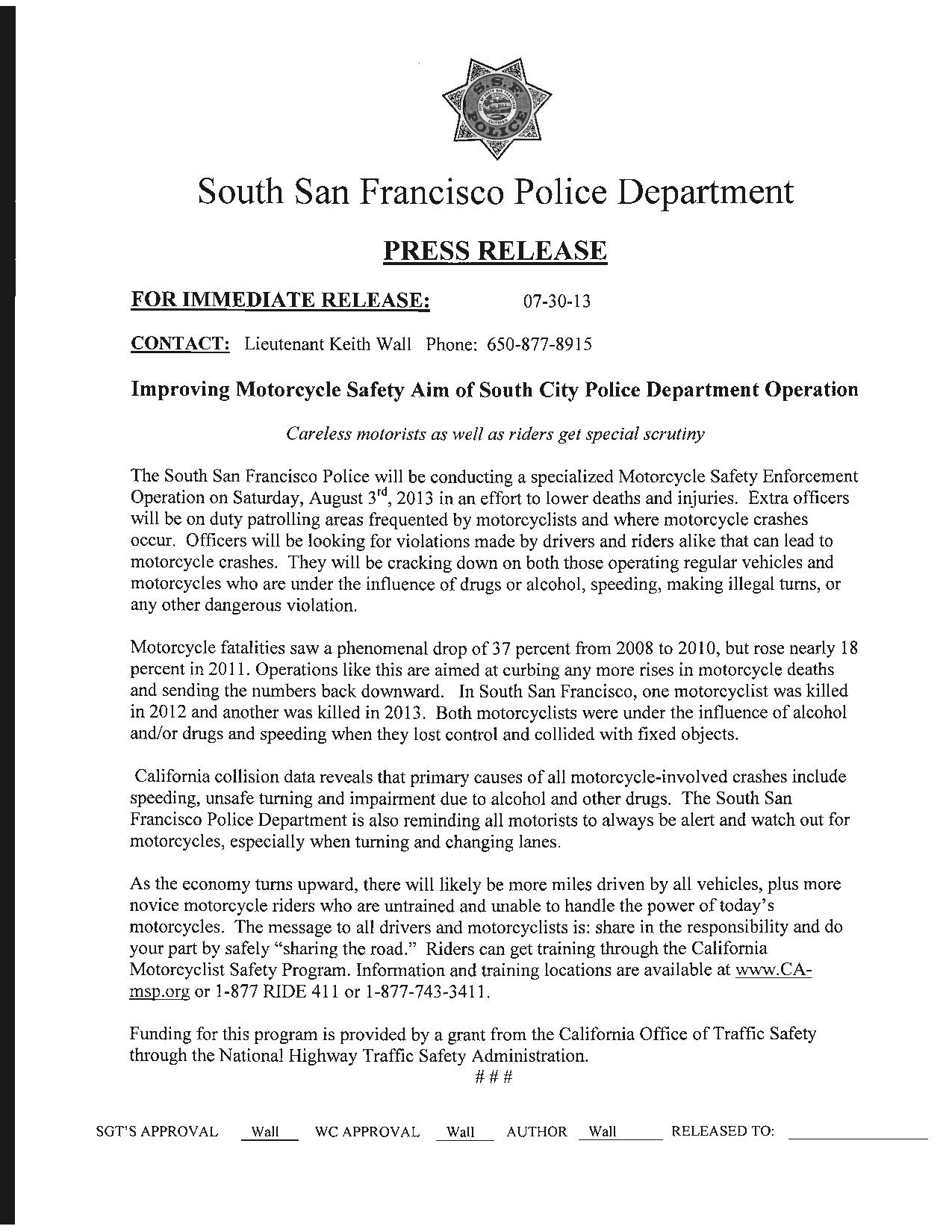