Direct from their community;

This is an amazing video, 22 minutes long, interviewing folks who have been working this beast;  firefighters, Red Cross, Lions Club, and everyday people. It is incredible to see such an outpouring of help and such an outpouring of gratitude. Sometimes in the world we live in, the news we see, we can become disillusioned by mankind. Watch this video and be lifted. We continue to keep good thoughts that this inferno become fully contained, and soon. And those working in these rugged conditions carry on safely.  Watch video HERE

This is a short documentary that a few of us put together about the CA “rim” fire. It focuses primarily on the impact of our community of Tuolumne County.

This is RAW footage and RAW audio in that I was trying to get this out within 24 hours to the people in the midst of the fire. So bare with me, after the fire is resolved I will color grade it and send my audio off to be mixed and mastered. I apologize! -Midview Studios 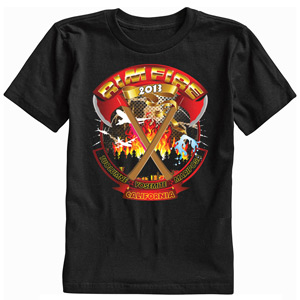 In addition folks up in Groveland have designed items to be sold with the net proceeds going to help restore the forest as well as the Fireman’s Fund.  T-Shirts are $20 each with sizes Adult Small – Adult 3X and more information can be found HERE

Because the area depends so heavily on the tourist industry which has been cut short, many local small businesses are hurting. Bad. We are working to get information on how we can purchase items online so we can help support them during this time of need. More info HERE

“We are always ready.” Airmen from the 129th RQW remain on standby at the fire operations stagging area waiting for their next round with #RimFire. (Photo courtesy of SrA John Pharr, 129th Public Affairs)
Here’s the 129th RQW’s latest numbers from when we first joined the fight:
Buckets/gallons dropped: 457 buckets/ 210892 gallons
Hours flown: 86.7
Sorties Flown: 73 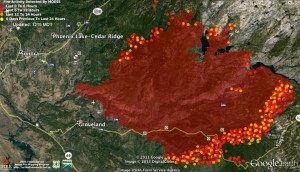 To see more of his maps go HERE 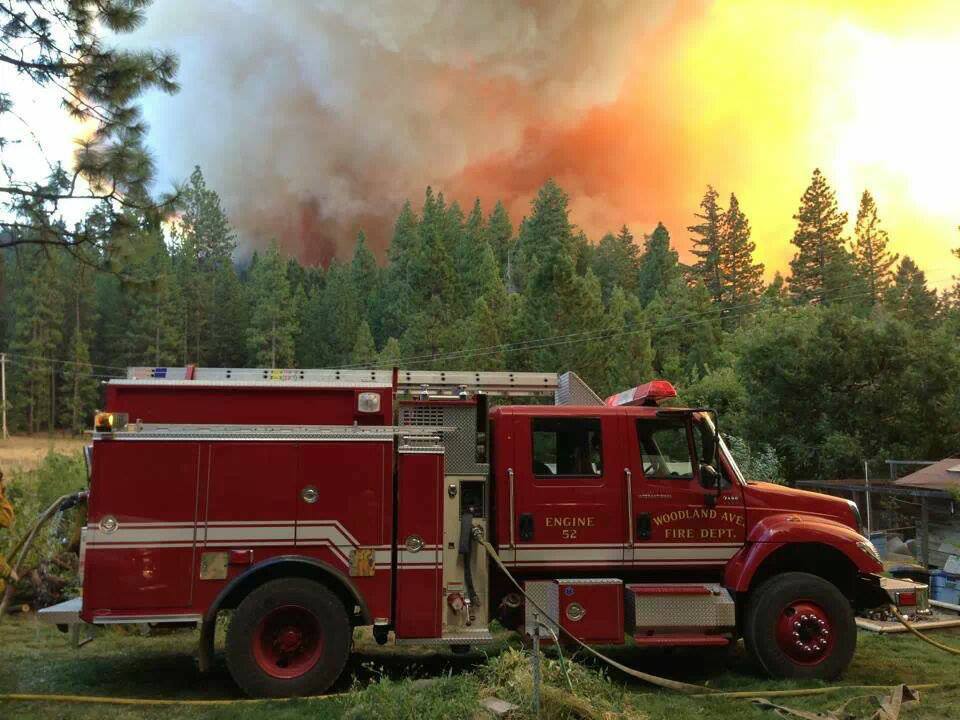 This a picture of Woodland Ave Volunteer Fire Dept. Part of XST4202C with Turlock Rural, Ceres, Modesto, and West Stan some of them been there since 8-20. Want to send a big thank you some of these guys left their crops and businesses behind to help others along with the other 2 strike teams from Stanislaus County huge thank you and come home safe
Photo: Anonymous by choice

Fire Update
Last night a spot fire crossed Old Yosemite Road, prompting an expansion of the Mandatory Evacuation in Mariposa County. Crews burned south from Hetch Hetchy toward Harden Lake on the eastern flank. Crews continued structure defense in the Highway 108 and 120 corridors, and around Cherry Lake. Today’s operations will included actions to control the spot fire south of Old Yosemite Road. Crews will also begin a burning operation from Duckwall Mountain north to Fahey Meadow along Forest Road 3N07and will continue a burning operation in Yosemite National Park near Harden Lake and south to White Wolf and to Tioga Road. Aircraft will continue to support burning operations.

Evacuations and Advisories
The Mariposa County Sherriff has expanded the Mandatory Evacuation along Old Yosemite Road to include areas North and South of Bull Creek Road to Little Grizzly Mountain. The Tuolumne County Sheriff’s Department on Thursday lifted the evacuation advisory for Tuolumne City, Soulsbyville and Willow Springs. The evacuation advisory remains in effect for Ponderosa Hills and areas east, along the south side of Highway 108 up to Pinecrest. An Evacuation Warning has been issued for all residences of Bondurant Mine Road, Texas Hill Road, and Wampum Hill. Highway 120 at the Yosemite National Park boundary west to Buck Meadows has been evacuated. Evacuation centers are at the Mother Lode Fairgrounds in Sonora and at the Greeley Hill Community Center.

Due to inaccessible steep terrain and extreme fire behavior suppression efforts on active portions of the fire are being significantly challenged. Heavy reliance on aviation resources has been critical in an effort to slow the fire’s progress to allow suppression resources to establish indirect control lines in areas where accessibility and safety can be achieved. The availability of heavy aircraft is pertinent to the success of suppression efforts.

Continued warmer and drier weather is forecasted for the next several days, which will elevate control concerns and slow burnout progress. Remotely piloted aircraft is providing realtime visual and infrared intelligence on the fire. Continued unified command with CAL FIRE.

Ordered 2 t-shirts a out 3 weeks ago, would like to check on order status. Can you help?

Hi JC It appears they have sold out and shirts are now on back order. For more information go directly to chris@sabredesign.com to see what to do next.

‘Due to high demand, we’ve had to order additional shirts and hoodies. So there is a backorder of approximately 2 to 3 weeks. Until then, we are continuing to fulfill orders with available items still in stock. Please put in the NOTES section if you’d like a partial shipment made if something might be on backorder.’

Just a little confused! How is shopping on-line for these products being sold through a non-profit agency helping the local small business.

Hello and thank you for your great question. And apologies for any confusion.

The T-shirts are being sold through the non-profit with proceeds to go to restoration of the areas burnt out.

In addition, we (ESC) hope to find businesses up in that area that may sell online, and if possible, promote them to help them re-gain some of the lost business they have suffered due to the fire.

WOW! It is incredible what the reach of social media has become. I am honored to have been part of these connections between South City and Groveland. Thank you for a fantastic post. I know all of Groveland hope you will help by shopping on line, but even more, by coming! Either to Groveland as the destination itself or through Groveland on your way to Yosemite. A night stay, a dinner, a stroll, a beer at that bar… It all helps to get the little town of Groveland back on its feet.