Vacant positions across the board

This November we will have a very full local ballot as South San Francisco continues to see some major changes to our leadership.  Pay attention as this will have an impact on everyone who lives and works here.

As many know, our city staff has made some recent changes with more on the horizon. Our Fire Chief Phil White has retired leaving a vacant position. Police Chief Mike Massoni has had a change in title and position from Chief of Police to Public Safety Chief, now covering both departments; police and fire. Massoni is also looking towards retirement in the next year or two.

Our city manager, Barry Nagel, is leaving us as he sets to retire. In addition Susan Kennedy, who has worn more hats in our city than most, will also follow the retirement train. And our Director of Public Works, Terry White, is also set to retire.

Last December our city suffered a big loss when Dick Battaglia passed on, he was our City Treasurer in addition to all the other civic responsibilities he held through the years.  Frank Rizzo was then appointed by our city council to take on the role of City Treasurer and has filed, and qualified, for this November ‘s election. He is running as an appointed incumbent.

Our city clerk, Krista Martinelli, has completed another 4 year term and has filed, and qualified, for a run at another 4 years. Both Rizzo and Martinelli are running unopposed.

Regarding our city council, Kevin Mullin won his re-election bid for council in 2011 and having served one year, he was then voted in as our State Assemblyman, leaving 3 years on his term here with us. The city council appointed Pradeep Gupta to one year of that term, with a ‘special election’ this November to fill the 2 year balance on this seat.  In addition there are three seats on our council open for the 4 year term. 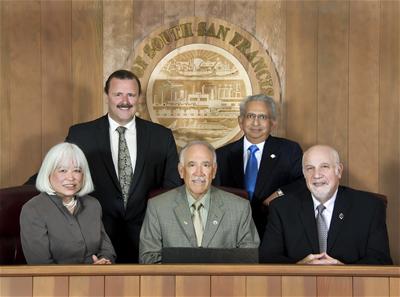 4 of these 5 council seats are open on this upcoming ballot. Councilmember Garbarino’s term expires in 2015

It is to the benefit of our residents to pay attention to this year’s election, not to the sound bites, but to the foundation and vision our candidates offer. Never have we had 4 of our 5 seats open at one time on the ballot, along with City Treasurer and City Clerk. This on top of the changes in our top management of our major departments. To say this is an important election really is an understatement.

Those who are interested in becoming a candidate must first ‘pull papers’ from the city clerk’s office. These papers include nomination papers. Upon completion of these papers they are then ‘filed’ at the clerk’s office. The clerk then confirms the information on the forms, including those who signed the nomination papers. Upon approval the applicant has ‘qualified’ as being a candidate and they can continue with their campaign.

The filing deadline is this Wednesday August 14 at 5pm.

This is the breakdown offered today by our City Clerk Krista Martinelli. A list of the individuals that have pulled papers for each of the respective offices is set forth below.  Individuals whose names are starred have already qualified for the ballot.

In review- our November ballot will be seeking:

The governing body of South San Francisco is the City Council which establishes local law and policies through enactment of ordinances and resolutions. The Council also determines how the City shall obtain and spend funds, appoints members to all advisory municipal activities, and represents the City by serving on Regional and County committees/boards whose policies may impact South San Francisco (i.e. ABAG, MTC). The Council provides direction for the City Manager and sits as the Redevelopment Agency Board of Directors. The Council positions are salaried.

Five members are elected to four-year terms. Elections are held in odd numbered years: three members at one election and two members at the next election. During non-election years the Council selects members of its body to be Mayor and Vice Mayor at the first Council meeting in November. During election years, the Mayor and the Vice-Mayor are selected, by the body, after the election results have been tabulated. Source: City Website

Everything South City will be following this election closely. Please let us know what questions you may have, for the candidates, as well as for the general election process. Qualified candidates for the November 2013 election will be posted Wednesday evening.

[…] Department and our city has began seeking a new hire for later this summer. Massoni has been our Public Safety Chief covering both the Police and Fire Departments since Chief Phil White retired last year  from the […]

A closer look at who stands to benefit most and who is pushing for acquisition of the property should be the first order of business. Naturally people who live in the immediate area benefit the most and want to preserve the open space for their benefit, I personally don’t know anyone who uses the area for recreation. Should the city and it’s residents allocate such a presumably large portion of available funds to benefit a small number of people? Much more research and public discussion/disclosure must be the first step before any proposals are put forth.

Given the state of many parks, schools, lack of recreational facilities, and programs I and many others would not support any large land purchase while quality of life services for the majority of families are not addressed first. When families have to use neighboring cities summer programs, schools, and other recreational facilities/programs because there aren’t enough within our own city, any proposals to divert funds which could be used to address these deficiencies are premature.

If this is a response to my Sign Hill post I know people who use the area. Not for just open space, this area has habitat for endangered species plus rare large tracks of native plants. The area is part of a mandatory Habitat Conservation Plan which limits building A large sentiment of many SSF residents is that they don’t want all open space built upon. This area has been open forever.

Have you been up there? It’s a very special area. Love to arrange a hike for you! It’s nice spending time outside on open spaces like this.
Thanks for making me think a little deeper about this.

South S.F. Has a chance to make the acquisition of property of No. Sign Hill an issue this campaign. What could be a better investment in SSF than obtaining this open space in perpetuity containing endangered species habitat and rare stands of native flowers. I understand the city has the funds saved to do so.

There’s certainly work involved to complete these tasks, but with city staff, Council, and community support it could be easier than you think.

SSF and San Bruno Mountainwatch, including the old Save San Bruno Mountain, has a rich legacy of struggle to keep our hills open as they could be with the political climate of the time. There were successes and failures to be sure, but without that effort there would be much more housing on the South Slope (Terra Bay). With that ‘community support’ of old we can sew up this precious open space for all to enjoy for generations to come! Who wants to help?

The final list of qualified candidates for the 2013 election is set forth below.