The Rim Fire Incident Command has released the following “Fact Sheet” for the fire:

States that have sent firefighters or other personnel: 44 and the District of Columbia

Cal Fire geographical units that have sent personnel: 20 of 21

Inmate personnel from the California Department of Corrections and Rehabilitation: 746
Proportion of inmate personnel working on the fire: 17.1 percent

Rim Fire acres as a proportion of burned acres in California:
47.8 percent

Size of the fire area:
More than five times the size of Washington, D.C.

Origin of Rim Fire name: The fire started near a scenic overlook in Stanislaus National Forest called “Rim of the World” 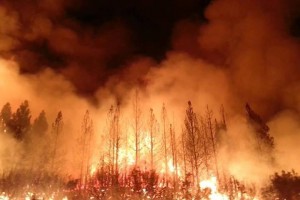 This image shows old, tall trees in the Yosemite area at the mercy of the Rim Fire. Although that fire is finally approaching the point of being under control, it will leave a legacy that needs to be dealt with for a long time. The worst part of that legacy is that the fire did not need to happen.

As many have pointed out, fire can be a healthy thing in the American west. Many plants are able to germinate after fires pass through, and fires clear out underbrush allowing the forests to regrow. That’s the kind of fire these areas need.

However, the rim fire was something else, as illustrated by this photo; the rim fire is a fire type known as a crown fire, a fire that burns trees all the way to the top. A normal fire regenerates the forest but spares many of the trees by burning underneath them; a crown fire is an out of control blaze which is so hot and so large that it kills the trees by burning all the way to the top. In the case of a crown fire, it can take years to decades for forests to recover while a normal brush fire is a small event that actually makes the forest stronger.

A crown fire is a forest-killer. It’s the kind of fire you want to avoid, and it’s the kind of fire we’ve seen in the last few weeks. The Rim Fire has now burned almost a thousand square kilometers of area (368 square miles, 235,000 acres) and in the next few days will probably become the 3rd largest wildfire by area in California history. It burned all the way up to the south shore of the Hetch Hetchy reservoir and will leave a scar on the northern fringes of Yosemite National Park that will take years to heal.

Perhaps the saddest part of this story was published last weekend. This fire, at least this enormous forest-killer didn’t need to happen.

The U.S. government used to fund significant efforts to prevent wildfires; clearing brush and setting small fires in areas so that large, out-of-control blazes would be less likely. But, the budget for that program has been hacked by nearly 50% over the past couple years and will likely be cut even further this year to pay for firefighting.

In 2012, the U.S. Forest Service approved a plan to clear brush and burn controlled areas over 65 square kilometers (25 square miles, ~9000 acres) in the Stanislaus National Forest just outside of Yosemite. The 8 sites that were selected were some of the exact areas that burned early in this fire and helped it grow completely out of control.

Previous experiences in California have shown that these fire control efforts work. There have been several historic examples of large fires burning up to the boundary of an area cleared of brush a few years earlier and stopping almost right at that boundary because the fuel is used up beyond that point.

Those projects were approved in 2012 by the Forest Service but they never happened. There simply wasn’t enough money to do it. The last several years the firefighting budget at the federal level has been insufficient to cover the costs of fighting fires out west, and the money to finish the year has come from shutting down prevention efforts.

For comparison, the cut in fire prevention funding from the U.S. Federal Government from 2012 to 2013 was $208 million. The money spent fighting this one fire is already 1/3 of the amount cut from the fire prevention program over the last year, and it has burned through areas that should have been cleared but weren’t.

This fire shouldn’t have happened. The Forest Service wanted to do their job, but there is no money to prevent fires, only to fight them, despite the fact that preventing them is cheaper and helps avoid the formation of crown fires that can devastate a forest. 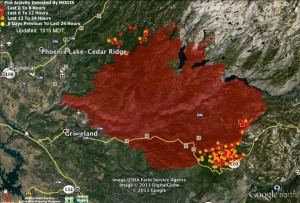 days. There is a large area of unburned fuel between the edge of the fire and the completed containment line that needs to be dealt with.’  Lisa Askew GROVELAND