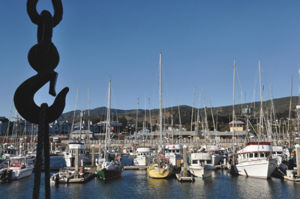 Coastside residents complained that the action violated a longstanding promise to return the district headquarters to Pillar Point Harbor.

The San Mateo County Harbor District will stay in its temporary administrative offices in South San Francisco for three more years following the board’s decision on Oct. 2 to renew its rental lease. The vote was 4-1.

A large contingent of Coastside residents was on hand to complain. They said the action violated a longstanding promise to return the district headquarters to Pillar Point Harbor.

Reviewing the district office lease for a second time, the Harbor Commission majority explained it lacked a suitable alternative to relocate to on the Coastside. Harbor officials reviewed eight options for office space on both sides of the Peninsula but none of the sites could accommodate the district with the right space for a good price.

“I don’t see any new information here that says we definitely have something different or better than what we have now,” said Commissioner William Holsinger. “Long term, I think the district office should be on the Coastside. That’s our home, and that’s where we belong.”

“Eventually we want to come back to the Coastside,” added board Chairman Robert Bernardo. “Absent a clear solution, I’m not ready to move anywhere.”

Bernardo and Holsinger were joined in the decision by Jim Tucker and Pietro Parravano, two long-serving board members who voted back in 2004 to relocate the offices to South San Francisco.

Before the move, nearly all harbor staff worked out of the current harbormaster’s office at Pillar Point Harbor. The district decided to move because, officials said, the space had become too small. The district leased a 3,670-square-foot space near Oyster Point Harbor, with the plan to move back into a permanent office on the Coastside by 2009.

Since that time, harbor officials have made almost no progress on transitioning back to the coast, said Midcoast Community Councilwoman Lisa Ketcham.

“The maximum of five years of rented office space has now become 10 years, and we’re no closer to a district-owned facility,” she said. “A lot of time and money has been spent on consultants, planning and permitting for harbor district projects with nothing to show for it.”

Many critics questioned whether district staff made a sincere effort to search for office space on the Coastside. At a September meeting, district General Manager Peter Grenell strongly urged the harbor board to immediately renew the lease. He originally reported to the board that the only comparable office available on the coast was a building near the Half Moon Bay Golf Links. He disparaged other sites on the Peninsula because they were not “Class A” office space, but he later admitted that he didn’t know what the term signified.

Grenell warned that relocating the staff would disrupt operations and cost $60,000 in moving expenses. Public speakers and commissioners indicated that amount seemed high. To explain how he arrived at that number, Grenell reported he based the figure on the district’s 2004 moving costs — $47,000 — and adjusted for inflation.

“It was a real number at a real point in time, adjusted by the (consumer price index). It’s not an unreasonable estimate,” Grenell said. “I’m not convinced that one could find a more reasonable moving cost.”

At the meeting, Grenell provided a breakdown of the 2004 move, but the actual total listed was only $43,000. About $17,400 resulted from buying and assembling furniture, and $23,000 from installing computer and phone systems. Only $2,500 of that expense came from actual moving costs.

Other questions were also noted between Grenell’s two staff reports. Available office spaces on the Coastside at the Harbor Village mall were quoted to be $2.50 per square foot, but rental ads for the space listed it at $1 per square foot. Commissioner Sabrina Brennan questioned the math in the report, saying there were different numbers being thrown out on the current office rents. She pointed out the cost per square foot in Grenell’s report didn’t match the monthly rents he was quoting. For example, Grenell reported the district was currently paying $7,717.50 for a 3,650-square-foot office. He noted this rate was $2.01 per square foot, but it would actually add up to $2.11 per foot.

In his second report, Grenell examined six different office spaces on the Coastside, but he returned to his original suggestion that his staff should remain in South San Francisco. He noted the district would get its rent lowered slightly to $7,350 per month. After that slight drop, rents would swing up in later years, rising to $7,797 a month.

Brennan and public speakers indicated there was an opportunity for bigger savings if the district downsized to a smaller space. Multiple speakers questioned why the district needed more than 3,600 square feet of space when it had only six administrative employees.

“We haven’t taken this item seriously, given how much we’re spending on this per month,” Brennan said. “It feels like, from the comments, that the board is not serious about investigating our options.”

Brennan chided her fellow board members for assuming Grenell’s recommendation was the best option. She pointed out the general manager didn’t follow her request to bring the district’s real estate agent to take questions on their options. At her request, local Realtor Dave Worden presented an office space in El Granada to lease or buy.

Instead, Commissioner Jim Tucker made a motion to extend the harbor district’s lease by three years, adding that the district should investigate breaking this up into three one-year leases.