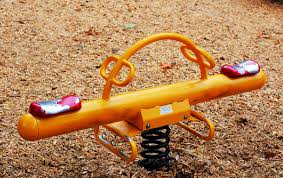 A new neighbor in town wrote to Everything South City inquiring if we had any local parks with teeter- totters. We put the question to our Facebook friends and ask if anyone else has suggestions.

“I have a question.  I have a four year old daughter asking if  I could take her to a park with a seesaw.” our new neighbor wrote, ” I’m thinking I haven’t seen a park with a teeter totter we recently just moved here from Chicago. Any suggestions?”

Everything South City Thanks for hook ups, question came out wrong! Where can we find a local teeter totter?

Robert Estrada I have heard that they are now considered a high risk element to playgrounds and are thereby less common.

Janel M Chrestenson Pearson We still got it right!

Michelle Bissell Morgan The simple things are the sweetest K

Lisa McKay Gellert Park used to have one.. maybe check there.. It is in Daly City but not too far..

Vanessa Flores Gellert park in Daly city has one. Was there about 2 weeks ago.

Ashley Hope I have one across the street from me. Daly City midway drive

Amber Lynn Keller Selic park has one, and I think Avalon too..

Gayathriedevi Janakiraman Yes, check out local parks and due to safety reasons, they have eliminated a lot of them. Hope you find one for her to enjoy!

Muriel Pleasic Peninger I don’t think they have them anymore. To dangerous ,many parents don’t watch their children and to many accidents its too unfortunate.

Robert Guinasso Born and raised in So. City. Recently went back to visit and when I checked to see if the old park (WITH ENCLOSED playground ) at the bottom of Zamora was still there to my surprise it was. Basketball courts were gone. Grass field instead

JoAnn Willis I think most have been taken down because they are dangerous.