Members of the Winston Manor Community Association have been tracking the funds used from the Measure J coffers and cry FOUL.  For the past two years the group has worked with both the SSFUSD Board and the SSFUSD Citizens Bond Oversight Committee and still have not received valid answers to the questions they continue to bring up.

WMCA  Boardmember Marty Romero sits on the SSFUSD Citizens Bond Oversight Committee and has been frustrated that the CBOC has basically rubber stamped approvals as they come before the committee after the fact.  “My background is finance” Romero explains “This bond money should never have gone to finance the solar project,  which will divert Measure J funds  into the general fund. Bank of America has financed many of these projects done by Chevron. We want to know why alternative financing was not sought by SSFUSD or the CBOC. ”

At issue is the fact Measure J funds were sold to voters as necessary to construct or renovate existing brick and mortar buildings. The $162 million dollar bond will take 40 years for taxpayers to pay off yet the solar panels are said to have a life expectancy of only 20 years.  There should be a savings of $20 Million from the district electricity bills and that money will be used for administration which violates the intent of this measure.  In addition, who will pay for replacement or repairs of the solar panels as they come to the end of use?

To bring more concern over possible mismanagement of Measure J funds, WMCA sites Swinerton (the agency overseeing the projects) as stating this current bond money is being used to close out incomplete projects that were to be done with the previous bond monies from Measure C – over 50 projects.

The Winston Manor Community Association is the city’s largest and most active neighborhood association with over 550 households participating and have been key in bringing attention to issues that would other wise go unnoticed by the general public. When they speak up you know there is something of importance that needs to be followed.

The below correspondence from WMCA to SSFUSD and to the community, along with a letter from SSFUSD Superintendent Hogan, explains the situation in more depth.  The group is suggesting the SSFUSD re-finance the Chevron Energy Solution Power Project (CES) through  alternative avenues such as Bank Of America.

Recently San Jose College District came under fire for using a ‘Bait & Switch’ with a bond that had been approved for specific items yet was used for projects not listed when the bond was sold to voters.  The Superintendent in that case said there is a wide area of interpretation when it comes to how a district will spend the money.  While she may feel that is OK, there are questions of legalities which still need to be answered.

With today’s anger at the federal government shut down and pending debt ceiling crisis, voters and taxpayers demand more transparency starting with small town issues. Be assured this will be something the Winston Manor Community Association will pursue. “We have city council elections coming up” Cindy Alger, President of the WMCA explains “We have some members of the Oversight Committee and the School Board running for election. We have to question how they will handle city funds when they have not been good stewards of our school monies that taxpayers must pay off.”

The WMCA is asking that the CES be re-financed through alternative lending institutions, such as Bank of America, as they have financed other CES municipal projects through out the United States. Baring that, they believe the district has a responsibility to see realized savings secured in a restricted account to be used for maintenance and improvements to the schools, including future repair and/ or replacement of the solar project.

During the  September 12, 2013 SSFUSD meeting WMCA Boardmember Anna Nastari read the May 15, 2013 WMCA letter addressed to SSFUSD to be sure it became part of the official records. That meeting can be viewed  HERE

SSFUSD meetings can be viewed online at the city website HERE .  To read the language of Measure J click HERE 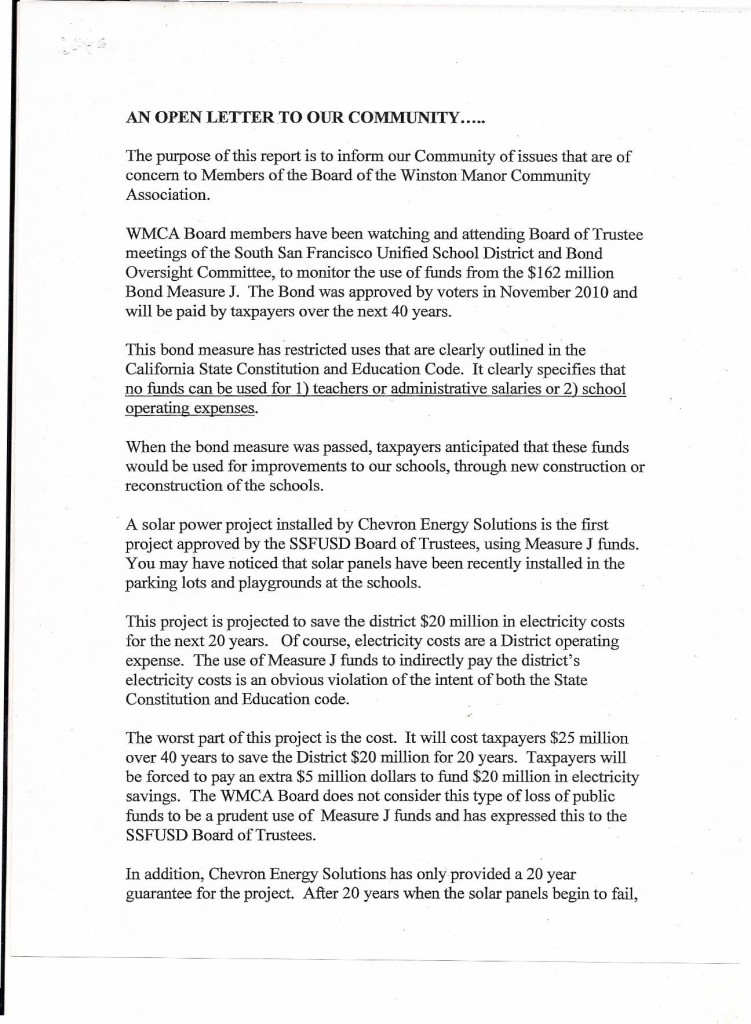 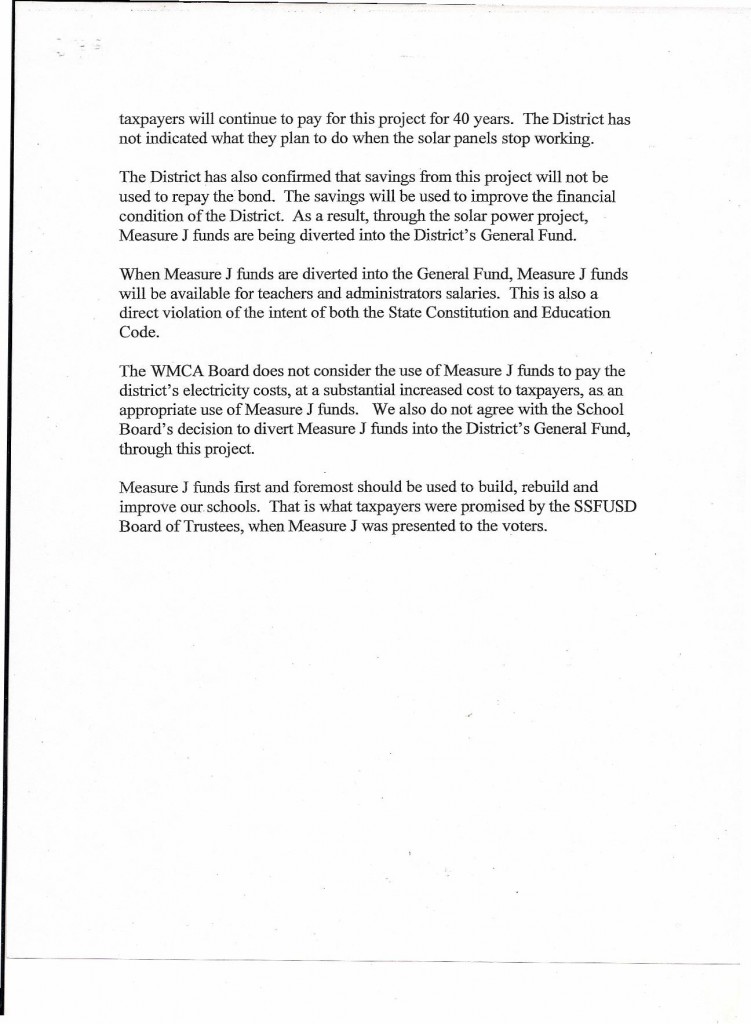 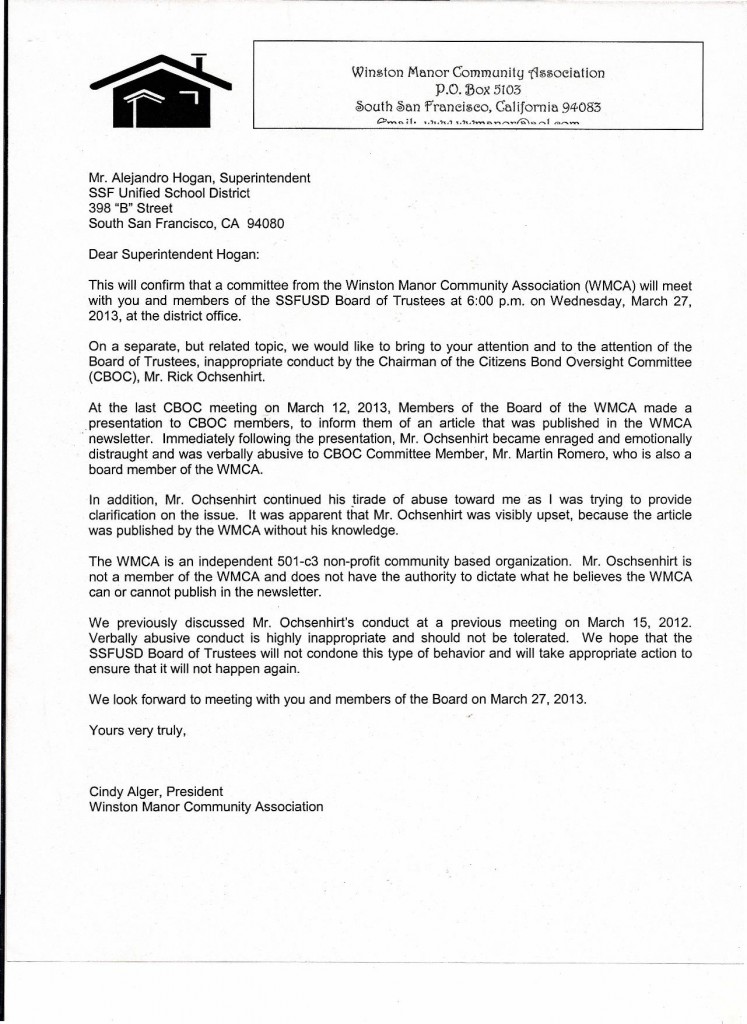 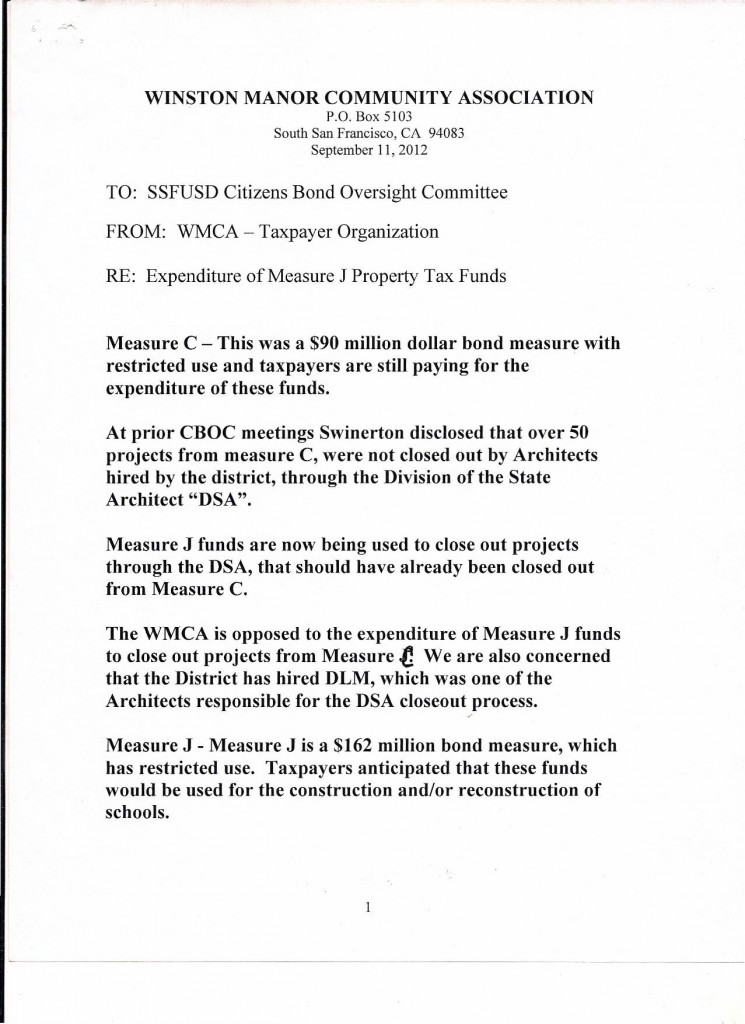 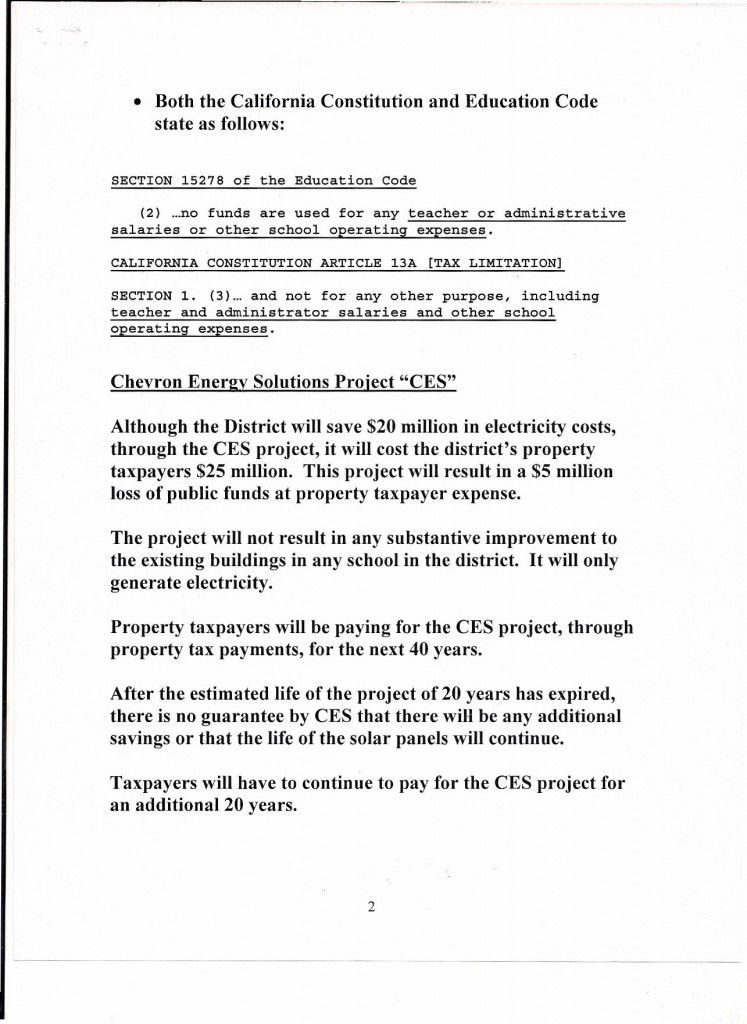 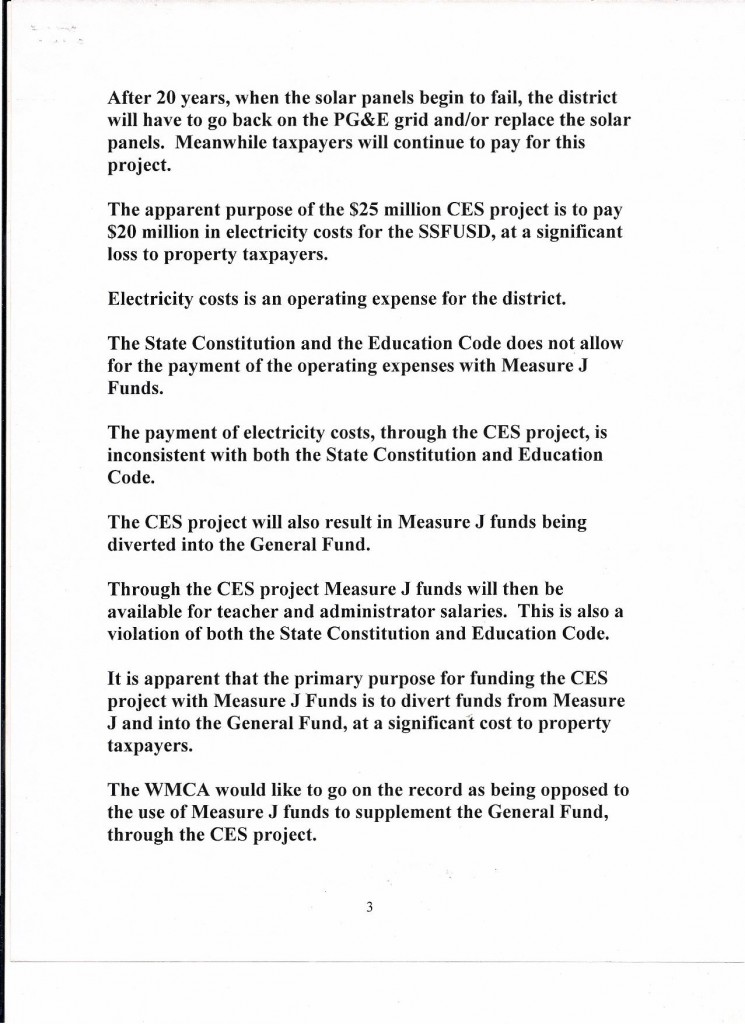 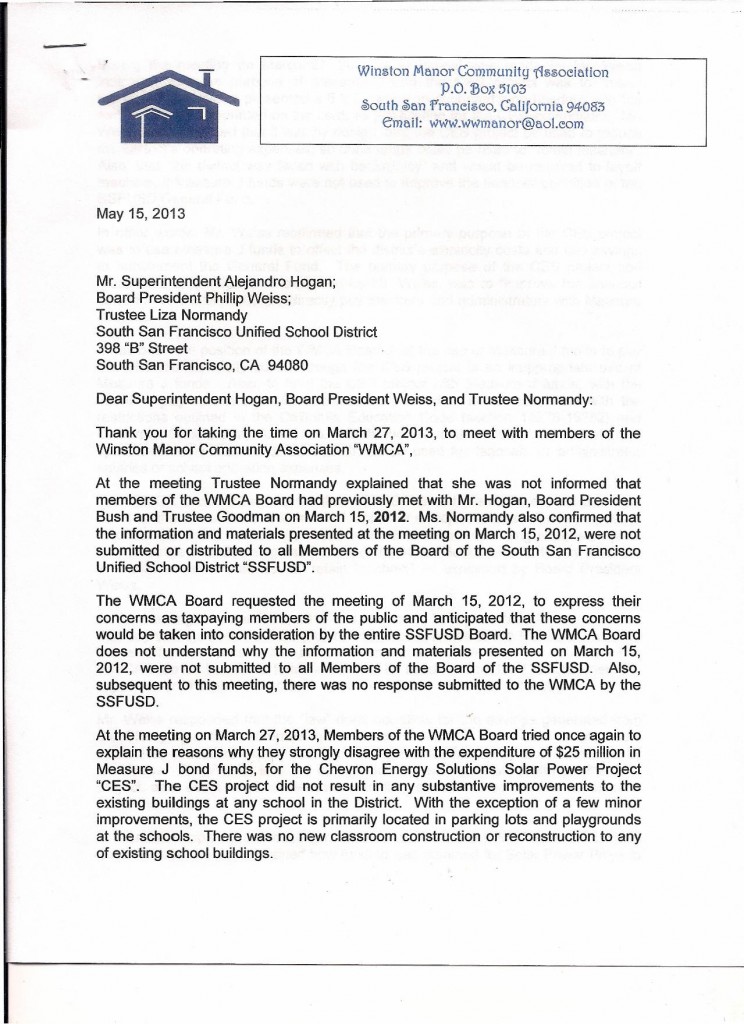 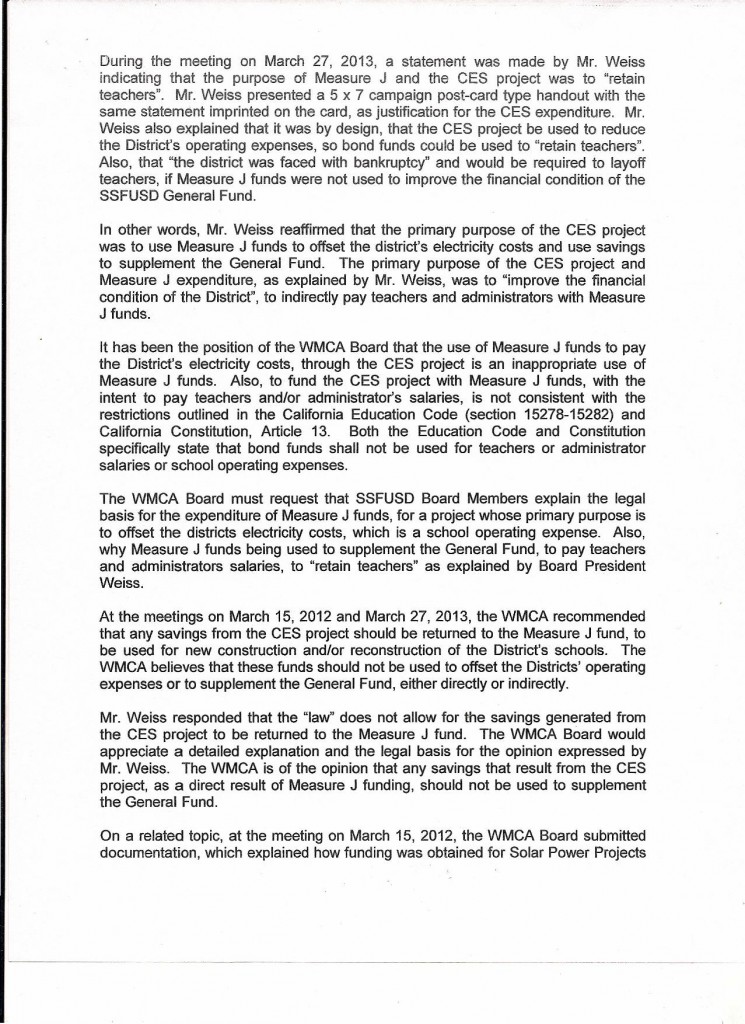 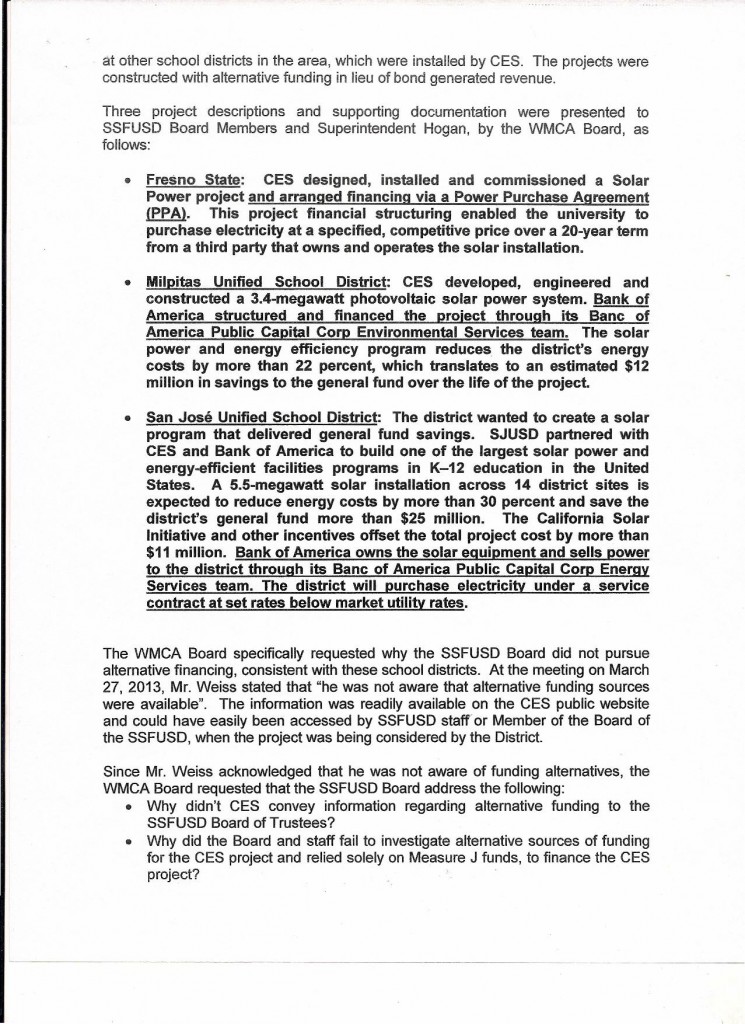 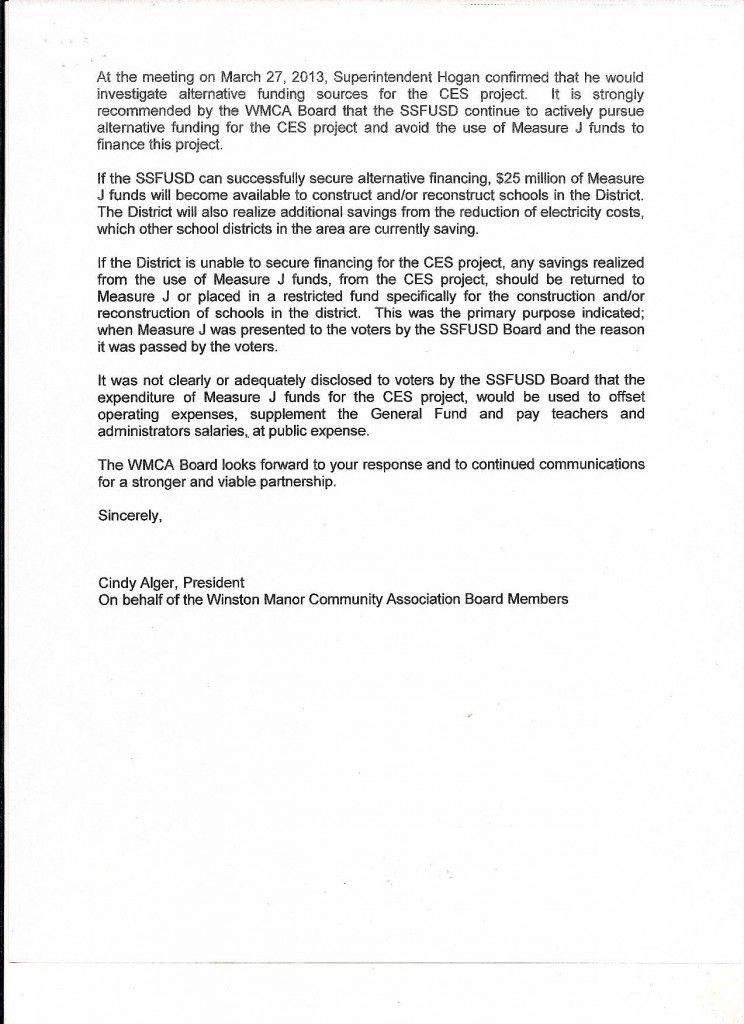 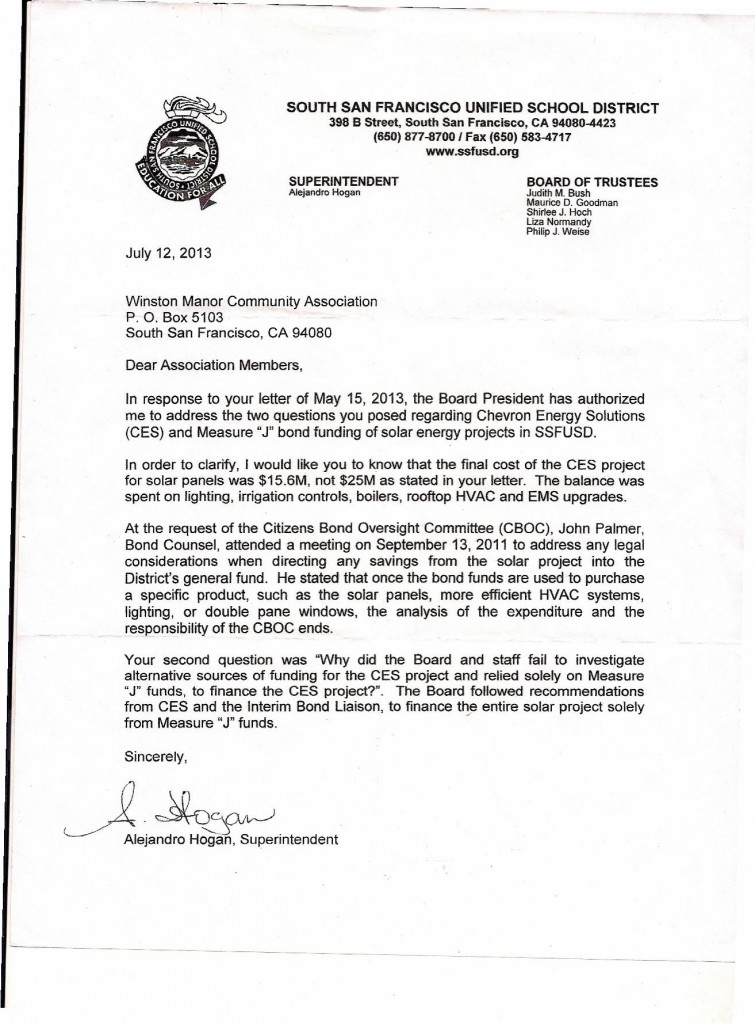 I agree with Winston Manor Community Association on this matter. If Measure J bond money is to be used for such a purpose any savings should be returned to the building fund. I also think there have to be many other possibilities for financing the solar installation than the above mentioned options.

I agree with Winston Manor Community Association on this matter. I also think there have to be other possibilities for financing the solar installation than the ab