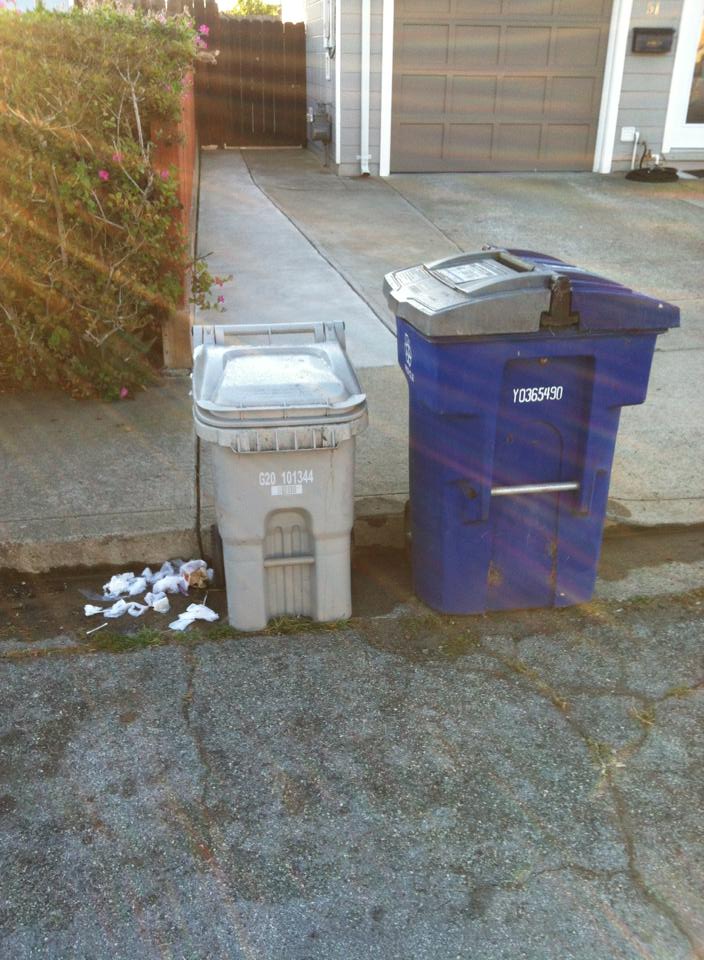 Who do you resolve the problem of garbage bins and parking with neighbors?
Photo: Jose Chavez

Sometimes we share a question on our facebook page and it takes on a life of it’s own, as this discussion shows.

Jose Chavez shared a concern about garbage that many others also share, “Maybe my neighbors will see this. They always put their cans right next to my property line, I’m to the left, the hedge, even if my car is parked right there. I have to move the car so the garbage workers can work. Also, aren’t we supposed to space them out? Very frustrated.”

Any thoughts? Here are some from other neighbors with the first two comments have the most folks agree with them.  While it may seem simple enough to just approach a neighbor with a concern, sadly we have become a society that barely talks to waves to those on our block as we come and go in our daily busy lives.

Ryan Rogers It’s sad these days that people can’t just work their issues between themselves they instead turn to the    internet to vent. People need to learn how to talk to each other, and I mean face to face, none of this texting crap.

Louie Zamboni They pick up the trash one day a week. GET OVER IT

Alexandra Carolina D’Vega I bet they are Chinese! !! They do it all the time..not been racist just realistic. .

Elysa Chalco The garbage men actually ask for the cans to be by each other. Easier to pick up. Less walking/stops

Ryan Rogers Get over it, this is stupid issue to get all worked up about. One day outta that week isn’t going to kill you.

Cristina Sandoval Some people don’t know how to relax, lol. This guy trips over everything.

Alan Lopez So many angry people on a Monday. Looks like somebody has the case of the Mondays (づ｡◕‿‿◕｡)づ

Jose Chavez Elysa, no, I was actually out there, the garbage guy actually thanked me for moving them for him, which I did. I put them back also.

Jose Chavez The neighbors are really nice actually. When they first moved in, I walked over there and introduced myself, for those of you assuming stuff.

YuSha Ng If you can’t find which neighbor does the can belongs to and can’t talk about it, try write a note and stick on the can?

YuSha Ng Agree with Amy and Jim, shouldn’t we put the garbage bins on curb side / own driveway?

Candice Lofton Stop blaming Chinese ppl. At least you have a home to complain about nonsense.

William Shon II Alexandra, pretty ignorant thing to say and it in fact reeks of racism regardless of your claim to the contrary. I’m not Chinese but the racist sentiment extends to me by virtue of simply being Asian since ignorant people think we’re all Chinese.

Mary An Stanley Our neighbor and I actually share my driveway ,we put all of our cans in front of my driveway so the garbage co. has plenty of room to operate …. I put them out , our neighbor collects the cans in the morning. Nice and easy. Try it .

Mary An Stanley And Alexandra , that was ignorant.

Rose Chang Chiu I think everyone in my neighborhood puts it like this in the parking space. The first thing that caught my eye was the mess next to the garbage cans though

I think it’s unreasonable to expect the poster to move his car once a week so that the garbage workers can empty his neighbor’s cans… unless that’s not this issue. What if he wasn’t there at that moment? Although that would be a great segue to knock on the door… it’s easier to say, “just to let you know, the garbage worker couldn’t get to your cans, so I moved my car. They said it would be easier for them if ….” rather than “Umm, put your garbage cans in your own driveway!” Good luck.

Alexandra Carolina D’Vega I DO NOT GIVE A DAMN!!! FREE COUNTRY FREEDOM OF EXPRESSION! Why IS IT SO FREAKING WELL TAKEN WHEN ANY COMIDEAN MAKES FUN OF CHINESE OE ANY OTHER RACE AND NOW U ALL GIVIN ME ALL THIS BULL S…..

Brian Perry Whose trash is in the gutter?

JoAnn Willis Why can’t your neighbors pick up the trash around the can?

Ron Johnson I agree if it bothers you that bad knock em over!!

Candice Lofton You are NOT a comedian. And it WAS NOT funny. Thats why!!! Hope you get dog chow mein next time you go for Chinese food. See, that’s humor!!!!

Laura Michaelis Sometimes there is a convenient language barrier like with my neighbors, sometimes they really don’t know. I used to yell at them, now I just glare at them.

William Shon II Alexandra It only APPEARS to be well taken because MANY Asians are not prone to standing up and not putting up with BS like all the ignorant racist comments that were posted when that Asiana flight crash landed. Do the people you know and hang around with make fun of Chinese or other Asians as part of your normal behavior? Yeah I thought so. I encounter certain people that are so surprised when someone like me calls them on it they get taken aback because they are so accustomed to freely insulting Asians. It happens OFTEN. Take a look here at this thread, there are people that are Chinese yet they haven’t said a thing. I’m SF born and raised and grew up next to the Western Addition so I grew up having to fight for respect on the street with non-Asians who slanted their eyes and did their stupid “ching chong” bit as though it was funny.

William Shon II People who come here from other countries often have different habits including not being considerate of their neighbors or just being inconsiderate in general, like leaving their carts in the middle of the aisle at Costco. That doesn’t mean they are the only ones, there is plenty of inconsiderate behavior to be found from home grown Americans.

Yolanda Calderon People are stupid…why he go over and invite them over for coffee …they are rude! Pick up your own garbage and put it in your own drive way. It isn’t his job to clean up after his rude ass neighbors.

Melanie Kreitz Your property line does not extend to the sidewalk or the street, if it bothers you, talk to to your neighbor like an adult.
As for the debate about racism, this post did not warrant the original racist comment and should have been ignored. Not worth people getting worked up about what some random person you don’t know said. 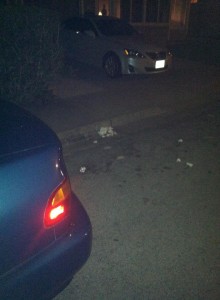 Jose Chavez Update 8:30 pm, mon. 10/14/13, came home, garbage still on the ground. I submitted a pic, don’t know if it will get posted, i tried to copy and paste in here, didn’t work. I guess I will take the high road and clean up after them for those of you who said, “get over it”. Anyhow, happy garbage day everyone! lol

Yolanda Calderon Clean it up off the street and into there drive way. By the car ..that should be funny

Jose Chavez Thanks, admin. Weinerd, I park and do not cross the line, yet they place the can literally about 6 inches from my car. I move my car forward on purpose, 1) so the mechanical arm of the garbage truck won’t hit my car and 2) so the garbage person doesn’t have to stop and get out to move the cans away from my car. One day, he won’t move them and my car will get hit. That is my point, and they have only one vehicle parked in front of their house, so they have plenty of space on the other side of their driveway. At night, I have one vehicle in my driveway and two right in front so the green vehicle needs to go right up to the line. I play musical chairs with the cars on Monday morning, garbage day, each week because of where they place the can.

Raquel Cordon-Curtis I would just move it to their side

William Shon II You have every right to park in that space if you wanted to, the property line doesn’t include the street. They should put their cans on the other side if it’s not being used. I would park in the space to give them a hint and mention to them in a nice way that you cleaned up the mess from their garbage can. I would say it may have come from the truck when they picked up or put the can down so they don’t feel like you’re accusing them of being thoughtless.

Christine Moore We have people like that also. Many people put their cans in parking spots. Why can’t they put them in driveway?

Q: What can I do to make sure my carts are serviced each week?

While the above instructions sound simple enough from the Scavengers, we all know in real life most streets do not have this amount of space to follow these rules.  And the debate will continue on. What do you suggest?

3 comments for “Trash Talk; When garbage comes between neighbors what do you do?”