This year’s BELL GAME was the best attended in recent history due to the beautiful new field at El Camino High School and this inaugural game.  Excitement has been high as El Camino Students have been selling T-Shirts and commemorative BELL Game tickets and pumping up their already high school spirit and COLT PRIDE has never been louder. Measure J Funds have done to rebuild a new track and field for ECH. We are sharing the excitement that was bouncing off of our Facebook wall with you here yet if you prefer a straight play by play you MUST CHECK OUT JOHN BAKER’S BLOG HERE. He did an awesome job of narrating the game and capturing some great photos – THANKS JOHN! (Frank Poncherello) 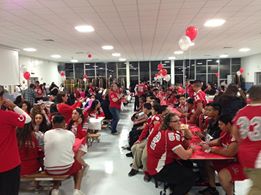 El Camino’s Annual BELL GAME dinner the evening before the day was a great success as Angelique Presidente’s photo shows.   There was a lot of chatter before the game on our Facebook page with everyone shouting out their favorite team to win and continued onto the JV game, which the Warriors won 21-0

Carla Barbetti Looks like the Bell Trophy won’t have to move too far. Get R Done – Frank Moro!!

Jesse Mohr That trophy looks so nice against a blue backdrop…GO WARRIORS!

Maria Maldonado Barba Let’s go Colts! It’s your time! You won it back in the day when I was a student at EC. Now win it while my kid is there!!! 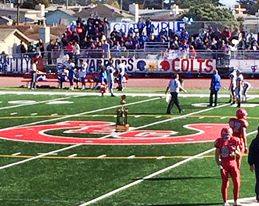 The BELL on display right before the ribbon cutting.
Photo Maria Maldonado Barba

Carole Brady-Duport One family member went to So. City and three went to El Camino. Have to be fair and root for both!

Kevin Cronin We got this…. Go Warriors!

John Kevranian I remember the Bell assembly we use to have at South City High!

Dawn Tentes you left out number 7 go keahi you got this but no matter what just have fun. but the bell does belong back at South City. go warriors.

Nina Markley As of right now I hear warriors are winning!!!

Nina Markley I rephrase that, j.v. is winning @ this time.

Leanne Gerardo Goff EC. Colts all the way ~ we want the Bell!!!

AND THE BIG GAME STARTS

We were lucky to have Frank Poncherello give play by play narrative for those who were not able to attend the game and those comments are mingled in with the other real time chatter by all (you can go directly to Frank’s aka John’s Blog HERE): 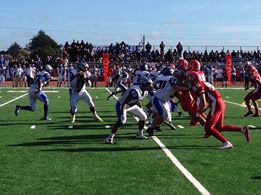 No score early in second quarter, but SSF is threatening.
Photo John Baker

Frank Poncherello No score early in second quarter, but SSF is threatening.

Deborah Mcgrath Warriors! !!! All hail the white and blue. . Ahhh that’s all I remember! Lol 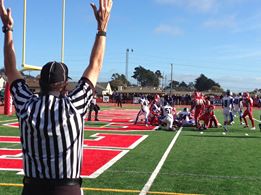 Andrea Peralta What is the score now?

Frank Poncherello SSF 13, EC 6, about a minute left in half. 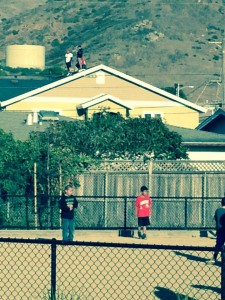 What a GAME! People watching from their rooftops!!
Photo: Myla Jessica La Rocca

Sian Roper It was a great game… South City went ahead with a minute and a half left… El Camino threatened to win but with like 10 seconds left, the ball didn’t make it thru the uprights…. JV game: So City won 21-0 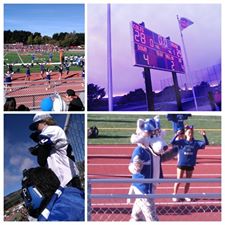 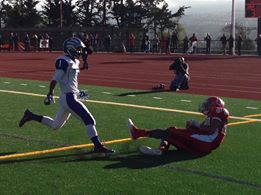 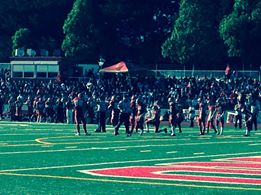 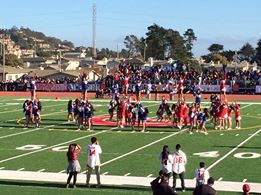 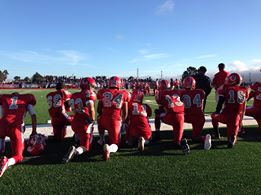 Time out right now for shaken-up EC player on the field. Don’t forget this game can be painful, folks.
Photo John Baker

Frank Poncherello If it stays this close , EC will seriously regret two missed extra point kicks. Time out right now for shaken-up EC player on the field. Don’t forget this game can be painful, folks.

Ayde-Jason Cervantes Is it over yet. Who’s winning 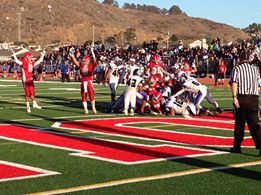 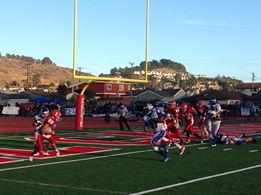 Frank Poncherello EC has ball at SSF 23 with exactly 30 seconds left. Time out.

Ayde-Jason Cervantes This is intense

Frank Poncherello Two runs get nothing. EC still on two. Burns last TO 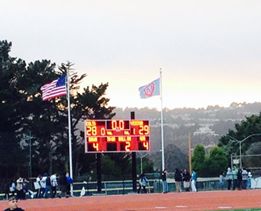 Debi Hdz’Horny Take them down Colts!!! You always did and always will!!!!

William Shon II What did I tell you in the days leading up to the game? Stats don’t mean a thing when SSF and Elco meet. The rivalry and competitive synergy takes the teams to another level. Good game SSF AND Elco! Go Warriors!

Frank Poncherello EC didn’t win the game, but the absolutely packed stands and beautiful new field have to soften the blow a bit.

On our FB pg: BIG Congratulations to both Varsity teams today – what a game 29-28!! Congratulations to the WARRIORS for retaining THE BELL! And to the JV Warriors Win! Big Salute to Cheerleaders of BOTH teams for bringing it all together – you rock! Thanks to everyone for the regular updates, Frank Poncherello (John Baker)  especially for the excellent play by play narration!

Frank Poncherello You’re welcome! I did a short writeup of the game, with a slideshow, on my blog HERE

Jose Valencia WAS THERE EVER ANY DOUBT?????

Angela Marzetta Who’s got the bell… SOUTH CITY GOT THE BELL!!!

Delaina Whetstone So sad Sam Fisher:-( using hate word like that ! You surely need educating You go Glenn I love the South City Pride and that song ……….

Syra Delgado Cooper WE ARE WARRIORS!!!!!

Diedra Walker Never any doubt WARRIORS all the way! !!!!

Ava Jalapeno Popper Romero I love the ECHS colts all the way, I am proud to be an alumini c/o 2007 and even I didn’t earn a high school diploma I earned a certificate of completion from ECHS in 2007, but still an alumini no matter what! go…….colts!!

Maribel Chiquinquira Segura This is my son last year at south city,and he is so proud and happy that j.v and varsity won the bell!!

Cesar Torres Had To Keep The Bell At Home Where It Belongs!! 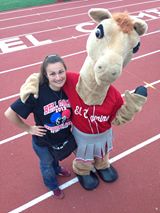 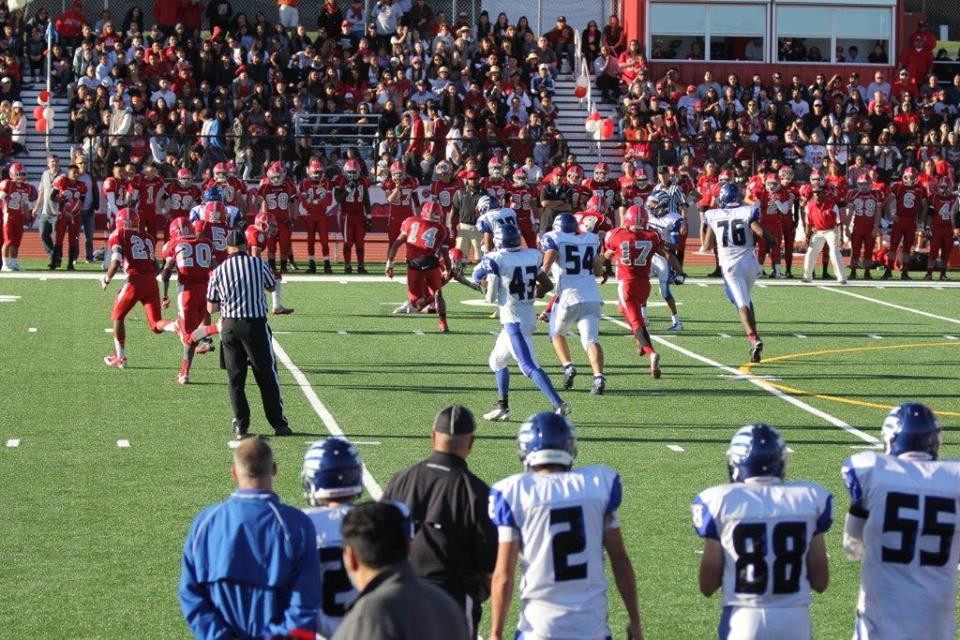 The bleachers were filled
Photo by Tim Hopkins

From El Camino High School Coach Jake on the Teams FB page: WOW, in 23 years of Coaching at EC this one hurts the most. I don’t know what to say, I feel like part of me died at that game today. Our kids gave a winning effort, but we did not win. This one will hurt forever. Thanks to all of you who have supported us this season.–COLT PRIDE And COLT supporters came away with an amazing attitude in this very close game played finally on COLT turf, a beautiful new field.

Angelique Presidente It’s still a hard loss to swallow BUT it was such an awesome game to be a part of. EC rocked our house and even though we didn’t get that W, I haven’t seen that team fight so hard and come together with all that energy all season – they really dug deep and represented EC well yesterday

Leanne Gerardo Goff I woke up this morning still upset…

Pauline Rodriguez I will tell you as an alumni this was a real special game. Not only was the field something to be proud of but the heart and guts of the team. They fought to the end and in all my years of Bell Games one of the most exciting.

Robert Barrett Yesterday’s game was the best high school game I have ever seen! EC football players proved to the entire city how tough they are! You guys make me proud to be an El Camino Colt! The EC coaches are awesome just as well! You guys turn young boys into young men! Thanks for your dedication! Colt Pride!

Maria Maldonado Barba It was a great game! The turnout was amazing! Ya, it sucks that we lost, but those boys played a great game! We will get them next year!!! Stay strong EC!

Calvin Roberts I thought today would be the day we got the bell back since 2003. Next year on their new field will be a sweater Bell Game Win for us.

Tim Hoppis get ’em next year!!

Frank Poncherello It was an amazing game. Tough for the Colts, I’m sure. PATs made the difference on both sides of the field.  On the plus side, the stands were full and the field was beautiful. EC should be proud.

Angelique Presidente This one hurt real bad cuz it was supposed to be a W! We were right there, plenty of opportunity just not enough drive

Fia Soliai To the El Camino Colts players….You guys are winners too, you guys came out and fought a very GOOD fight and nearly won. This game I must admit was ONE of, if not THE MOST memorable game in 30+ years! To the kicker, honey you did the best you could and you should not think twice about the last field goal attempt. This game could’ve gone in any direction, hence the tight score and the great drives on BOTH sides. This game will definitely go down in history as one of the TOUGHEST and BEST CHALLENGED BELL Game ever! GOD BLESS and Peace to ALL~~ South City Class of 84, mother of El Camino graduate ‘2008, aunt of Colt #69 and Warrior #32 both seniors<3<3Priscilla Fisaga Selianitis

Ed Perry expressed eloquently what so many COLTS were feeling: 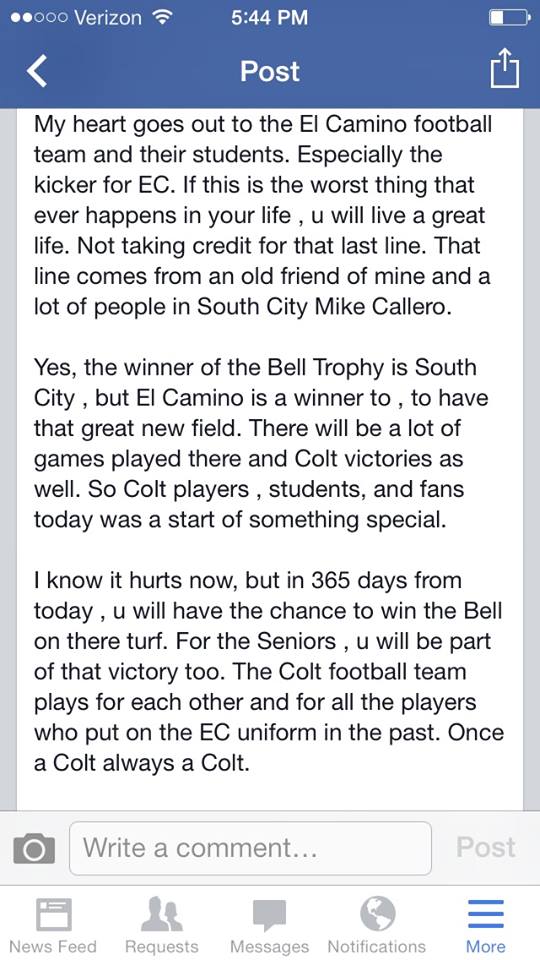 JR Makaiwi Proud of you guys