Are you ready to start rationing water? The time might be coming sooner than we think as we end 2013 as the driest year for San Francisco since recordkeeping began in 1849.  And the whole state of California is not looking any better with the May 2013 report from the Department of Water Resources stating there was only 17% of normal snow fall. And it hasn’t gotten any better.

Earlier this month California’s US Senator Diane Feinstein and US Assemblyman Jim Costa requested Governor Brown to declare an immediate state drought emergency for California and to ask President Obama for a broad federal disaster declaration.  The purpose of this would include ‘activating the State Emergency Plan and permitting relaxation and suspensions of some state statutes or regulations, and promoting water conservation, implementing expedited water transfer procedures, and providing status reports on the state’s water conditions.’

In 2008 then Governor Schwarzenegger issued an Executive Order after California saw 2 years of dry conditions with the state facing some major challenges. President Obama rescinded this order in March 2011. So once again we are reacting to another 2 dry years and needing support from the state and federal governments. The hardest hit will be our farmers in the central valley and throughout all of California. Dairy farmers in the North Bay are concerned of the lack of grazing for animals and are supplementing with hay at an additional expense to the farmers. The concern is how this could bankrupt family farms that have been in business for decades with many over a century old. A program offers farmers money to keep land fallow and divert water to cities, but the Kalin family from Imperial Valley have chosen not to.
Photo: Sandy Huffaker for The New York Times

Representatives of Central California (District 14)  have also joined in requesting a state drought emergency as well, spearheaded by California State Senator Andy Vidak in a letter written to the Govenor and signed by the Centeral Valley coalition: Senators Tom Berryhill, Anthony Cannella and Assemblymembers Frank Bigelow, Adam Gray, Jim Patterson, Connie Conway, and Rudy Salas.  They site their concern for the thousands of acres of farmland that will be taken out of production without water, the increased cost of business to provide supplemental livestock food, and reduction of jobs associated with farming and supporting those in the farming community; one in six jobs in California is tied to agriculture.  However today many farmers opt out of farming and sell their water sources for more than what they would make on crops per acre, a practice that has dire effects on the surrounding communities.

Aquafornia, a news aggregator covering California water news, brings home an important point many of us either do not know, or do not think about. “No other state has rearranged their environment to the same extent as California. The truth is, most of California is an arid semi-desert, with a climate similar to that of the North African Plain. Los Angeles is drier than Beirut. About 65 percent of the state receives less than 20 inches of rainfall per year, most of that in the winter months. While 70 percent of California’s runoff occurs north of Sacramento, 75 percent of California’s urban and agricultural demands are to the south.”

South City receives the majority of it’s water from Hetch Hetchy  via San Francisco Water and although the latest reports state the water quality is good, we have not yet heard how the Rim Fire and the large water resource

spent has impacted the drought numbers. But we do know that lack of snow fall has not replenished what would be expected in the water sheds.  Our city also gets less than 20% of water from 8 local wells and we have 14 storage reservoirs that hold 50,000 to 1,500,000 which is supplied by California Water Service Group.

In addition Westborough has it’s own water district (Westborough Water District) for the 12,000 customers within the square mile that they service with 100% of the water coming from San Francisco Water (Hetch Hetchy). They also have 3 tanks with 6.3 million gallons of water stored and state  an average daily consumption of 1 million gallons. 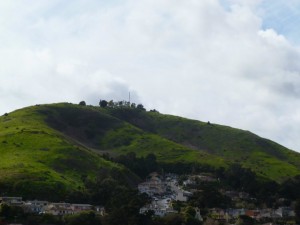 The north side of Sign Hill in it’s annual wintery green is brown and barren this year.
Photo: Everything South City

Just looking up at Sign Hill or San Bruno Mountain, which is generally dressed in a deep green at this time of year, and seeing the brown parched landscape, we know we best start preparing on how best to use, and save, water. Because water is not quite the  renewable resource we  all have been led to believe, and California left in her natural state is more desert than lush oasis.

[…] City first reported our local need to conservative in a December 2013 article which can be accessed HERE. This gives additional state wide information on drought conditions 9 months ago and we have not had […]

[…] This incredible weather is also causing us to seriously step up our water conservation. Leave your tap running for less time at less force. Use gray water, like rinse water from your washing machine, to water gardens.  More on the weather impact on our water sources can be read HERE. […]