One of our Sunshine Garden neighbors called 911 after hearing two guys messing with their car over early yesterday morning. Upon arrival police found  Jesse Jimenez and Juan Garcia  in possession of stolen property valued at more than $1000.00  ESC gives a HUGE Shout Out to the neighbor that called PD and to SSFPD for making these arrests. And a HUGE thumbs down to Jimenez & Garcia!!

One of the neighbors reported on our Facebook page they were one of the victims. She said she went to the police department to identify her items and was surprised at how petty the items were that were stolen. Which included her teeth which she had taken out while driving and experiencing a migraine.

This is from Rich Joylnne:

So this morning I go out to water my plants and I notice the police down the street. as I get to the plants by my car I notice the front door of the truck slightly open. So I look in and the glove box is open. Then I go over to my little blue car and look in and see its all ruffled through. No money was taken. Bills still in car. But they stole my teeth. Hello? No tools were taken out of the truck. I wave the police over to my house and they say about 12 or more cars on morning side were gotten into in the middle of the night. They caught two guys. They told me I could go down to the police department as they confiscated the stuff there. So I get there. Lo and behold my teeth were there. Lol. Who would want to steal teeth. Then they asked me if anything else was missing. I said can I see the bags. When they brought them to me the stuff was so petty that was taken. Phone chargers. I little am radio battery operated. Just nothing. So stupid. The only thing worth anything was my teeth. 2000. worth. I doubt they knew that though.

On 01/14/2014 at approximately 0427 hours, Jesse Jimenez and Juan Garcia were found in possession of property valued at more than $1000.00 stolen moments prior from several vehicles (both locked and unlocked) in the area of the 200 block of Forestview Drive in South San Francisco . Police had responded to the area after a resident overheard the sound of two subjects attempting to remove a license plate from a parked vehicle and called “911” for police assistance. The police quickly located Jimenez and Garcia walking away from the area with the property. More than ten vehicles were linked to the incident with reports coming in to the Police Department for several hours after the arrests. 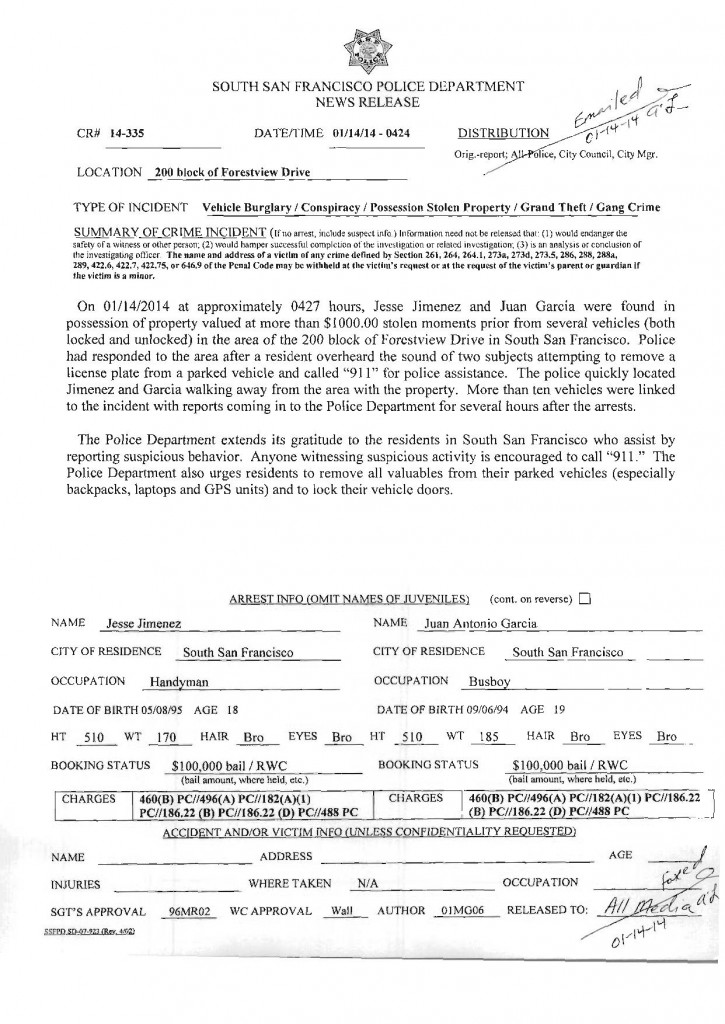