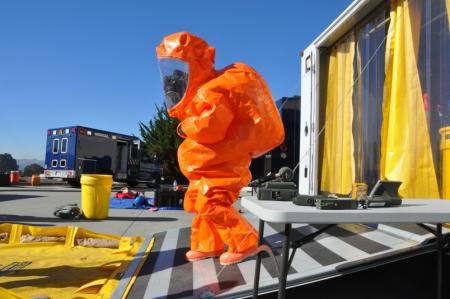 SAN FRANCISCO – An employee goes rogue and sets off an explosion inside the urban headquarters of a large biotechnology company. A hazardous materials team from the company makes entry into the smoking building but must withdraw after detecting radioactivity. Local first responders that have arrived on the scene determine that it’s time to call in the experts.

The alert is sent out and the California National Guard’s 95th Civil Support Team (CST) is on the way.
The scenario was part of a multiagency bioterrorism exercise, called Operation Pure Cure, which took place Jan. 22 at the South San Francisco headquarters of Genentech, Inc.

The 95th CST conducts several exercises a year with civilian first responders to test their ability to work together during a chemical, biological, radiological or nuclear (CBRN) event.

“The unique opportunity for this training was that we were able to use public, private and National Guard assets, and in the scenario the private asset was very capable with a hazmat response,” Whitley said. “Most companies don’t have a hazmat team to respond to incidents like this.”

South San Francisco Fire Department Battalion Chief Jess Magallanes was the incident commander in charge of the agencies that had responded to the simulated attack.

Magallanes said the purpose of the exercise was to test the emergency response system during an incident that is a bit larger than what local agencies are used to handling.

He said the 95th CST is a valuable resource that local agencies can call on for its specialized equipment and expertise should a CBRN incident occur.

“They’re able to basically scale everything up much bigger than my department with 70 sworn personnel can do,” he said.

The 95th CST is composed of 22 full-time soldiers and airmen. The team is operational 24 hours a day, seven days a week, on call to assist civilian authorities in the event of a CBRN incident.

The team’s area of responsibility is Northern California, while its counterpart, the 9th CST, is responsible for the southern part of the state.

The 95th CST soon arrived at the Genentech facility, staged its vehicles and prepared for action.

Maj. Christopher Angle, 95th CST Deputy Commander, was the officer in charge of the team for the exercise. He linked up with the incident commander and a Genentech official in charge of the company’s assets. They determined that entry teams should be sent into the building to find the source of the radioactivity.

CST entry team members Sgt. Michael Evans and Spc. Alyssa Quinn suited up in Level B hazmat suits and prepared to enter the smoke-filled Genentech building where the simulated blast had occurred.

The CST entry team and a two-man team from the San Mateo County Hazardous Materials Emergency Response Team then made a joint entry into the hot zone. The teams used specialized equipment to search the smoke-filled hallways and offices.

“Our primary mission was to locate and presumptively identify the strongest radiation source we could find, which was what initially had the Genentech team withdraw from their entry,” Evans said. “When I made entry, it was my job to relay back to the cold zone operations what the site looked like, to get eyes on.”

Sgt. Alex Zonio, the downrange entry team leader, supervised the CST entry team from the staging area outside. “They’re performing a reconnaissance mission, painting the picture for everyone else,” he said.

Evans and Quinn relayed what they were seeing to the team outside which was determining what the hazards were to people downrange.

The two entry teams entered a darkened room that was filled with thick smoke. They found a work bench surrounded by broken glass. Their sensors led them to a five-gallon bucket, inside of which they found the radioactive source—uranium-238.

After leaving the building, the two teams were scrubbed down and decontaminated in the CST’s decontamination trailer.

“It was a very successful mission,” Angle said. “We established a unified command. There was a joint interagency effort for the objective, combined entries, combined mission tracking. We attacked the incident commander’s objectives concurrently.”

Nick Gottuso, a district coordinator for the San Mateo County Sheriff’s Office of Emergency Services, was acting as the site access control leader during the exercise. He said this was his first time watching the 95th CST in action and that the exercise was a valuable test of interagency emergency operations.

“I think that the only way that we ever find out if all these emergency plans work is to exercise them in an event like this,” he said.