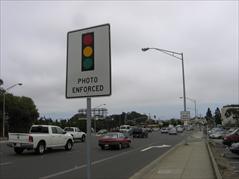 SSF City Council voted last evening(March 27) in favor of not renewing the  contract with ATS for the red light cameras in South City with a 4-1 vote as Mayor Matsumoto voted to keep them.  Public Safety Chief Massoni and his staff prepared  a detailed report including stats on tickets/ accidents for those intersections as well as others in our city.  Based on these reports the recommendation was to remove the lights on El Camino Real at Chestnut/ Westborough and the camera light on El Camino Real at Hickey. This detailed information and the statistics will be useful to help identify the areas and times when an increase in PD presence will be beneficial. The lights will remain intact and active until mid-August when the contract will expire.
More info on this link HERE (scroll down to item 10 Public Hearing) where you can also access the staff reports that contain the stats and background information.

Our facebook community had much to say when we announced the news with over 200 people LIKING the post. Here are some of the comments:

William Shon II I personally didn’t mind the red light enforcement since I don’t run lights, however there are issues with the service itself. Some examples: http://photoradarscam.com/malfunctions.php

Jim Chazer What was their reasoning? Those lights are the only reason my wife comes to a complete stop. So if she ever runs over a pedestrian, blame the city council.

Randy Quok to Jim Chazer: What!!??

Phil Fioresi Sr. to Jim Chazer:  I like the humor Jim, Some people have none

Adrienne Soto Where at all off them that’s great!

Aaron Grgich to Jim Chazer:  Haha so it’s the city councils fault that your wife can’t follow a simple rule?? Gimme a break.

Jim Chazer to Aaron, send me your address so I can mail you a quarter to put in your sense of humor fund.

Aaron Grgich to Jim Don’t try and turn it into sarcasm now, Cheezer!

Patricia Baker It is good to see that South City is doing away with this foolishness. All it did was take $ from people turning right on red who were no real danger. And lined the pockets of that Arizona company.

Christina Barnett Haas IT’S ABOUT DAMN TIME!!
These cameras are more of a nuisance than a help!
Thank you!!!

Daniel Schlimmer Thank goodness these cameras are going away, all I could count on was getting blinded by those awful flashbulbs after stopping & turning right on red.

Douglas Sellick They got me at Chestnut & El Camino. Traffic school and over 100 dollar ticket but it didn’t go on my DMV driving report

Joann Swanson Remember they still work till August. I don’t know the date that they get turned off but it is in August.

Gerardo Sanchez Finally! ….. SSF IS GOING TO STOP HASSEL THE CITIZENS THAT WORK HARD TO SUPPORT THE FAMILIES.

Randy Quok I think studies have shown red light cameras have done very little in preventing red light accidents. It was a waste of money IMO.

Aaron Grgich Well I guess I better head on over with my sawzall get those things taken down.

Phil Fioresi Sr. The only council member who voted to keep the lights was Matsumoto, WE NEED TO VOTE HER OUT! she is bad for our city

Douglas Sellick Does that mean they will refund all ticket refunds

Phil Fioresi Sr. lori those cameras will still be there it’s only the red light cameras

Nick Delorio thank god im tired of those random flashes blinding or randomly scaring the crap out of me on a left hand turn… not to mention the fact that things are a complete scam and 80% of the proceeds go to the camera company. good riddance.

Stephen Lynch If you live within 3 blocks on a foggy night it’s like lightning every time the flash goes off, very annoying!

Gottalove Sleepyhead I hope they remove all of them.

Jason Yee I will miss the exaggerated stops that I would do on the corner of Westborough and El Camino.

Teresa Teani Jason I do the same!

Buster Harper The sheriffs got me and I’m doing 85

Anita Porpoise We don’t have Sheriffs.

Janel M Chrestenson Pearson Keep those signs up no matter..

Dana Compani They were entrapment, pure and simple. Glad most of the City Council members got it right.

Jeannette Yesitsnineletters won’t miss the flashes in my face when I’m at Chestnut/El Camino!!

Karen Davenport The cameras at Westborough malfunction quite often. One time, I was the only one in the intersection, and it took a picture of me going through a green light!

Norman Guerrero It must of not made that much money for the city for them to take it out!

Moserod OSe It was making money for the camera co. that installed them, very little went to the city.

Matela Benpana Finally! These traffic cameras are just used to collect money from people. It’s a shame they lasted that long. I paid a big chunk of ticket by traffic camera and the big chunk of money goes to a private company -that’s absurd!