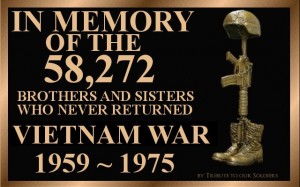 Over 100 of our neighbors agreed with our post on our FB page Saturday which was VIETNAM VETERANS DAY. Many added comments of appreciation and Mareth Vedder speaks for many of us,  “This has been a long time coming, and I know Vets from South City who were not treated well after serving. They will appreciate this!”

BY THE PRESIDENT OF THE UNITED STATES OF AMERICA

On January 12, 1962, United States Army pilots lifted more than 1,000 South Vietnamese service members over jungle and underbrush to capture a National Liberation Front stronghold near Saigon. Operation Chopper marked America’s first combat mission against the Viet Cong, and the beginning of one of our longest and most challenging wars. Through more than a decade of conflict that tested the fabric of our Nation, the service of our men and women in uniform stood true. Fifty years after that fateful mission, we honor the more than 3 million Americans who served, we pay tribute to those we have laid to rest, and we reaffirm our dedication to showing a generation of veterans the respect and support of a grateful Nation.

The Vietnam War is a story of service members of different backgrounds, colors, and creeds who came together to complete a daunting mission. It is a story of Americans from every corner of our Nation who left the warmth of family to serve the country they loved. It is a story of patriots who braved the line of fire, who cast themselves into harm’s way to save a friend, who fought hour after hour, day after day to preserve the liberties we hold dear. From Ia Drang to Hue, they won every major battle of the war and upheld the highest traditions of our Armed Forces.

Eleven years of combat left their imprint on a generation. Thousands returned home bearing shrapnel and scars; still more were burdened by the invisible wounds of post-traumatic stress, of Agent Orange, of memories that would never fade. More than 58,000 laid down their lives in service to our Nation. Now and forever, their names are etched into two faces of black granite, a lasting memorial to those who bore conflict’s greatest cost.

Our veterans answered our country’s call and served with honor, and on March 29, 1973, the last of our troops left Vietnam. Yet, in one of the war’s most profound tragedies, many of these men and women came home to be shunned or neglected — to face treatment unbefitting their courage and a welcome unworthy of their example. We must never let this happen again. Today, we reaffirm one of our most fundamental obligations: to show all who have worn the uniform of the United States the respect and dignity they deserve, and to honor their sacrifice by serving them as well as they served us. Half a century after those helicopters swept off the ground and into the annals of history, we pay tribute to the fallen, the missing, the wounded, the millions who served, and the millions more who awaited their return. Our Nation stands stronger for their service, and on Vietnam Veterans Day, we honor their proud legacy with our deepest gratitude.

NOW, THEREFORE, I, BARACK OBAMA, President of the United States of America, by virtue of the authority vested in me by the Constitution and the laws of the United States, do hereby proclaim March 29, 2012, as Vietnam Veterans Day. I call upon all Americans to observe this day with appropriate programs, ceremonies, and activities that commemorate the 50 year anniversary of the Vietnam War.

IN WITNESS WHEREOF, I have hereunto set my hand this twenty-ninth day of March, in the year of our Lord two thousand twelve, and of the Independence of the United States of America the two hundred and thirty-sixth.