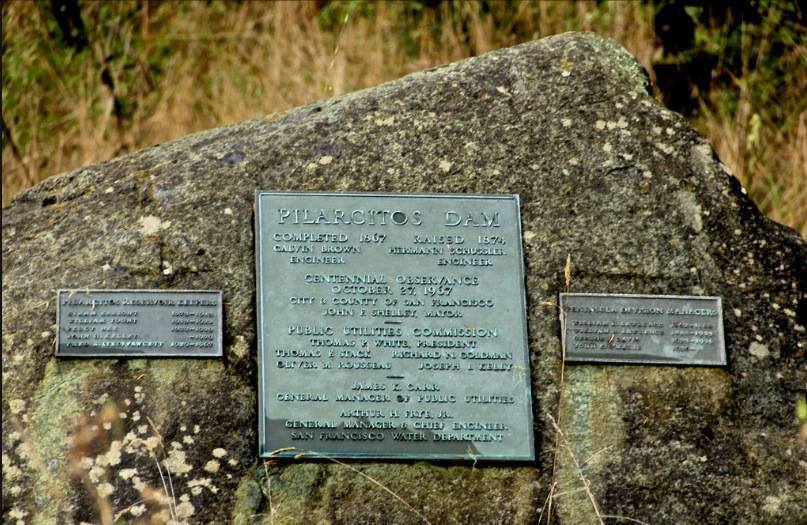 ‘This plaque at Pilarcitos Dam is on public land, paid for with public money, commemorating our common history, yet no one in the public is allowed to visit this historical place.’
Photo from Open SF Watershed FB

How many times have you driven by Crystal Springs on the Peninsula, scanned across the mountain slopes and wished you could walk through them?

Andy Howse has that experience on Interstate 280 nearly every day.

In the past month, he’s taken it another step. He started a Facebook page called “Open the SF Watershed to hikers” and has engaged policy makers at the San Francisco Water Department and S.F. Public Utilities Commission, which controls the watershed.

Vincent Mazzaferro of the PUC said he is reviewing Howse’s proposals, researching the case, and is appraising the options with PUC staff.

In 2003, after years of study, the Water Department and PUC agreed to allow group hikes, bike rides and horseback rides with trained guides by reservation on 9.5 miles of service roads. That trip spans from a quarry near Highway 92, and then, via Cahill Ridge and Fifield Ridge, to the gate near Sweeney Ridge above San Bruno. From trailhead to trailhead is 11 miles one way, one of the epic trips with a shuttle you can do in a day in the Bay Area.

“It’s been more than 10 years and we haven’t had a single negative issue,” Howse said. When people learn about a place and fall in love with it, he said, they always take care of it, just as people who control the watershed.

In recent years, the S.F. Water Department has been more responsive to recreation needs than at any previous time in its history. Last summer on the Tuolumne River, for instance, its Hetch Hetchy Division pulsed water flows in a dry year so the flows were timed and tailored for the best possible rafting all summer long.

Howse proposed to open only existing service roads to hiking. That would include the road that is routed up the east side of Montara Mountain, which would allow a one-way trip from Sweeney Ridge to Montara State Beach, or “Sweeney-to-the-Sea.”

Tom Stienstra is the Chronicle’s outdoor writer. E-mail at tstienstra@sfchronicle.com.

NOTE: Everything South City is committed to responsible use of our public open spaces. To that end we will continue to share information about the progress of opening San Francisco Water Shed (Crystal Springs Area) and the preservation of all of Sign Hill which currently has 20 acres for sale.

Please check out Open the San Francisco Water Shed website HERE to stay updated with the progress being made.  To follow on their facebook page go HERE

All nature lovers should be following Tom Stienstra, more info HERE and his articles for the SF GATE can be found HERE

About the efforts to open the watershed from Open the SF Watershed FB page:

The SF Watershed is a 23,000 acre open space on the SF Peninsula.
We want this watershed open for public hiking.
Description

The SF Watershed is a 23,000 acre open space on the SF Peninsula. It has an existing trail system, Pilarcitos Lake (San Francisco’s original water source) and many other historical points of interest.

It is only open to select SF water department employees who guard it jealously.

The watershed just north of Highway 92 and the large 65-million-gallon Pilarcitos Reservoir are marvels of human engineering and natural beauty, although few can see them today. Managed by the San Francisco Public Utilities Commission, the area today is like some undiscovered paradise with only the relics of human existence. Off-limits for more than a century to most people, the 23,000-acre Peninsula watershed and its massive engineering legacy have ironically become the area’s greatest nature preserve.

The area includes thick forests of redwood, cypress and oak trees and is regarded as the most bio diverse spot in the Bay Area with the largest concentration of endangered species, including the red-legged frog, marbled murrelet and San Francisco garter snake. We take the position that this land should continue to be protected, but it belongs to all of us and should be open to hiking.

Specifically we would like these trails opened, if only these trails were opened the vast majority of the watershed would still be closed to public access. None of these would approach the Crystal Springs Reservoir and we recommend a boundary similar to the one on San Andreas Lake on Sawyer Camp Trail for Lake Pilarcitos.

1. The Fifiefeild-Cahill trail, otherwise known as the part of the Bay Area ridge trail should be opened to the public, not docent led, but really open to the public. We don’t believe the program in place now is real public access to this public trail.

2. The Whiting Ridge Trail. The connector trail from Sweeny Ridge that goes westward to connect to McNee Ranch should be opened.

4. Portola Road that connects Sawyer Camp trail to Fifiefeild-Cahill trail should be opened. This is the trail that runs up the hillside south of San Andreas Lake and north of Upper Crystal Springs Lake.

5. The Spring Valley Ridge Trail, that is the connector trail from the top of Montara Mountain and would connect to the Whiting Ridge Trail.

6. Old Cañada Road runs parallel to Cañada Road but on the other side of lower Crystal Springs Reservoir. It continues south through Filoli and ends up on Edgewood Road. There is a spur on this trail that goes to the Water Temple north of Filoli.

The beef is simple: For the past 100 years, a handful of watershed employees, rangers and politicians have used these jewels as their personal reserves to boat, fish, and hike in some cases, live. All we asked for are the same opportunities. Nobody wants to see any of these gems blemished in any way and we believe that it is possible for nature and hikers to peacefully exist together in this area.

For those who think that opening the watershed to hikers will destroy it, We disagree for these reasons:

The East side of the Lakes (San Andreas and Crystal Springs) has been open to the public for years. The access to the water is restricted by a fence that does not disrupt views of the lakes. In the year 2000 Jean Rushmore of the Bay Area Ridge Council Said “Water quality is not damaged by Sawyer Camp Trail, which is right next to the lake. This trail is 1,000 feet up and a mile away. It’s wide; it’s all graveled; it’s used by service trucks and heavy utility vehicles. There is not a bit of untouched dirt on the road”. The argument of not allowing hikers into the watershed because it will disrupt water quality is ludicrous.

Furthermore there are several thousand acres of land (with and existing trail system) that are nowhere near either of these reservoirs. Lake Pilarcitos was the original man made water source for San Francisco using redwood flumes they moved the water for the city, a trail can be easily put next to this lake similar Sawyer Camp Trail near the Crystal Springs Lakes and the San Andreas Dam.

Local State and County parks and the repair they are in demonstrate that we are a responsible public cares for and cherishes our outdoor lands. We have not heard any controversy over public access in Point Reyes National Seashore, Big Basin or Muir Woods lately. Simply manage the trail system, do not allow vehicle access and improve the quality of life of the public in San Francisco and San Mateo Counties dramatically. These lands we are discussing are at least as wonderful. If you talk to the workers who work and live there they will assure you of that.

On the southern end of these lands (off 92) there is an active rock quarry and also a working garbage dump . If these corporations are allowed to tear up the earth on these lands, why are we not allowed to be peacefully walking across them?

Tom Stienstra writer for the SF Chronicle wrote in 2003:

“The biggest shock will be that the 23,000-acre Crystal Springs Watershed is not the pristine wilderness that many imagine. Instead of trails, access is on roads. There is also the distinct sense that somebody is living here. That’s because there are eight homes subsidized for water department employees, so the roads are driven regularly. In addition, there are also two rock quarries, heavy equipment, boat docks, boats and picnic sites for the water department folks.”

We take the position that this land belongs to all of us, to enjoy and protect. Not simply a select few who keep these lands to themselves, and defend their actions with hollow arguments. SF Watershed is not closed for environmental reasons.
Rather the SF Water Department has used this land as their personal hideaway for so many decades that they would not only have to give it up, but admit that they have used public land as their own personal oasis with public money all that time as well. This is public land, and should be opened for public use. This is not private land owned by the SFPUC.