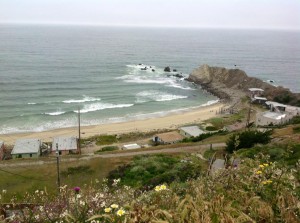 ‘While not quite as secret or hidden as our San Bruno Mountain exploration of the Crystal Caves, who knows where this historical treasure sits?’ was the question we put out on our Facebook Page. Below is the exchange from our neighbors. What stories do you have to add?

Jenny M. Montañez Shelter Cove!! Too bad the residents there get pissed if you trespass…

William Shon II Even on the beach?

Jorge Junior Pacifica, up around the Ace hardware little shopping center on the side of Linda Mar Beach!

John C. Baker Yep. Jorge beat me to it. 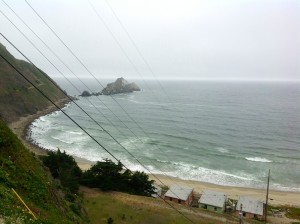 Keri Stark i went to a Halloween party out there one year. the house was so cool. it had sooo much history. it had been used to run whiskey back during prohibition. and the girl’s dad had amazing pictures…one had been taken of him (if i remember correctly) during the big storms in the early 80’s. he was on his porch and as the story went, the porch washed away with the next big wave.

John Cain Pacifica!! I have been back their many many times…….it’s awesome.

Justin Guzman I’ve been out on that rock before! People actually fish off of it, and you can only access it at low tide.

Jennette Mae Keleise Where are the CRYSTAL CAVES ? I lived in San Bruno my whole life & never heard about them!!

Keith Bokelund I live across the street from the mountain …there is no such place, I assure you. People tell me all the time there’s missile silos and trolley car tracks running through the mountain ,I tell them to put the pipe down.

Everything South City to  Keith Bokelund they do exist! Check out our story HERE. 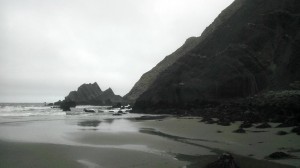 Mick Wedley ohh and while we talk of caves, San Pedro Rock has at least 2 that ive found, crawl down into this one, at a good minus tide, walk through to other side

Mick Wedley ohh and while we talk of caves, San Pedro Rock hasat least 2 that ive found, crawl down into this one, 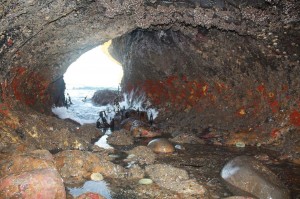 San Pedro Rock cave at minus tide. Always be mindful of the tides, they can move fast.
Photo: Mick Wedley

at a goodminus tide, walk through to other side

Everything South City Awesome! Thanks for the share! {ksw}

Alexandra Luna Thanks everyone. Pictures are great.

Seven Mile House Top photo Shelter Cove for sure. There is no way to drive into that neighborhood because the 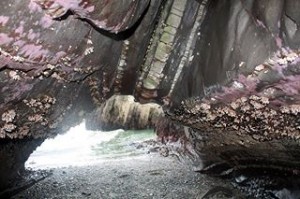 This exit takes a bit of a climb
Photo: Mick Wedley

road got ruined and was never repaired. Nevertheless, the inability to drive in has made the area more special and coveted. There is a long waiting list just to apply to live in this secluded community. Thanks for the photo ESC!

From Wikipedia, the free encyclopedia

Shelter Cove is a 17-acre (6.9 ha) beach neighborhood at the southerly edge of Pacifica, California consisting of seventeen rustic rental cottages owned by Arno Rohloff since July 1997.[1] Historically it was a recreational beach and popular San Francisco tourist destination–Shelter Cove was a picnic day stop along the Ocean Shore Railroad during its heyday, and later through the Prohibition Era up until the 1940s.[2] A restaurant and bar, the Clipper Ship, operated at Shelter Cove for many years during this period. Ever since the access road washed out during a 1983 storm, this neighborhood and beach is accessible only by footpath or boat.[1] Public access to the Shelter Cove beach from this road and footpath was closed in 1975.[3]

The Shelter Cove beach has recently been a center of attention as result of a public beach access prescriptive easement complaint lodged with the California Coastal Commission.[4][5] On March 19, 2008 the City of Pacifica filed a court action to force the maintenance of the footpath and hillside from risk of landslide.[1] On January 20, 2009 the planning commission of Pacifica gave permission to Arno Rohloff to repair a staircase to the property since the footpath has fallen completely into the sea.[6]

Along the California coast the general public has historically used numerous coastal areas. Trails to the beach, informal parking areas, beaches, and bluff tops have provided recreational opportunities for hiking, picnicking, fishing, swimming, surfing, diving, viewing and nature study. California law provides that under certain conditions, long term public access across private property may result in the establishment of a permanent public easement. This is called a public prescriptive right of access.

The Coastal Public Access Program includes a prescriptive rights element whereby the Coastal Commission researches and inventories the historic public use of areas with the potential for significant public access benefits. Where research indicates that the public use is substantial enough to create potential prescriptive rights, the Attorney General’s Office has the authority to proceed with the legal action necessary to protect those areas.

For a fuller description see Some Facts About Public Prescriptive Rights. [in PDF]

A prescriptive rights investigation includes documentary searches, on-site inspections and questionnaires and interviews. The most important source of evidence is from the public, persons familiar with the past and current uses of the property. The loss of historical access and recreational sites funnels a growing population into fewer and fewer areas and can reduce the range of uses as well. Public participation is critical to establishing the right to continued public use.

You can help in our research by reviewing the following list of access locations currently under study by the Commission. Please click to link to the graphics and questionnaires for individual sites.

If you have used any of these areas, please take a few moments to print, complete, sign and return the Questionnaire and Declaration to:

For more information or to receive hard copies of the questionnaires, please contact Linda Locklin at llocklin@coastal.ca.gov or 831-427-4875.